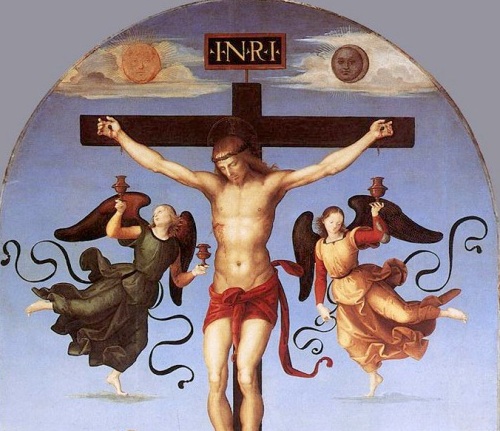 Mahlerman offers a feast of great music for Easter Sunday…

On this day last year seasoned Dabblers may remember that we travelled east, to the bleak wastes of Russia, and found Easter nourishment in the company of Sergei Rachmaninoff and his musical father Tchaikovsky. This year we discover inspiring music closer to home in Italy, Flanders, and 20th Century Albion.

It is September 1910 and in Gloucester Cathedral at the Three Choirs Festival the Fantasia on a Theme of Thomas Tallis is receiving its first performance, conducted by its creator Ralph Vaughan Williams. The piece was an instant success and marked a turning point in the fortunes of the 38 year old composer. For the rest of the concert the great man took his seat next to a dumbstruck Herbert Howells, a raw 18 year old aspirant who, 26 years later in 1936 would produce a masterpiece of his own, the six movement Requiem, written in the shadow of the death of Elgar (1934) and, more poignantly, the passing of his own son Michael of polio in 1935, a blow from which he never properly recovered. Here, the third movement Requiem aeternam(1) moves, almost imperceptibly from desolation to a kind of hope.

Almost exactly 400 years earlier, across the English Channel in Mons, Belgium, the Flemish master Orlando di Lasso took his first breath. But curiously, apart from the lists that contain Rene Magritte and Jean-Claude Van Damme, the ‘Muscles from Brussels’, he rarely features in any manifest of famous Belgians. So beautiful was his speaking and singing voice that, as a child, he was thrice kidnapped to be placed in choirs as far apart as Sicily and Munich. It is a measure of his reputation as a composer of sacred music in all forms that at this period, the first century of printing, he left more than 2000 compositions at his death in 1594. The Lagrime di San Pietro, the ‘Tears of Saint Peter’ are a set of madrigals that date from the last year of his life. Here, the last of the set of 21, Vide homo; music to stop the clocks.

Jean-Jacques Rousseau, writing in 1754, described the opening heartbeats of the Stabat mater of Giovanni Pergolesi as ‘the most perfect and most touching to have come from the pen of any musician’ and it does indeed have the timbre and feel of an age beyond the 18th Century – the harmonic language, and the composer’s grasp of chromaticism, make this extraordinary piece unique for its time, particularly when we consider that Pergolesi was in the last year of his life at the age of 26, dying of tuberculosis a few weeks after finishing it. Here, the incomparable German countertenor Andreas Scholl is joined by his sister Elizabeth. Gottfried von der Goltz conducts the Freiburger Barockorchester.

Back in 1994 the BBC commissioned a work from the rising (now risen) Scottish composer James MacMillan. The result was the Seven Last Words from the Cross, which the Beeb subsequently screened on the seven separate nights of Holy Week. MacMillan and his wife Lynne are lay Dominicans and his Roman Catholic faith has strongly influenced most of his work, not least in the effort required to make sense of the dramatic events that led up to these seven ‘utterances’. Here, the third movement comprises a setting of words from a Good Friday antiphon Ecce Lignum Crucis, and takes its name from the words of Jesus quoted at the conclusion ‘Verily, I say unto thee, today thou shalt be with me in Paradise.’