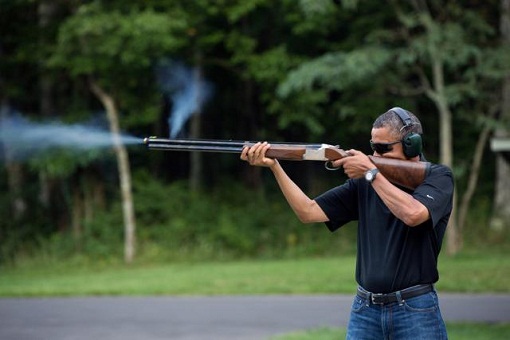 Rita weighs into the gun debate, and finds an unlikely hero in Piers Morgan…

Well, I’m going to bite the bullet and write about guns, a topic that leaves me feeling trapped in a Hall of Mirrors where everywhere you turn you see a distorted, nightmarish vision of America.  But this is a nightmare from which there is no waking; those terrifying visions are reality.  When twenty children were slaughtered with military weapons at their elementary school in December, Americans agreed to start a “conversation” about gun violence.  Note the use of the word conversation, which implies a decorous, civilized process, far from the ugly violence, rage, and inflamed passions that erupt into the national airwaves whenever the topic of gun control comes up.  This time, we were assured, it would be different; this time action would be taken.  But already the conversation is devolving into the same stale debate that has been going on for decades, while the body count climbs with every news broadcast.  Already the politicians who vowed to act in the immediate aftermath of the shocking event are backtracking and hedging.

Watching this debate as a non-American is extremely frustrating.  I was not born with the passionate attachment to guns that seems to be encoded in every last scrap of American DNA.  To me it seems very simple: America endures so many gun deaths because Americans have too many guns, in fact 50% of the guns in the whole world.  But the National Rifle Association (NRA) and the rest of the gun lobby insist that “it’s not about the guns,” that “guns don’t kill people, people kill people.”  The obvious common factor in all these incidents is not to blame, but any number of scapegoats including violent video games and lack of an effective mental health system.  The fact that other countries have their fair share of mentally ill people, angry people, and video game players but don’t suffer the same levels of gun violence, (perhaps because they don’t have so many guns?), is brushed aside as irrelevant.

The gun debate starts from a point with so many unquestioned assumptions that gun control advocates are already at a severe disadvantage.  They must promise to take no action that could infringe on the Second Amendment right to bear arms.  The relevance of this 1791 pronouncement to 21st century reality cannot be questioned.  The amendment arose from the ideas of the puritans in the English Civil War.  A “well regulated militia” (the wording in the amendment) was necessary to protect the people against the tyranny of the King.  You might as well include Oliver Cromwell in the company of scapegoats to blame for the current orgy of violence.  But it wasn’t until as recently as 2008 that the Supreme Court ruled the Second Amendment protects an individual’s right to bear arms, not just that of a militia.  There is simply no ground for reasoned debate about the Second Amendment.  As soon as there is any mention of gun regulation the gun lobby erupts into full hysterical mode.  The names Hitler and Stalin are thrown around with dire warnings that a tyrannical government is going to take away your guns.  After all, the first thing that the Nazis and the Communists did was disarm the people.  The fact that the United States is a stable democracy does nothing to assuage the fears of the fringe right who believe we already have a socialist tyrant in the White House.  The argument becomes an insane circle – we need our guns to defend ourselves against the government coming to take away our guns!

In this atmosphere of hyperbolic debate there are few media heroes, but one has emerged in the unlikely personage of my fellow Brit Piers Morgan.  I know Piers crossed the Atlantic trailing a cloud of mediocrity and more than a whiff of complicity in the Murdoch scandals.  Perhaps it is a measure of the state of the American media that he is now a paragon of journalistic integrity.  For several weeks he has used his nightly CNN program to take on the gun lobby, confront them with the tough questions, and expose their false assumptions.  One pro-gun guest, Alex Jones, broke down into a complete hysterical rant that went viral on YouTube.  In fact he personified just the kind of crazy nut you wouldn’t want to have a gun!  I suppose it is easy for Piers to look like an Edward R. Murrow in comparison to such a performance.  Jones started an online petition on the White House web site demanding that Piers be deported for his “anti-constitutional” views.  In what must be ruled an unwise move by the White House, they invited citizens to start petitions on any topic and if 25,000 signatures were obtained the White House would be obligated to give an answer.  Given the size of the U.S. population it is all too easy to find 25,000 people to sign on to any crackpot idea.  Recently the White House had to respond to a request to build a Death Star for interplanetary warfare.  They have since raised the number of signatures required on a petition to 100,000.  But England can breathe a sigh of relief.  Piers Morgan will not be sent home.  The White House reminded the petitioners that the First Amendment grants even Piers Morgan, a non-American, the right to free speech.

As we wander deeper into the Hall of Mirrors, desperately seeking an exit into a sane world, the rhetorical distortions become more bizarre.  I received an email from a former library colleague linking the gun issue with abortion.  Why all the fuss, he wondered, about just twenty children being shot to death when thousands are killed each year by abortion?  He went on to deliver the requisite “it’s not about the guns” argument, declaring that any suggestion that it is about the guns amounts to “politicizing” the issue.  In the face of such madness I am left with some lingering questions.  Why is the Second Amendment so much more important to Americans than other parts of the Constitution and Bill of Rights?  Why aren’t Americans demanding a proper health care system with as much passion as they demand the right to own military assault weapons?  Does the right to bear arms outweigh other people’s right to the pursuit of happiness?  And does the right to bear arms also confer the hardened hearts necessary to bear the consequences?