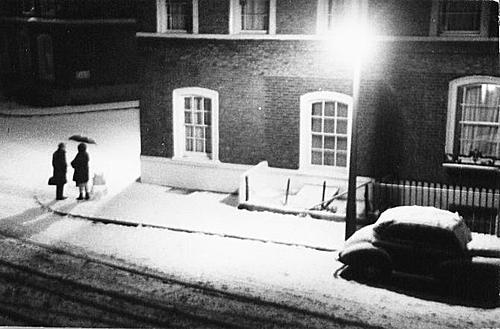 I can’t remember enjoying snow so much. It must have something to do with there being just enough for some fun but not enough to disrupt travel too seriously, at least here in London. The first proper fall we’ve had in a couple of years also lent some freshness and novelty.

Then there’s having two small boys who are discovering ‘the innocent joy of speed’, as Brit put it so nicely on Monday. Bombing down Parliament Hill on two-year-old but still pristine sledges was great and much-anticipated fun. Even though there was a crowd of people at the top, we had a clear run down what had become an icy flue with a cheeky little jump at the bottom. The trudge back up the slope was tiring for little legs but useful in ensuring a quiet afternoon back at home. Then Sunday morning saw snowman-building and snowball fights in the local square followed by a warming roast. The right kind of snow.

Anyway, feeling so well-disposed, I thought it would be good to choose a poem that showed some appreciation of the stuff. Thomas Hardy’s Snow in the Suburbs; is little known and untypical of his oeuvre, in its urban setting and also its cheerfulness – cheerful, that is, relative to his usual miserabilism: a black cat is of ‘feeble hope’, an entirely reasonable emotion to experience finding itself in the bleak Hardyan universe, but things turn out reasonably well for the creature.

Snow in the Suburbs

Every branch big with it,
Bent every twig with it;
Every fork like a white web-foot;
Every street and pavement mute:
Some flakes have lost their way, and grope back upward when
Meeting those meandering down they turn and descend again.
The palings are glued together like a wall,
And there is no waft of wind with the fleecy fall.
A sparrow enters the tree,
Whereon immediately
A snow-lump thrice his own slight size
Descends on him and showers his head and eye
And overturns him,
And near inurns him,
And lights on a nether twig, when its brush
Starts off a volley of other lodging lumps with a rush.
The steps are a blanched slope,
Up which, with feeble hope,
A black cat comes, wide-eyed and thin;
And we take him in.

“Every street and pavement mute” – a line that fits the picture at top, a photograph of our road muffled with snow. I gather it was taken shortly after the last World War, perhaps during the dreadful winter of 1947, when the snow was very much of the wrong sort.

Finally, here’s some bonus prose, one of my favourite pieces, the penultimate paragraph of Forest and Steppe from Turgenev’s Sketches from a Hunter’s Album. Not a stroll one could enjoy even on the higher reaches of a frozen Hampstead Heath, and ending in something very different from our current slushy thaw:

And on a wintry day to go walking through the high snow-drifts in search of hares, to breathe in the frosty, sharp-edged air, to crinkle one’s eyes unwillingly against the dazzling, finely speckled glitter of the soft snow, to wonder at the green hue of the sky above a reddening forest!. .. And then there are the first spring days, when all around everything gleams and crashes down, and the smell of the warmer earth begins to rise through the heavy steam of melting snow, and skylarks sing trustingly under the sun’s oblique rays on patches where the snow has thawed, and, with a gay noise, a gay roaring, the torrents go whirling from ravine to ravine…”

8 thoughts on “Every branch big with it”