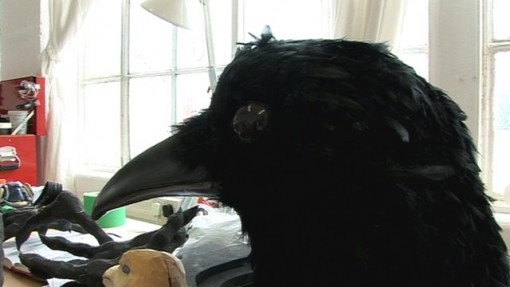 The crow was not among the creatures listed in Brit’s interim taxonomy of good and bad animals, but it it is safe to assume it is bad. Certainly the crow which wrote the text below, in Yorkshire in 1970, seems a pretty nasty piece of work. It may surprise some readers to learn that a crow is intelligent enough to keep a diary, but do not forget that they are among the cleverest of all birds. Clever, and deeply bad.

Woke up in a foul temper. I was really, really pissed off. Sat atop a tree and shouted my head off. I was still pissed off but I went down to the car park to meet my crow pals. We strutted about, intimidating smaller birds and indeed anybody else we came upon.

Later I went to sit atop a tree just outside Mytholmroyd in the West Riding of Yorkshire. Did a bit of cawing. Spotted a bloke with a notepad and pen, who seemed to be jotting down my caws. I wasn’t having that, so I swooped down and had a quick slash at his face with my talons.

“By ‘eck!” he cried, “’Appen you’ve drawn blood, crow! Just like the first time I kissed my poor wife Sylvia, dead by her own hand these seven years.”

Then he added “BULLORGA OMBOLOM FROR”, in Real Orghast. I didn’t realise darkness had opened its womb, but looking round I saw night was falling, so I headed for a different tree and shouted my head off for a while because I was still in a foul mood. Then I fell asleep.