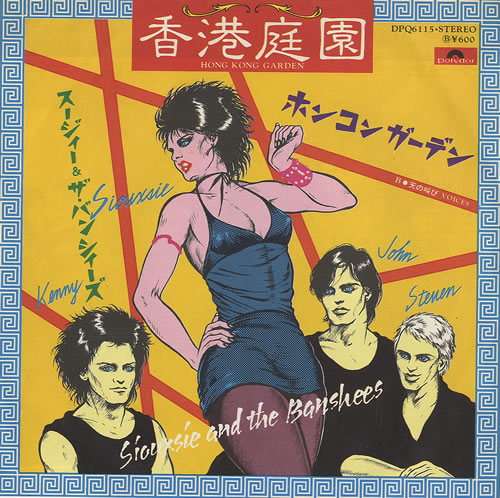 Not your usual warblers…

On a Friday night at 9pm BBC4 occasionally show some of the best documentaries on rock and pop music I’ve ever seen. Yes, they are indeed worth the license fee on their own. A couple of weeks ago they showed Queens of British Pop and it got me thinking.

Women sing differently to men, obviously. Higher, for one thing. But there are women who are not just different from men but also different from virtually everyone – no mushy, drippy ballads or straightforward rock and roll belters for them. Here is my choice of four that have made hobnailed impressions, at least on me.

I should admit that back in ’78 it was Blondie’s Debbie Harry that had me clutching my pillow tightly, so to speak. But looking back it’s Siouxsie and her Banshees that are memorable. Or, to be honest, scarily memorable. This twelve year old found her both fascinating and terrifying: a Barbed Doll.

Around about the same time another of my favourite things was the Saturday night Chinese takeaway treat, which in those days always featured phosphorescent, possibly radioactive, sweet-and-sour sauce accompanying deep-fried bullets of meat. It’s therefore unsurprising that this track strikes the chord. Incidentally, pop music that referred to things like your Saturday night takeaway made you feel at the heart of things, even if you did live in the middle of nowhere. It’s somehow impressive that this is a song lyric: “Chicken Chow Mein, Chop Suey / Hong Kong Garden takeaway”.

A Lazy Sunday Afternoon on this theme would not be close to complete without Kate Bush. I don’t have anything to add on all the good stuff that’s been written about her. Here she is covering Elton John’s Rocket Man, knocking it out of the park. I’ve only recently managed not to start crying when I hear this having listened to it numerous times whilst walking up and down a ward in a London hospital wondering when I’d ever get out. If you’ve been involuntarily away from your family for a spell the lyric become unbearably poignant.

I’m not sure there’s been a piece of pop music as beautiful as Fleetwood Mac’s Sara. Again, I can’t add anything to the masses written about Stevie Nicks and the Mac – it’s all quite legendary. Indeed, this is probably quite a hackneyed selection. But I make no apologies – if it introduces one person to this piece of transcendental gorgeousness it’s been worth including it. (Incidentally, YouTube saw fit to run ads for ‘Prepaid Funeral Plans’ when I was checking this video played ok – I hope this is more of a reflection of pop’s aging demographic than the morose and prudent nature of Fleetwood Mac fans).

Finally, back to something punchier: The Selecter, fronted by rude girl Pauline Black. You’ve got to love her style in this video. In fact, having gone on to act on stage and screen she could have made a great first female Felix Leiter (Felicia Leiter?).

10 thoughts on “The Quirkier Queens of Pop”