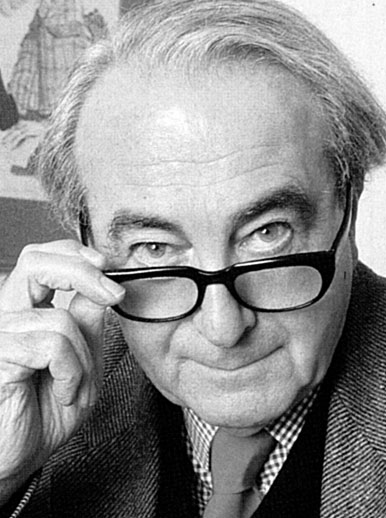 Michael (‘Peter Simple’) Wharton’s book The Missing Will is one of the finest, funniest memoirs you’ll ever read. In this exclusive article from Slightly Foxed magazine, Jeremy Lewis introduces one of the last of Fleet Street’s heroic drinkers…

I got to know Michael Wharton in the early 1980s, when I was work­ing as an editor at Chatto & Windus. We had commissioned him to write what turned out to be The Missing Will, the first volume of his autobiography, and every now and then I would meet him for a drink in the King and Keys, a narrow, smoke-filled pub next to the old Telegraph building in Fleet Street. It was usually half-empty when I went there during lunch breaks that continued well into the after­noon, but in the evenings, Michael told me, it was crammed to overflowing with his colleagues from the Daily Telegraph, red-faced and sweating and jostling for a place at the bar.

He enjoyed the fact that whereas journalists from ‘red-tops’ like the Sun or the News of the World hurried back to respectable semi­detacheds in Banstead or Epsom as soon as they decently could, the men from the Telegraph were drunk in the pub every night, and were quite likely to end the evening asleep on the floor or in bed with someone else’s wife. Booze and its consequences were to loom large in Michael’s two marvellous memoirs, in which comicality and an overwhelming sense of life’s absurdity are interlaced with melancholy and a sense of loss, jovial carousing with debilitating bouts of depres­sion and a complicated private life.

Michael had been writing his satirical ‘Way of the World’ column for the Telegraph since 1955, under the pseudonym of ‘Peter Simple’. A creature of habit, he worked out what he was going to say on top of the various buses that took him to the office from his flat in Prince of Wales Drive, Battersea, wrote it all up on arrival, and – his labours done – made his way to the King and Keys on the dot of half-past two for a lunch consisting, without fail, of a corned-beef sandwich washed down with a double brandy and ginger ale, soon followed by a second. A small, neat figure in a brown tweed overcoat, he posi­tioned himself exactly halfway down the bar, shot quick, quizzical glances at his companions out of bright, almond-shaped eyes, and spoke in a low mutter, addressing his remarks to the floorboards.

Like all the funniest men I know, he laughed at his own jokes, and liked to repeat the same stories or observations, always to good effect: he would urge one to read the wartime diaries of the great German writer Ernst Jünger, for example, or point to a corner of the bar reserved for one of the pub’s best-known customers, a sub-editor on the Telegraph who was the mildest of men by day but who became a demon by night, picking fights with fellow-drinkers, bawling at the barmaid and dashing glasses to the ground before being shown to the door. Michael’s fellow-lunchers included admirers like Richard West and Roy Kerridge, both of whom had urged me to get in touch with him. I liked him at once, sharing his dislike for things mechan­ical – he never learned to drive, and was outraged by the introduction of computers into the newspaper world – and his admiration for Patrick Leigh Fermor and the great Indian sage Nirad C. Chaudhuri. When, in due course, The Missing Will was delivered to Chatto, we found it so funny and so compelling that we promptly commissioned its successor to find out what happened next.

The Missing Will is an account of Michael’s chequered career from his birth in 1913 to the moment when he was offered a job on the Daily Telegraph. Michael Nathan was born and grew up in the West Riding of Yorkshire, on the outskirts of Bradford. His father, of German and partly Jewish ancestry, was in the wool trade: he spoke four languages, all with a Yorkshire accent, was a compulsive gam­bler, liked to bark out the same words or phrases with mantra-like regularity, and indulged in titanic farting competitions with Michael’s older brother. His mother, née Wharton, was a lower­middle-class Yorkshire girl who could barely read or write: after the family had moved, briefly, to Harrogate, she became convinced that she was related to the Wharton family of Wharton Hall in Westmorland, and spoke in excited terms of the ‘Wharton Inheritance’ and a mysterious ‘missing will’, destined to restore the family fortunes. Bradford itself seemed a magical town to the young Michael, and years later it inspired one of Peter Simple’s best-known columnar creations, the ‘25-stone, crag-featured, iron watch-chained Alderman Foodbotham’, Chairman of the Bradford City Tramways and Fine Arts Committee. ‘Born to function, as it were, on one cylinder only’, the young Michael Nathan was a torpid, melancholic, precocious child, inter­ested in words and language above all else despite being so silent that he was known in the family as ‘Moltke’, after the famously taciturn Prussian general. When his father’s business suffered a downturn, Michael had to abandon dreams of Winchester and settled instead for Bradford Grammar School, where he grew a moustache before becoming ‘the only bearded schoolboy in the West Riding, perhaps in the British Isles’.

From there he went on to Lincoln College, Oxford, where ‘I learned very little . . . except to drink, to be idle, and how to live, with some help from like-minded companions, “in a world of my own”.’ His friend Denis Hills, later to be condemned to death for describing Idi Amin as a ‘village tyrant’ before being rescued by Jim Callaghan, remembered him as ‘a frail and faunlike’ figure, who was eventually sent down for hurling a Scotch egg at the dons on High Table, for ‘the mass destruction of crockery’, and for dismantling a Victorian sofa and throwing the pieces into the quad.

A ‘state-registered melancholiac’, passive, shy and lacking in self-confidence, Michael embarked on a life of amiable drifting after leaving Oxford. He wrote a surrealist novel, published years later by Anthony Blond, contributed a short story to the first issue of Cyril Connolly’s Horizon, and hovered on the Celtic fringe, teaching him­self Welsh and displaying a soft spot for de Valera’s dream of a rural, backward-looking Ireland, peopled by devout, Gaelic-speaking peas­ants strumming harps. A passionate upholder of the status quo, Michael instinctively sided with those who were threatened by the forces of progress, modernity, high-mindedness and industrializa­tion: Mussolini’s invasion of Abyssinia prompted ‘for the first and only time’ some ‘twinges of liberal feeling’, since the remote African kingdom was the kind of anachronism that was doomed in the mod­ern world. ‘A person of melancholy, retiring nature, I most admired those who were exactly the opposite – outgoing, sanguine, confi­dent,’ Michael tells us. ‘Lacking in self-esteem, I admired those who stood up for themselves, particularly against the odds (the White Rhodesians and South Africans were to prove good examples later on). Above all, I would choose the losing side.’

After Munich, Michael moved with his first wife and their child to a cottage in Westmorland, not far from the ruins of Wharton Hall: there he lived an idyllic, indolent life, drinking a great deal, writing pieces for Punch, changing his surname to Wharton, and wondering whether Hitler was not, in fact, a Welshman. He volunteered as soon as war broke out and enjoyed a life of ‘organised, dutiful absurdity’ in the Royal Artillery.

When Hitler invaded the Soviet Union he was, he admits, German enough – and anti-Communist enough – to feel a surge of excite­ment. Like so many Englishmen, he was still unaware of the full horrors of Nazism: quite apart from having a superior line in uni­forms, the Germans had ‘a suggestion of romantic evil which had a certain sinister attraction for people like myself . . . to have been a German tank commander on that first morning, waiting on the fra­grant turf, with the larks singing, for the order to advance into the blue distances of Russia, would have been to experience true military glory, perhaps for the last time in the history of the world’. Far removed from the Eastern Front, he spent the second half of the war as a soldier in India and, much to his amazement, reached the rank of lieutenant-colonel.

The war over, he reverted to the drunken, feckless life of an impe­cunious would-be writer. He and his first wife went their separate ways, and for several years he was never quite sure whose bed he would end up in after an evening of heavy drinking. He worked for the BBC, writing pieces on the Luddites and a ‘Focus on Waste Paper’, and caroused in the pubs round Broadcasting House with Louis MacNeice, Dylan Thomas, the barrel-shaped John Davenport, René Cutforth and other denizens of post-war bohemia. He edited the Football Association Yearbook, to which he contributed a definitive essay on ‘Some Aspects of the Offside Rule’, and wrote histories of various football clubs, including Accrington Stanley and Luton Town (‘the Hatters’): he provides a memorable vignette of Sir Stanley Rous, the President of the Football Association, who was so enraged by the College of Arms’ refusal to approve a coat of arms he had designed for the English team that ‘he flung a heavy presentation inkwell at a subordinate and shut himself up in his personal music-room to play thunderous chords on the organ he had installed there until his nerves were calm enough for him to enter the human world again’. And he struck up a close, bibulous friendship with the Irish-American writer Constantine FitzGibbon and his wife Theodora.

The FitzGibbons were given to volcanic rows, and Michael noted that whereas working-class couples hurling crockery at one another invariably hit the mark, the FitzGibbons always missed their targets. On one memorable occasion, however, Constantine hit Theodora a glancing blow with a heavy German dictionary before pushing her into the fire, but ‘she came back strongly with a wine bottle and later they administered first-aid to each other for the cuts and burns they had sustained’. The FitzGibbons were present when Michael’s friend Colin Welch asked him to join him on the ‘Way of the World’ col­umn. ‘Can’t you see, you fathead? He’s offering you a job,’ Theodora shouted when Michael looked more dazed than delighted.

The second volume of Michael’s autobiography, A Dubious Codicil, is devoted to his time in Fleet Street, and to the crippling fits of melancholy which interrupted a life given over to writing and to ‘drinking and talking nonsense in a low-grade pub’. Read separately or together, The Missing Will and A Dubious Codicil are among the finest memoirs of the past half century, as sad and as funny and as beautifully written as James Lees-Milne’s Another Self or John Gale’s Clean Young Englishman. Michael died in 2006 at the age of 92. I last saw him with his third wife, Susan, at their home in the Chilterns, but I like to remember him halfway along the bar in the King and Keys, double brandy and ginger ale clutched firmly in one hand, his gaze on the floorboards beneath us.

This article first appeared in Slightly Foxed Issue 23, Autumn 2009. A publisher turned author, Jeremy Lewis has written three volumes of auto­biography, and biographies of Cyril Connolly, Tobias Smollett and Allen Lane. His most recent book is Shades of Greene: One Generation of an English Family (2010). He is now researching a biography of David Astor of the Observer.

Michael Wharton’s The Missing Will (1984) is available from Slightly Foxed in a limited and numbered cloth-bound pocket edition of 2,000 copies. Visit www.foxedquarterly.com for details.