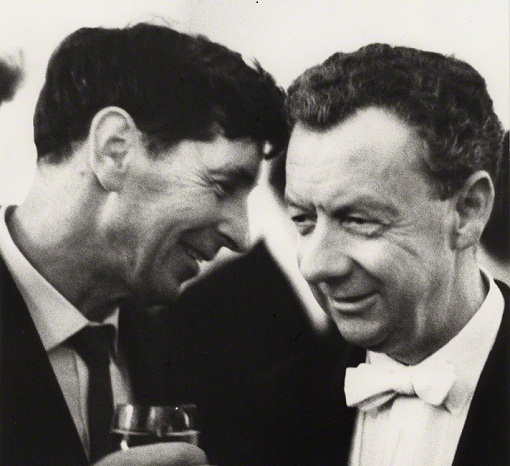 A disproportionate number of composers have been homosexual, and in an age when it was necessary to hide the fact. This week Mahlerman looks at how repressed or forbidden love might have found expression in great music…

If I were to try and make out a case for homosexual composers producing a ‘gay sound’ it would be time, I think, to ring for the men in white coats. What is interesting to note is the wide proliferation of gay men throughout the world, and particularly in America, who make careers in music as creative or re-creative musicians. And thinking about it further, could it not be asserted that if you were so inclined, and living through the first half of the last century (or earlier), you could reasonably claim to have been pushed to the margins of society and become a pariah or, at the very least, an outsider? And if you accept this as fact, it would not be too much of a stretch to imagine that any repressed feelings you might harbour, any emotional turmoil, could find expression in a musical composition particularly, say, in an opera. Immediately springing to mind is the isolation of Britten’s Grimes in Peter Grimes, and of Aschenbach in Death in Venice. Sex is there, in the shadows, but loneliness and solitude dominate.

When the composer Marc Blitzstein was beaten to death on holiday in Martinique in 1964 America lost a creative force that his friend (and lover) Leonard Bernstein described as ‘irreplaceable’. Although married, he was a predatory homosexual, and had picked up a trio of sailors, drunkenly propositioning one of them. I came across his opera Regina many years ago in a CD box dumped into a remainder bin at HMV and selling for a couple of pounds. It is a free adaptation of Lillian Hellman’s play The Little Foxes, and straddles both the operatic world and that of the popular musical – and, like Gershwin’s Porgy and Bess and Kern’s Showboat, is set in the Deep South of America. Unlikely ever to eclipse either of those masterworks it nevertheless has a pungent charm that offers no hint of its creator’s troubled life, and grim death.

Jean-Baptiste Lully was a very naughty boy who died, as we know from an earlier Lazy Sunday post, by spearing a toe with his conducting-rod and contracting gangrene. Italian-born, he spent most of his life in and out of favour at the court of Louis XIV, composing first a series of comedies-ballets, and later, with librettist Philippe Quinault, establishing an entirely new type of French opera, tragedie lyrique. For most of his life with both genders, he acted without moral restraint and, although he married the daughter of a friend and sired ten children, his life as a debaucher and debauchee continued unchecked. His music offers no clues to his reckless behaviour, being altogether clear, noble, and full of the spirit of grand siecle, never more so than here, in the opening scene and Prologue from his opera of 1677, Isis.

In my last Sunday of sloth Some Autodidacts, I mentioned that Francis Poulenc was the first modern composer to ‘come out’, and so he was. I return to him today not to labour the facts of his sexual orientation, but to celebrate his unique, albeit minor contribution to elegance and sophistication, suavity and irony in music. Here, a reminder of Poulenc’s great love of Mozart in this wonderful vid of the composer and his great friend Jacques Fevrier playing the Double Piano Concerto with perhaps the most elegant conductor to draw breath, George Pretre, happily still with us. Listen for the gamelan effects near the end, mixed with garlic and Wolfgang Amadeus – delicious!

Benjamin Britten and Michael Tippett had much in common. They were both pacifist and, as war loomed, conscientious objectors; they were both leftist and both gay, Britten a rapacious seeker of boys, Tippett a more contained figure, more physically attractive, and with an appeal (which he did not resist) to women as well as men. And although they both revered Henry Purcell, their compositions could not have been more different – Britten precise and classical, with everything in its place, not a note too many, nothing left to chance; Tippett all over the place, and often declared ‘unplayable’. His most important male relationship was perhaps with the painter Wilfred Franks. ‘Meeting with Wilf was the deepest, the most shattering experience of falling in love…….all that love flowed out in the slow movement of my first quartet’. Here is the Lento Cantabile second movement from the Quartet No 1.

5 thoughts on “Music from the Closet”