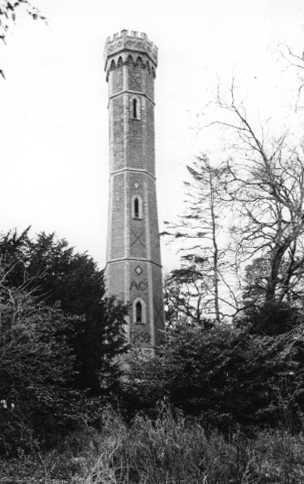 The country’s leading folly-hunter takes us to the most terrifying tower in Britain, at which his love for pointless buildings nearly terminated…

Essex has a number of folly towers of a more traditional sort: all are eclipsed by Bull’s Tower in Pentlow, a rather attractive, unostentatious Victorian brick tower in a former rectory garden.

It is the most terrifying tower in Britain.

When first we called in the early 1970s we tugged on the old bell pull and far away in the depths of the house a rusty bell finally tolled. No one answered. We waited. When we stepped back every window of the house had one white cat looking out at us. Nervously we made our way across the waist-deep lawn to the tower. It is 70 feet high, banded with diapered cross and diamond bricking with the date—1859—prominently set above the door. Above that is a narrow window, and then further up are the initials ‘AC’i’, also picked out in dark blue brick. This stands for Anno Christi, rather than the more usual Anno Domini. A plaque records that

THIS TOWER WAS ERECTED BY THE REV. EDWARD BULL, M.A. IN MEMORY OF HIS PARENTS ON A SPOT THEY LOVED SO WELL

It is also the most frightening building we have ever been half way up. When we entered the tower I gentlemanly ushered my girlfriend up first. The staircase might have been rotten. As I mounted each step, so did the trepidation. A nameless fear iced into me, and the foul thing was that I was aware that the fear was groundless. It was half-past three on a sunny June afternoon, a glorious English summer’s day, but it felt as comfortable as Newport docks at midnight in February. I resolved that my interest in follies terminated here, and as I turned to go I was slammed against the wall by a rushing mighty wind. It was my girlfriend, leaping down the stairs four at a time. She was in the car before I reached the door.

It was long after we had got away from the tower, tyres squealing, overcome by inexplicable terror, that we sat down to try and rationalise the fear. A little research made it all the worse.

We discovered that the Rev. Bull left Pentlow to become rector at another village four miles away and built himself a new rectory there in 1865; his Borley Rectory, which burnt down inexplicably in 1941, only took a few years to establish its fame as the most haunted house in England. Old photographs of Borley show it to be remarkably similar in style to the rectory at Pentlow.

No other tower in the county compares with it as a folly. Nothing in Essex equals Pentlow for atmosphere. We didn’t go back for 25 years.

We finally screwed our courage to the sticking-place and returned, full of trepidation, in 1998. The place was transformed — no cats, signs of life in the house, so we knocked, still a little gingerly. “Oh God,” snapped the exasperated new owner, “if everyone who said they were writing a book on follies actually got them published there’d be nothing else on the shelves. You can’t see it, it’s derelict.” And indeed it was.

These days it’s looking a little tidier. I still wouldn’t dream of climbing it. Even if my then girlfriend — now my wife — offered to go first.