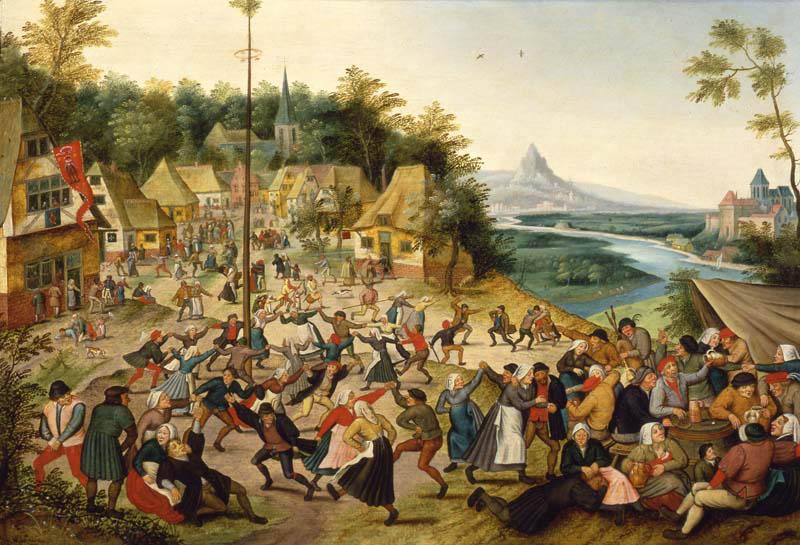 Fiery sacrifices, outdoor sex and morris dancing at dawn – Professor Nick Groom guides us through the cultural history of May Eve and May Day…

Restless and mischievous and downright evil spirits are particularly active at turning points of the year. So like Hallowe’en (31 October), the thirtieth of April is a night for supernatural encounters, devilry, and beastly ritual: fairies went about, witches were in the air, and goats held sabbaths until the Queen of May appeared at midnight to finally banish winter.

The first of May is Beltane, the pagan festival celebrating summer, so named for the ‘lucky fire’. Beltane fires were traditionally lit in the Central Scottish Highlands on 1 May in rituals that carried threats of human sacrifice. In one parish, it was recorded in the eighteenth century, a fire was lit and a cake baked and divided into pieces, one of which was daubed with charcoal. The villagers were blindfolded and each picked a piece:

Whoever draws the black bit is the devoted person who is to be sacrificed to Baal, whose favour they mean to implore, in rendering the year productive of the sustenance of man and beast.

Fortunately, victims were no longer sacrificed by this time and only compelled to leap three times through the flames. In Ireland since at least the tenth century cattle were driven between the bonfires or through the embers on May Day, supposedly to purify them. In Wales too it was recorded that ‘the bonfires lighted in May or Midsummer protected the lands from sorcery so that good crops would follow’. They needed protection: as late as 1794 on Old May Eve in Banffshire (Scotland) witches were still being reported to be riding through the air on broomsticks, dancing on water, and stealing milk from cows. The Revd Francis Kilvert was also aware of the tradition in the nineteenth century noting in his diary for 1870 with droll awareness:

This evening being May Eve I ought to have put some birch and wittan (mountain ash) over the door to keep out the ‘old witch’. But I was too lazy to go out and get it. Let us hope the old witch will not come in during the night. The young witches are welcome.

Echoes of these ancient British superstitions remain in the unluckiness associated with the spring and early summer and in the threat of supernatural powers, and so there is much protective magic invoked at this time of the year, particularly in the English tradition. Hobby horses were one defence: they make frequent appearances in folklore, plays, verse, and in Morris dancing, and there are two surviving (and thriving) hobby horse festivals remaining in England – the Minehead Hobby Horse (first recorded in 1792) and the Padstow ’Obby ’Oss (1803, although the tradition is undoubtedly older), and others are being revived later in the year, such as at Banbury in Oxfordshire.  Both the Padstow and Minehead beasts appear briefly on May Eve, before going abroad on May Day – two in Padstow, two or three horses in Minehead. Both are accompanied by musicians repeatedly playing traditional tunes, and by various attendants: they are large, swift, and uncanny creatures, from another, perilous realm.

Garlanding streets and homes with fresh greenery, often hawthorn or ‘may blossom’, was another form of protection. Only two months since Christmas greenery should have been taken down on Candlemas Eve (1 February), foliage was again brought into the home to ensure that human and natural worlds would exist in harmony throughout the year. This custom – called ‘maying’ – also became synonymous with Englishness: in 1515, for example, Henry VIII went a-maying with Catherine of Aragon to Shooter’s Hill, Greenwich, where they met with one ‘Robyn Hood’ and his company. These merrie men provided an archery display for the King and Queen, accompanying lords and ladies of the court, and a crowd of about 25,000, before a banquet was served in the woods. Maying, Robin Hood, Henry VIII, and a picnic under the trees: it was a thoroughly English day out. Others however were less impressed: Bishop Latimer was especially peeved on 1 May 1549 when he learned that his congregation were too busy celebrating Robin Hood out among the trees to attend his sermon.

The foliage selected for maying varied from place to place depending on local habitat and regional variations in the weather. Garlands made of hoops of rowan and marsh-marigold are recorded – rowan being of particular protection against the dark arts – but hawthorn blossom (the ‘may’ itself) was the most popular; it too had associations of protection. Fairies themselves could be calmed by hanging ribbons from hawthorn, and it was wise to hang hawthorn around a cradle to discourage the fairies from substituting one’s new baby with a changeling. However, care needed to be exercised in gathering the blossom: hawthorn growing in threes with oak and ash could open portals into the realm of Faerie – Thomas of Ercildoune (Thomas the Rhymer) met the Queen of Faerie under a hawthorn bush one May Day.

Bringing in the may survived the Reformation and it developed into the Elizabethan custom of attaching nosegays to horses and oxen. By the nineteenth century, this form garlanding became an annual feature of the equine culture, culminating in the foundation of the London Cart Horse Parade Society in 1886. There were other urban May Day celebrations as well. From the seventeenth century, for instance, May Day was the traditional celebration for milkmaids who promenaded with pails and later large headdresses made from silver plate, tankards, and teapots. These milkmaids shared the day with chimney sweeps, who were also decked out in ribbons and gilt paper. The figure of Jack-in-the-Green emerged from these festivities: originally a part played by a young sweep in milkmaids’ garland dances, Jack-in-the-Green soon developed into an urban custom of its own to raise money for young sweeps. The poet Robert Southey reported the phenomenon in 1820: ‘he is in the middle of a green bush, which covers him all over, head and all, … ornamented with ribbons’.

Morris dancing was a widespread seasonal spectacle, as noted by Shakespeare in All’s Well That Ends Well (1602-3): ‘A pancake for Shrove Tuesday, a morris for May Day’, and even today there are Morris dancers at dawn on May Hill (Gloucestershire), Nine Maidens (north Dartmoor), and Haytor (east Dartmoor) to welcome – or conjure – in the summer.

Unsurprisingly, morris dancing, like bringing in the may, was roundly condemned by Puritans. Most notorious was the extremist Philip Stubbes, who in The Anatomie of Abuses (1583) rails apoplectically and in copious prose at every imaginable and imagined vice (and in doing so providing a wealth of historical detail that would otherwise have been lost!). The morris dancers he condemns are arrayed in ‘liveries of green, yellow, or some other light wanton colour’, bedecked with ‘scarfs, ribbons and laces’ and ‘hanged all over with gold rings, precious stones, and other jewels’. Not content with such godless extravagance they then ‘tie about either leg twenty or forty bells, with rich handkerchiefs in their hands’ before cavorting with hobby horses and dragons to the noise of ‘bawdy pipers, and thundering drummers’, dancing with ‘their bells jingling, their handkerchiefs fluttering about their heads like mad men, their hobby horses and other monsters skirmishing amongst the throng’.

All of this was bound to inflame the passions, and so May Day has a reputation for seasonal lovemaking:

Hooray, hooray the first of May:
Outdoor sex begins today,

and the maypole was inevitably seen by some to be a ‘stinking Idol’ of wantonness. The earliest maypole dances are first recorded in the fourteenth century and by the sixteenth century communal dances of weaving, turning, and perhaps kissing (ribbon dances came much later). In 1644, maypoles were banned. Many had already been taken down in the preceding century, but it is highly unlikely that these harmless festivities were the centre of pagan sex cults. The English maypole, covered in ribbons and foliage, is, for one thing, more like a tree than anything else, but fetching foliage necessarily takes place outside the usual environs of the community on common or waste land and is consequently symbolically free from the constraints of normal moral behaviour, and so it clearly did develop into a sort of rural carnival with games and songs and dancing as a way of marking a special day. 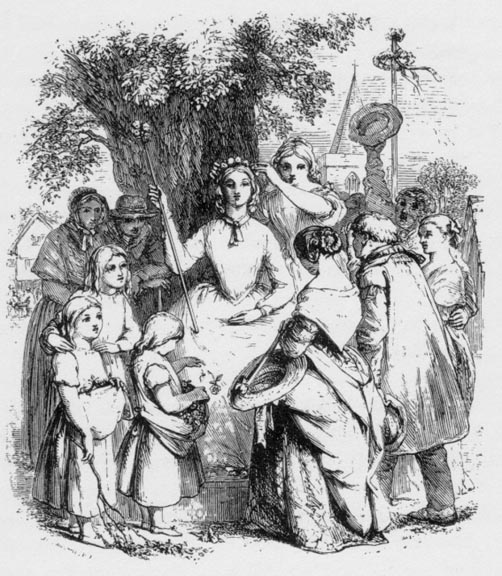 In the nineteenth century there were earnest endeavours to recreate earlier May Day festivities, and the event became a children’s festival with garlands and singing and dancing around the maypole. The May Queen too was a nineteenth century invention, inspired by writers such as Washington Irving, Leigh Hunt, Alfred, Lord Tennyson, and John Ruskin. But there are darker notes here. As Tennyson noticed, there were elements of sacrifice at the heart of the myth of the year’s rebirth, and in his poem ‘The May Queen’ the young girl who is crowned Queen of the May receives the honour as a death sentence: ‘I shall never see / The blossom on the blackthorn, the leaf upon the tree’. Dancing around the maypole ensures her death less than a year later:

We have come full circle, back to the menace of May Eve.

May Day traditions can remind us of the cultural heritage we are in danger of losing. Perhaps by celebrating May Day in its numerous local ways, we can help to write identity, heritage, and history back into our communities and back into the land. The diversity of May Day celebrations is resistant to the uniformity and commercialization that characterizes so much of our society, and which now monopolizes annual events such as Christmas and, more recently, St Valentine’s Day. So let us celebrate May Day as a festival independent of the forces of standardization and profit: sing your own songs, dance your own dances, bring something special to you – blossom, guests, joy – into your home, and banish the evil spirits.