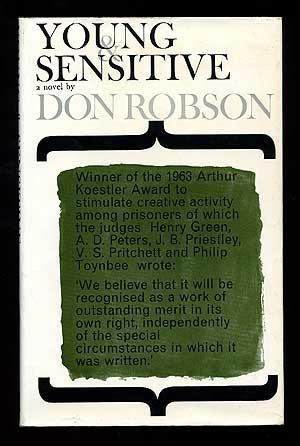 Those of you who have yet to purchase a subscription to the excellent magazine Slightly Foxed(the real reader’s quarterly) should do so now, because the current edition features The Dabbler’s editor Brit writing racily about Flashman. Buy it now!

In the meantime, here’s an excerpt from the very first edition of Slightly Foxed, in which film-maker Anthony Perry uncovers a remarkable tale of plagiarism…

In 1963 a convict serving a four-year sentence in Dartmoor for car theft thought he would write a novel. He called his book Young and Sensitive and described it as ‘a tender novel of awakening love as seen through the eyes of a 16-year-old boy, when he discovers his first affair is a thing of vibrant beauty’.

The Governor was greatly impressed when shown the book and immediately put it forward to the judges of the Arthur Koestler Literary Prize, which had just been established to encourage prisoners towards creative activity.

The convict, Don Robson, had indeed been creative. Finding writing difficult, he had thought to crib the entire contents of an American paperback he had found in the prison library and present it as his own work. In due course it came before the distinguished panel of judges: J. B. Priestley, Henry Green, V. S. Pritchett, Philip Toynbee and the literary agent A. D. Peters, who hailed a raw but distinctly promising talent.

I was a small but energetic film producer at the time and optioned the film rights, Clive Exton wrote an excellent script, Karel Reisz and Oscar Lewenstein, who were directors of British Lion, backed the project, and finance and distribution were agreed.

Unfortunately, however, when Hutchinson published the book and rapidly sold 3,000 copies, a reader of Young and Sensitive realized its almost page-for-page similarity to the American paperback Robson had plagiarized. It was identified as Fires of Youth by an unknown writer called Charles Williams, and published by an outfit called Magnet Books which had long since gone bankrupt and disappeared without trace.

Consternation. But it was true. Simple plagiarism.

Robson, released on licence after the award, had married and was working in a garage in Wigan. He repaid the £25 prize money to the Koestler Trust, and his wife sent me a postal order for £10 with the declared intention of repaying the full option money in due course. I didn’t expect her to send any more and nor did she.

There was a certain gleefulness in the popular press at the embarrassment of the critics, and fun for the headline writers – ‘ Dartmoor Crib Cracked’ etc – but Robson’s achievement was a real one, if not the one he was rewarded for. To sit down and painstakingly anglicize a foreign book and copy it all out in longhand called for application and some real talent. It was a pity we didn’t all make an effort to befriend him and encourage him to better things.

It was a good book and I share Irving Wardle’s summing-up in the Observer:

I don’t see why the discovery of plagiary should be taken to prove Young and Sensitive a bad book. It certainly wouldn’t have received so much attention without the help of the Koestler Award, but shorn of its curiosity value it still survives as one of the best novels about adolescence to have appeared in the last few years. Not an elegant book, but an unfakeably honest record of emotional growth.

But the last word should go to a prison officer at the time: ‘I reckon they ought to give Robson a Duke of Edinburgh Award for initiative.’

To any student of such matters I have a copy of the book and Clive Exton’s script. anthony@evelynwilliams.com