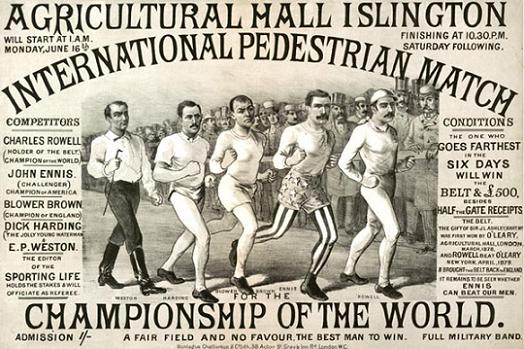 Back in 1773, at about this time of year, one Foster Powell (below) had just completed an epic walk, from London to York and back (396 miles) in less than six days, that won him a hefty bet and made him a celebrity. I’ve long been vaguely fascinated by these feats of ‘pedestrianism’, but hadn’t realised quite how extreme they were – or, still more surprisingly, that they are still being surpassed in the 21st century. 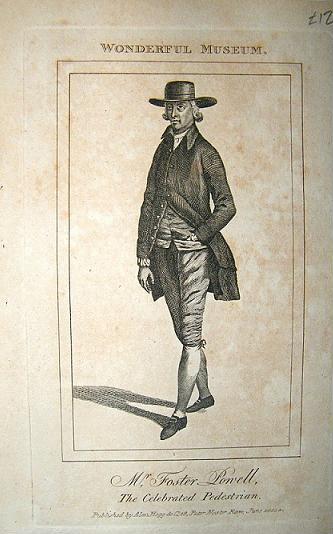 Foster Powell’s great walk was soon bettered, and, in the 19th century, the six-day walk became a fiercely competitive, big money, big crowd (a staggering 70,000 for one event!) indoor sport, largely because of the prodigious feats (500 miles in 6 days? No problem) of an American pedestrian called Edward Payson Weston. By the time the 500-mile mark was reached, the six-day walk was open to all comers – runners or walkers. The distances covered in six days became ever more mind-boggling, Weston reaching 550 miles and the Englishman Charles Rowell managing 530. [In the picture at the top of this post, Weston is on the far left, with a riding, or perhaps walking crop; and Rowell is on the far right – Ed]

Then in 1882 another Englishman, George Hazel, hit the altogether unbelievable 600-mile mark – but even that record didn’t stand long, with yet another Englishman, competing in America, clocking up 623 miles in 1888 – by which time interest in the six-day event was waning.

So that was that? No, far from it – there was a revival of interest in this form of ‘ultrarunning’ in the 1980s, and new six-day records were set in 1984 – 635 miles – and, finally and surely unbeatably, 644 miles, run indoors by a Greek runner, Yiannis Kouros (nicknamed ‘Pheidippides’ successor’ – below) as recently as 2005. 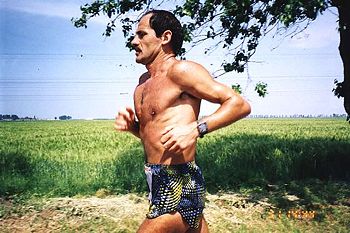 Why do we never hear of these astonishing feats – equivalent to running four consecutive marathons a day for six consecutive days? Oh of course – there’s no money in it, and it’s too boring to attract spectators or TV cameras. This makes these lonely endeavours at the extremes of human endurance all the more noble – or mad, or both… There’s a potted history of the six-day race here. Read and boggle.