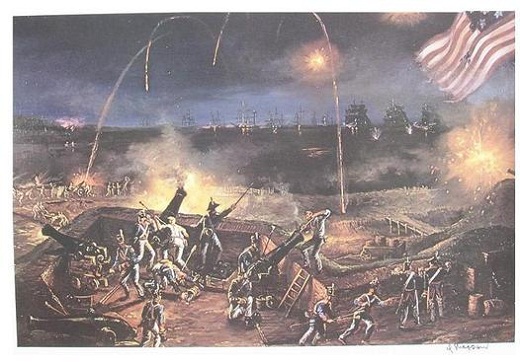 How did the USA end up with a National Anthem that’s almost impossible to sing in tune? Rita investigates…

It is tortured to death every weekend in sports stadiums across the nation – the notoriously hard to sing National Anthem of the United States, “The Star-Spangled Banner.” A Mount Everest of song, with soaring peaks, treacherous chasms, and a rubble-strewn scree of verse lying in wait to trip unwary tongues. As singers claw their way up the high notes they succumb to oxygen deprivation and freezing in mid-note, leaving the hardy instrumentalists pressing on to the summit without them. Amateur and professional singers alike fall victim to the Curse of the Anthem, their shame preserved forever in YouTube videos. The song itself ends up tattered, torn, and mangled beyond recognition, a far cry from the proudly waving flag it celebrates.

You have to wonder who came up with the idea of choosing this for the National Anthem when there are plenty of other easy to sing options like the melodious “America the Beautiful.” Well it turns out it was another inexplicable decision churned out by Congress, this one in 1931. What were they thinking? A tongue-twisting verse by a minor poet celebrating a long forgotten war with Britain and, most puzzling of all, set to the tune of an English drinking song! Perhaps the 18th century gentlemen of the Anacreontic Society had imbibed enough of the hard stuff to sing it flawlessly, but their American cousins haven’t mastered the song in close to 200 years of sober practice.

The poet was lawyer Francis Scott Key and the war was The War of 1812, the last time the British took up arms against their former colonial subjects. The whole thing started with naval clashes off America’s eastern seaboard. The British insisted on the right to board American ships and capture any British citizens serving on their crews. In the ongoing conflict with Napoleon they couldn’t afford to lose British sailors to the better pay and conditions offered by the American navy. Emotions still raw from the Revolutionary War, tempers flared and cannons were fired. As would be the case in wars to come, America was divided between hawks and doves. Francis Scott Key started out a dove. Again in a pattern that would become familiar, the hawks were keen to use the naval skirmish pretext for their real goal – the annexation of Canada. The War of 1812 is barely mentioned in American schools, where students are kept busy with fairy tales like the one about George Washington and a cherry tree, so few Americans realize that they once invaded Canada. In fact American forces got as far as York, later renamed Toronto, burning government buildings to the ground.

It was in retaliation for this indignity that in 1814 British forces detoured from their advance on the port of Baltimore to attack a swamp of no strategic importance, the capital city of Washington. They advanced so quickly that President Madison and his wife barely made it out of town. Dolley Madison is said to have fled in a carriage taking the Gilbert Stuart portrait of George Washington with her. British forces entered the White House to find the dining table set and a confused kitchen staff wondering what to do with all the prepared food. So the British officers sat down to an excellent dinner before ordering their underlings to set the place ablaze. After also torching the Capitol building they pressed on up the Chesapeake to Baltimore.

This is where Francis Scott Key accidentally became a witness to the assault on Baltimore’s Fort McHenry that inspired his stirring patriotic poem. By now a hawk, he changed his mind about the war when the first British boot touched American soil, he was sent to negotiate the release of an American being held prisoner on a British ship in the Chesapeake. The captain decided to detain Key himself till after the attack in case he had gleaned useful information about British strategy while on board. From this vantage point Key and his fellow prisoner had a perfect view of the dawn-to-dawn bombardment. One story claims that the opening words of the poem, “Oh say can you see,” were literally spoken to his companion, an aging physician with poor eyesight. In any event this is the first verse Key scribbled on the back of an envelope:

Oh, say, can you see, by the dawn’s early light,
What so proudly we hailed at the twilight’s last gleaming?
Whose broad stripes and bright stars, through the perilous fight,
O’er the ramparts we watched, were so gallantly streaming?
And the rockets’ red glare, the bombs bursting in air,
Gave proof through the night that our flag was still there.
O say, does that star-spangled banner yet wave
O’er the land of the free and the home of the brave?

Ironically, in “the land of the free” at least one slave had participated in sewing the star-spangled banner celebrated here with such fervor.

The British failure at Fort McHenry spoilt their appetite for the American war; after all they still had their hands full with Napoleon. So the War of 1812 fizzled out with the signing of the Treaty of Ghent on December 24th 1814. The British went on to defeat Napoleon just 38 miles away at Waterloo in the following June, and the Americans promptly forgot all about the existence of Canada for the next 200 years.

The words of the first verse of the poem that would become the National Anthem are so difficult for singers to memorize and untangle under the stress of aiming for the high notes, that the other verses are very rarely attempted. If anything, they get more difficult to decipher. I’m particularly fond of these thorny lines, though I could never attempt to sing them:

And where is that band who so vauntingly swore
That the havoc of war and the battle’s confusion
A home and a country should leave us no more?
Their blood has wiped out their foul footstep’s pollution.
No refuge could save the hireling and slave
From the terror of flight, or the gloom of the grave.

But was the original 18th century drinking song any easier to sing? I’ll leave it to the reader to judge. This is the first verse of “To Anacreon in Heaven” as sung at the Crown and Anchor Tavern in the Strand:

To Anacreon in Heaven, where he sat in full glee,
A few Sons of Harmony sent a Petition,
That He their Inspirer and Patron would be;
When this Answer arrived from the Jolly Old Grecian:

“Voice, Fiddle, and Flute, No longer be mute,
I’ll lend you my Name and inspire you to boot,
And, besides, I’ll instruct you like me, to intwine
The Myrtle of Venus with Bacchus’s Vine.”

Perhaps everyone should have just stuck with “God Save the King.” Then singers and sports fans across America would be safe from shame and torment on the weekends. If you have the stomach for it, go ahead and sample some of the travesties on YouTube, there are plenty to choose from. Even some of the professional opera singers sound strained. I know I heard it sung beautifully at least once. I tried to find a good version to share with you, but it is turning into a hopeless quest and my ears need a rest. But I did come across a marvelous “To Anacreon in Heaven” for your listening pleasure.