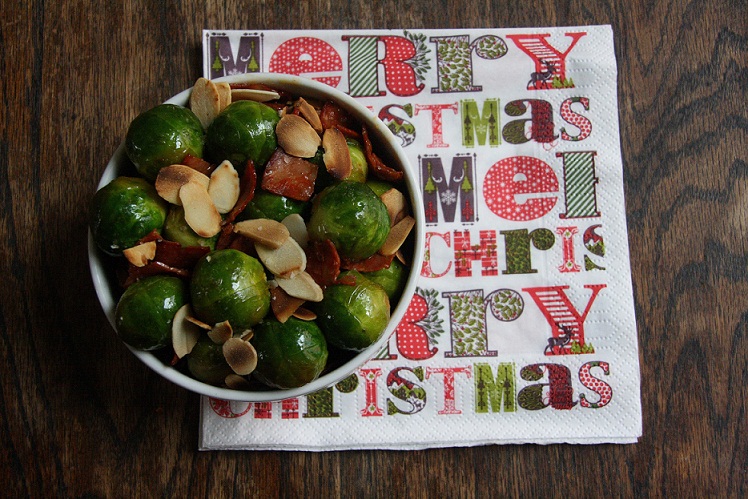 For those who missed it last year, here’s Jassy’s attempt at a Christmas Mission Impossible: making sprouts edible…

Since Cato the Elder suggested them as a cure for hangovers, Brussels have been in the unlovely position of being recommended more often for their health benefits than their flavour. Packed with vitamins, minerals and fibre, they are, like their bigger cabbagey brothers, very good for you. But being a counterbalance to all the Quality Street isn’t a good enough reason to keep a vegetable on my plate. It also has to taste good.

The pursuit of deliciousness begins with not overcooking them. Boiling sprouts until they go mushy releases sinigrin, which gives them that sulphurous smell. If you’re going to boil them, 7–8 minutes should be enough. You want them al dente with a little toothsome crunch. To check, insert a skewer and if it just goes through, they’re ready. And make sure you don’t put the lid on while they cook; they’ll lose their bright green colour and go grey.

Better than simply boiling them, is to boil or steam them for a few minutes and then finish them off in a pan with some fat and flavours. After all, who enjoys plain boiled cabbage or kale? This year, I’m adding some warming Spanish spice to my Brussels with chorizo and a splash of sherry. Prepared this way, there’s a chance I won’t have to coerce the dinner guests into taking a spoonful, but I’m readying my chant, just in case.

1. Toast the almonds in a dry frying pan over a medium heat for 2–3 minutes, shaking the pan frequently, until the almonds are golden. Tip into a bowl and set aside.

2. Bring a pan of salted water to the boil and add the sprouts. Simmer, uncovered, for 4 minutes, so the sprouts are just starting to become tender. Drain and set aside.

3. Pour the oil into the frying pan and warm over a medium-low heat. Add the chorizo and fry, stirring, for 30 seconds. Tip in the sprouts, season with salt and pepper and stir to mix. Add the sherry and fry, stirring, for about 5 minutes, or until the sprouts are just cooked – a skewer inserted should just go through. Stir in the butter and toss to coat the sprouts. Tip into a warm serving dish, sprinkle over the almonds and a pinch of sea salt and serve.

Note on the chorizo: I used sliced chorizo because it’s the easiest to get hold off. If you can get an unsliced chorizo sausage, use that. Skin and chop it into small chunks and fry for 1 minute, stirring, to release the oil.

2 thoughts on “Up the sprout”