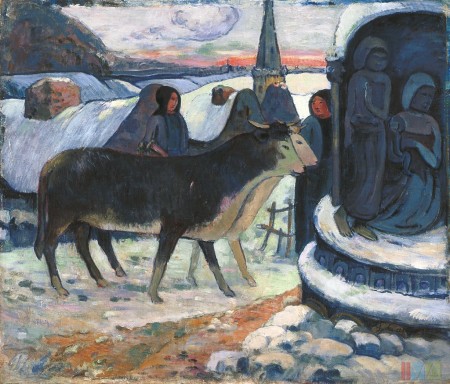 The attractions of a Christmas legend, at least for some.

Here’s one to think about tomorrow, just before bedtime – a poem that refers to a country legend that farmyard animals kneel at midnight on Christmas Eve. By the time it was written Thomas Hardy had lost his faith. It encapsulates my attitude to the Christmas story: even though I also don’t believe it happened like it says in the book, it retains a powerful spell.

I’ve been to two nativity plays this year and each time have been struck by what a wonderful tale it is: it has such a rare and affecting combination of humility, reverence and thanks. Then there’s the pathos of a young and blameless family in need.

However, I gather we’re due to be told on Christmas Day by (former Canon Chancellor of St Paul’s) Giles Fraser that it was first spun in the form we know it at the prompting of the warlike Roman Emperor Constantine, in an effort to make Christianity respectable enough to be the state religion. The ex-Canon believes it’s effectively propaganda that “obscures the true, radical message of Christmas”: “behind the sweet picture of a baby in a manger is a terrifying story about the nature of God and Man” (I can’t help picturing a Doc Marten shoe emerging from a black cassock to stomp on a tiny papier maché cow). Anyhow, I’m not sure we should tell the tinies.

Back to the poem. Over the years I’ve been increasingly enjoying the unfashionable clunkiness of Hardy’s verse: poetry as jolie laide, nicely defined somewhere on the web as where ‘features are not pretty in conventional terms, but nevertheless have a distinctive harmony or charm.’

Christmas Eve, and twelve of the clock.
“Now they are all on their knees,”
An elder said as we sat in a flock
By the embers in hearthside ease.

We pictured the meek mild creatures where
They dwelt in their strawy pen.
Nor did it occur to one of us there
To doubt they were kneeling then.

So fair a fancy few believe
In these years! Yet, I feel,
If someone said on Christmas Eve
“Come; see the oxen kneel

“In the lonely barton by yonder comb
Our childhood used to know,”
I should go with him in the gloom,
Hoping it might be so.

.
(The image is of Gauguin’s Christmas Night (The Blessing of the Oxen)).

6 thoughts on “Thomas Hardy’s The Oxen”