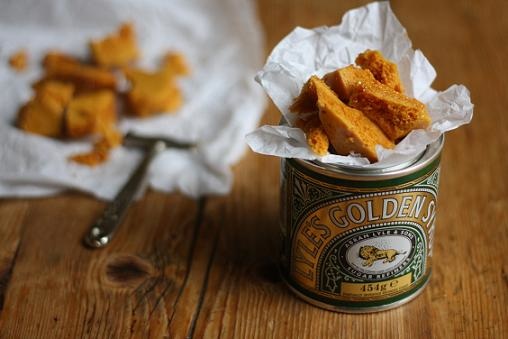 Glue your jaws shut with a traditional Bonfire Night treat.

Honeycomb, yellow man, sponge toffee, hokey pokey, puff candy, the middle of a Crunchie Bar – cinder toffee goes under many names but there’s no mistaking it. The glossy, golden outside that snaps open to reveal bubbles of caramel-coloured sugar makes its way into most people’s childhood, in one guise or another.

The name cinder toffee apparently comes from its resemblance to lumps of burnt coal. Not an obvious lookie-likie, although when it’s made with half treacle and half golden syrup, as some recipes suggest, I expect its similarity to the burnt leavings in a grate becomes more obvious.

It gets its honeycomb appearance from the bicarbonate of soda, which, when stirred in to the hot sugar, breaks down and releases carbon dioxide, making the syrup erupt like a sugar volcano. For this reason, cinder toffee must be made in a large pan. Hot sugar is the kitchen equivalent of napalm – sticking to and burning anything it comes near. Bad enough when it’s just a boiling syrup, a terrifying wave of potential blistered skin when it’s foaming out of the pan and coating the hob.

Your pan should also be good and heavy. I sat mine on top of a diffuser mat to dissolve the sugar, then whipped it away to boil the syrup to the hard crack stage. You should watch it closely while it boils. I didn’t and spoilt my first batch. It turns out that, whatever the name may imply, burnt cinder toffee is not good.

If you have a sugar thermometer, wait for it to hit 150°C. If you don’t – and I don’t: I’m not fond of gadgets and thermometers still come under the heading of ‘frighteningly modern’ for me – then a glass half-filled with cold water will resolve the issue. When the syrup is beginning to look viscous and very lightly golden, take it off the heat and drop a teaspoonful into the cold water. If it hardens into a golden lump that snaps, it’s ready. A very handy chart to the different stages of sugar boiling points here.

Smashed and chewed while watching fireworks weave their way across the sky might be the traditional way to eat it, but if you don’t manage to consume it all in one night, fold little chunks of it into softened vanilla ice cream and freeze it to make instant hokey-pokey ice cream.

Grease a 20cm square cake tin with sunflower oil and set aside. Place a glass of ice-cold water by your hob.

Place the sugar, syrup and vinegar in a large pan with 150ml cold water. Gently heat, stirring with a flat-bottomed wooden spoon, until the sugar has dissolved.

Turn up the heat and, without stirring, boil the sugar syrup until it has reached the hard crack stage. If you have a sugar thermometer, it’s 150°C. If you don’t, then it takes around 5–8 minutes and the sugar syrup will be thick, glossy and pale golden.

To test the syrup without a thermometer, take the pan off the heat (this is very important) and drop a teaspoonful of the syrup into the water. If it’s hard and snaps sharply without being sticky, it’s ready.

Make sure the pan is off the heat and stir in the bicarbonate of soda. It will erupt like a sugar volcano. One it has calmed down a bit, pour the toffee into the greased tin (use the wooden spoon to scrape it in – don’t use a metal spoon).

Leave the cinder toffee to go completely cold. Turn out of the tin and smash into pieces. It will keep for at least a week in an airtight tin.