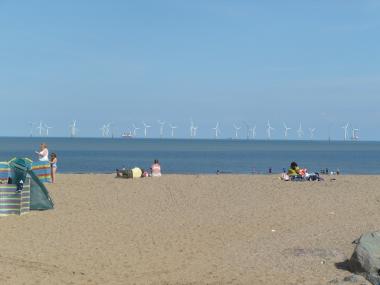 A few weeks ago I found myself clamped in the teeth of a North Sea gale, on a bitter July Tuesday, trying to make a sandcastle from the brown sludge of Skegness beach.

It was a corporate team-building thing. My team lost, our castle having drowned in the alarmingly rapid flood tide before it could be judged. We’d put a lot of hard, joyless labour into it. I watched it go under the waves, the collars of my summer raincoat turned up in a doomed attempt to keep the worst of the drizzle off my neck. It was that really wettening drizzle that you only get in English seaside towns. Out in the grey seas, the vast turbines of the Lynn and Inner Dowsing Offshore Wind Farm turned, turned, turned.

Now we can all agree, I hope, that the proliferation of wind farms across the British landscape, from Scotland to Cornwall, is one of the most gobsmacking acts of madness in our nation’s history: a wilful vandalism of our green and pleasant countryside – for the sake of, what? …Saving a drop in the carbon ocean? Setting an example to the Chinese and the Indians (who, if they followed it literally, would put turbines along the Great Wall, or stick a plastic recycling plant bang in front of the Taj Mahal)? I’m convinced that a few decades hence we’ll come to our senses and take all the wretched windmills down again; for now, we bribe landowners with vast sums to wreck beauty spots and natural habitats and lovely walks, so that we can pay lip service to the great global committee follies of warmenism and their terror of temperature.

But I digress and, be all that as it may, it’s fair to say that Lincolnshire’s offshore wind farm doesn’t really wreck Skeg. It doesn’t improve it either, but the incursion by liberal modernity into a corner of rough old workingman’s Blighty is an interesting juxtaposition, like a Starbucks opening in Toxteth. I’d never been to Skegness before and I expected it to be one of those places that’s better than you’d imagine. But in fact it is exactly how I imagined: like Blackpool, but smaller and sadder. There is a pier, a tattered funfair, an amusement arcade, a lapdancing club, a bowling alley, a clock tower and a terrible sense of innocence lost. During our day we experienced all of these except the lapdancing club. We bought some tat and we drank beer and ate pretty good fish and chips at The Clock Restaurant before being herded onto the beach to make the humiliating sludge-castles.

Perhaps if you grew up in Lincolnshire or in some landlocked county like Leicestershire, where Skeg was your annual seaside treat, then you might enjoy sweet pangs of nostalgia even now. Do you? The great robotic windmills won’t help with that.

“Yes, it does have a certain subtle elegance.” I agreed. “Still, there’s always McDonalds, look.”

“McDonald’s is the poshest place in Skegness,” said Jeremy.

“In Skegness, people get specially dressed up for an evening out at McDonalds.”

We snickered nastily over our shared middle-class snobbery. Indeed, we team-bonded over it.

25 thoughts on “Summer in Skegness”