When Malty discovers that his be-mulleted German businessman pal Willi bears a startling resemblance to the conceptual artist Hans-Jürgen Schult, it leads him on a meandering philosophical journey that finishes up with Richter’s nude wife…

This is not about Willi except that were it not for him, I may have ignored Hans-Jürgen, although if you happen to be in the reception area of any public building in Germany the chances are that those flowers or shrubs in fancy planters that draw your attention were leased from Willi.

Say what you will about old Schulty, no other conceptual artist can fill a municipal void better than he, and in mitigation, he is from Mecklenburg, where they are a bit, not as we are. He first came to my attention after seeing his photograph. He bears a striking resemblance to an acquaintance, Willi G who, like Schulty, is one of those larger than life characters, part Karl Lagerfeld, part Bill Bailey, mullet flowing in breeze, ever weighing up angles, distances, business opportunities.

Some time later and purely by coincidence I stumbled across one of his eye popping trash people happenings, sown across the plaza between the Dom and the Roman Museum. 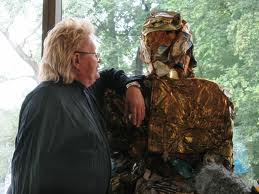 The effect was startling and hilarious, the area is usually the preserve of chanting groups of pilgrims doing religious stuff. A good number were standing around radiating perplexity or assuming that the figures were pilgrims from Mars. The creations are cobbled together entirely from the un-recycled contents of dumpsters, rotten old drinks cans actually. In every sense, it was a happening. I nearly said groovy baby but then you would be able to count my growth rings.

Schult studied at the Düsseldorf Academy of art during the golden period that also saw Gerhard Richter and Sigmar Polke study there. The academy has had through its portals some seriously influential artists, including Paul Klee, Arnold Böcklin and the writer-artist Gunter Grass. It would appear that, although an industrial then post industrial city, in an area, the Ruhr, once famed for its heavy industry, Düsseldorf has been fertile ground for the artist. Shulty, like Richter, now lives and works in Köln, scene of his finest happenings.

So, lets raise a glass and spare a passing thought for the barmy end of conceptual art, it is not all barmy, here’s Schulty’s golden winged car sitting majestically atop the Zeughaus, the city museum although the good krauts in the Rathaus have cropped it from the official blurb.

Seeing Richter’s name mentioned above has reminded me, over at young Appleyards blog he posts on his ST article which includes a piece on the Richter Twin Towers painting and mentions the forthcoming Tate exhibition of his work, Gerhard’s that is, not Bryan’s. Well worth the effort especially if it includes the overpainted photographs…

This disturbing work of art hung for some years in Kölns Ludwig museum, facing, across the mezzanine, his forty eight portraits, the figure is Richter’s first wife Ema, the photograph taken in the sixties. The picture possesses a melancholic quality almost as if the artist is describing some elusive feeling of regret. Some say that it encapsulates that golden period in a relationship, the pre sprog arrival time when, if the chemistry is working you can’t keep your hands off each other, those Romeo and Juliet moments, or possibly Romeo and Romeo or Juliet and Juliet, who knows? pessimists may say before the rot sets in although both of those sentiments may today be considered somewhat dusty, very relevant for the period.

The museums head poo-bah dropped a (very rare) clanger, for a while Ema’s neighbour was a gigantic shitstained Gilbert ‘n George. She did not seem amused, nor was Frau Malty, wanting to attack the poor chap with handbag and brolley. Sitting downstairs once again in front of Perpignan Station quelled her fires.