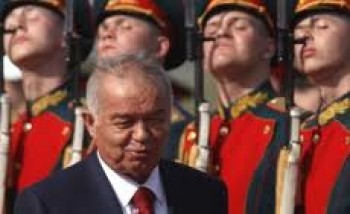 After a well-deserved break from reading the works of maniacal dictators, Daniel Kalder continues his popular series. Today we meet an authoritarian despot who in his writings manages to do a passable imitation of a human being.

Islam Karimov (b.1938) was appointed General Secretary of Uzbekistan‘s Communist party by Mikhail Gorbachev in June 1989, days after interethnic violence between Uzbeks and Meshketian Turks in the Fergana Valley had cost 200 people their lives, and a further 160,000 people their homes. Karimov immediately banned all public meetings, arguing that while all this glasnost malarkey might work well in Leningrad, it didn’t suit volatile Uzbekistan. And that pretty much set the tone for how he was going to govern the multi-ethnic, multi-confessional state, both pre- and post-independence.

Karimov’s CV ticks all the boxes required of a central Asian dictator: technical education; CPSU membership; rise to power as a God-denouncing, party apparatchik; and then, post 1991- rebirth as an Islam- praising, (allegedly) democracy-loving, (allegedly) market-embracing reformer. He is also a prolific author whose most famous book, Uzbekistan on the Threshold of the 21st Century, first appeared in Uzbek in 1997 and was then translated into English a year later by a mysterious, nameless firm in Cambridge, Massachusetts.

The book contains numerous surprises, foremost among them being that it is actually quite well written. Indeed, after Brezhnev’s (ghosted) autobiographical trilogy, it is undoubtedly the most lucid work of dictator literature I have yet encountered. Almost immediately I knew I was in the hands of an authoritarian despot who could nonetheless do a passable imitation of a human being, whose intellectual energies were not solely dedicated to generating fear, funnelling money to Switzerland and erecting monuments to his own wonderful self. Indeed, as the pages of coherently expressed, logical ideas went by I could not resist the conclusion that Karimov is genuinely intelligent, and not merely cunning and ruthless (although no doubt he is those things too).

Karimov’s ultra-dry outlook (he studied both engineering and economics) is evident in his fondness for clear organisation and bullet points. Uzbekistan on the Threshold reads like a detailed report on the country written by its chief executive for the attention of future investors. The book has an extremely simple structure, and its headings are self-explanatory. For instance: Part I, “Threats to Stability and Security” is followed by detailed discussions of the following themes: 1) Regional Conflicts; 2) Religious Extremism and Fundamentalism; 3) Great Power Chauvinism and Aggressive Nationalism; 4) Ethnic and Inter-ethnic Relations; 5) Corruption and Clan Influence; 6) Regionalism and Clan Influence; 7) Ecological Challenges. This is followed by the equally systematic Part II, “Toward Stability and Security”, and Part III: “Promise of Progress”.

Throughout, Karimov remains resolutely un-seduced by ego, and sticks to the restraints his structure imposes. He is so reasonable, banal even, that you might find yourself agreeing with him, when he says things like this:

Human beings are unable, for obvious reasons, to choose their race or ethnic identity, or to select their parents, but their world outlook, and their spiritual and moral choices can and must be made privately without any external force or pressure. And these choices must be respected.

And then there’s this:

Above all, participation in the securities market encourages individuals to purchase securities and fosters the habit and culture of ownership. It is important that people think of themselves as stockholders not only for the sake of owning shares, but because they are the real proprietors of part of the nation’s property and as owners, have the opportunity to affect the financial success of their enterprises.

Actually, I dozed off during that last bit.

Karimov also argues forcefully (he breaks his argument down to seven points) that Uzbekistan faces a serious threat from Islamic fundamentalists both outside the country (from Afghanistan andTajikistan) and internally (for instance, starting in the 1980s, Saudi-funded Wahhabis infiltrated the Fergana Valley). Fortunately he is committed to a vision of a stable, open, democratic state respecting the rights of everyone, so that’s nice.

And yet … and yet. Uzbekistan on the Threshold was an extremely difficult read. It is excruciatingly boring; although not pathological-boring like the works of Kim Jong Il or Ayatollah Khomeini, whose books have a hallucinatory intensity about them, rendering the experience of their prose akin to reading trippy SF. Not having lived in the open air prisons they have built I use those deathly volumes as psychic gateways into hell-worlds.

Karimov by contrast is boring in a Clinton/Blair way. Indeed, Karimov’s bland liberalism sounds as if it may have been written by a Clinton adviser sometime in the mid-1990s. And aside from a brief and lacklustre diversion into nation-building with the fictional claim that the (non-Uzbek) 14th-century conqueror Timur/Tamerlane was the father of the Uzbek nation, Karimov cleaves stubbornly to his centrist, moderate line. Indeed, reading his book is like sitting through a very tedious conference on growth and development in the developing world, watching as self-righteous NGO-jetsetters in expensive suits deliver platitude after platitude, shortly before they head off into the night to fornicate with emaciated young flesh, and possibly eat a still-warm human liver, freshly plucked from its victim’s corpse.

That is to say, Uzbekistan on the Threshold makes you feel rather sick – because of course, Karimov is not a liberal at all, but rather a man who stands accused of deploying torture against his enemies, of failing to distinguish between Islamists and devout Muslims and oppressing both with extreme violence; of rigging elections; and most notoriously of ordering the massacre at Andijan where Uzbek forces fired upon a crowd of protesters, leaving hundreds dead. Clearly he doesn’t believe a word he says, does he?

Well, you never know. Some time ago a man who was a student in Tashkent during the 1990s told me about the publication of this book. It was all over the media, he said, and student groups were encouraged to discuss its contents. And they did just that. And almost immediately they were told to stop, because it is filled with democratic, liberal ideas. The students had forgotten that since Karimov is a dictator, there was only one interpretation of those ideas; and perhaps Karimov, in his authoritarian isolation had forgotten that too; surrounded by sycophants he had come to believe his own hype.

And so Karimov carries on oppressing minorities, the opposition, religious people, and basically anyone who disagrees with him. Then again, he does dedicate the first 70 pages of the book to “Threats to Stability and Security”. Fortunately for Karimov, being a dictator, he gets to decide what that means, and what to do about it.