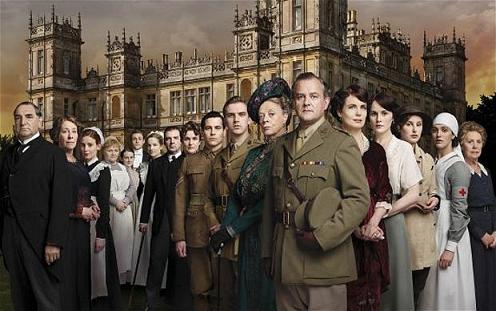 “What shall we call each other?” asks the visitor.

“Well, whay don’t we start with Deem Meggie Smeeeeeeuth?” drawls Jennifer Saunders in the Comic Relief spoof of Downton Abbey – the only funny bit of Red Nose Day 2011 and a take-off so unerring and thorough that it rather renders any snarkery I might feel like indulging in here redundant. That won’t stop me indulging, of course, but you’ll enjoy the video below.

On Sunday Downton Abbey scooped four Emmys in Los Angeles and also returned for a second series on ITV1. An instant national treasure, it is without doubt one of the biggest, lushest, most high-calorie piles of tosh ever served up for our Sunday night consumption. It’s a marvel. I’d love to know how seriously the gong-giving Americans take it because I laughed heartily throughout this week’s opener. The Somme trench scenes were the first ribticklers, being comparable to those in Blackadder Goes Forth.

“Bloody hell, this war is bloody hellish” said our handsome hero, or words to that effect, staring into the middle distance behind our sofas. “It doesn’t half seem a jolly long time ago that I was back in…..Downton Abbey”. Cut straight to the hard stuff – butlers, maids, starch, cooks, frocks, stiff upper lips, Dame Maggie Smith (by miles the best thing in it) and all the other elements of the Sunday night fix of Edwardian Country House porn that apparently over 10 million of us have been pining for since November 2010, only this time with the added spice of uniforms, for now the Shadow of War hangs over Downton Abbey like a big War-shaped Shadow!

Not one single moment of Downton Abbey is even the teensiest bit believable. Four separate romantic melodramas are crammed down our gullets at once, sickly and superfluous as a handful of Thorntons Strawberry Velvets after pudding. Our handsome hero and the eldest daughter have an ongoing pride and prejudice thing which is so complicated that I can’t remember who rejected who last. The doomed class-divide fling between the youngest gal and the Oirish chauffeur plods its tiresome course to Gretna Green. A couple of young servants are at it and he’s obviously about to go off and get killed in France because he keeps chirping on about how keen he is to sign up while the womenfolk fret and mother him. 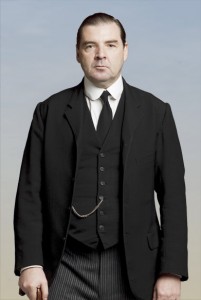 Then there’s the chaste affair between the sensible maid and the valet Bates (right). Ah, Bates! Brave, saintly, gammy-legged Bates: a comic masterpiece, that character. Nobody in the history of western civilisation has been so consistently wronged yet borne it with such stoical dignity. Everywhere he goes, he gets slandered, libeled. He hears words he never heard in the Bible. Like a recurring Fast Show gag, each week a grotesque injustice  is visited upon Bates, and each week he allows but the merest flicker of pain to cross his seen-it-all features and the faintest sigh of long suffering to pass his lips, before he straightens up, mans up, fronts up, and yet again limps away to fall on his sword for the greater good of Downton.

How I yearn for him to flip and go on a bloody axe rampage, but I fear that writer Julian “The Luvvie’s Luvvie’s Luvvie” Fellowes will be heaping unfortunate misunderstandings on his broad and dignified shoulders for some years to come.

For there is no end in sight for Downton Abbey: its comfortingly familiar pebbled driveways stretch far into the otherwise frightening and unknowable future. Already Fellowes is cooking up a post-Armistice third series. As with The X-Factor, ITV has struck gold: award-winning, critic-defying, transatlantic gold, which can be enjoyed by all age- and socioeconomic-groups, either straight up or with a generous dash of irony and – being ITV and thus lacking any qualms about quality control that might even now be holding back the resurrection of the far-superior Upstairs Downstairs – it will keep mining that seam until it is utterly spent.