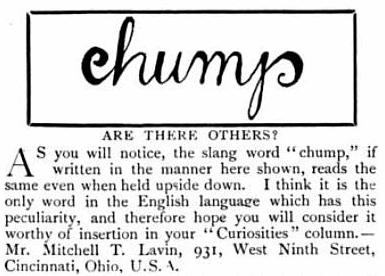 In June 1908 the British magazine The Strand received a submission to its ‘Curiosities’ column from one Mitchell T Lavin of Cincinatti, Ohio.

Mr Lavin enclosed a calligraphic representation of the word ‘chump’ which, when turned upside down, still read ‘chump’. He added: “I think it is the only word in the English language which has this peculiarity.”

In the August edition, The Strand published another submission from the US, this time from a Mr V K Allison of Lawrenceville, New Jersey. Mr Allison claimed to have “succeeded in discovering” another “reversible word”, despite such being “very few and far between.” His word was ‘honey’: 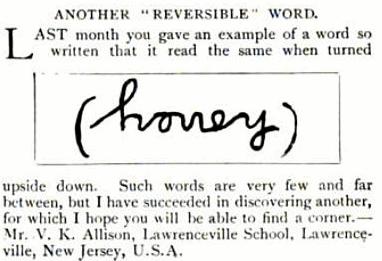 Obviously convinced that this reversibility was a rare property of only very few words, it must have come as a surprise to Mr Allison and Mr Lavin to read the correspondence published in the September issue of The Strand.

Mr B R Bligh of 2, Porchester Mews, Bayswater enclosed a name, ‘W H Hill’ which, when written in funny handwriting, read the same upside down. Mr Bligh asserted: “Surely this is the only name possessing so convenient a peculiarity.” 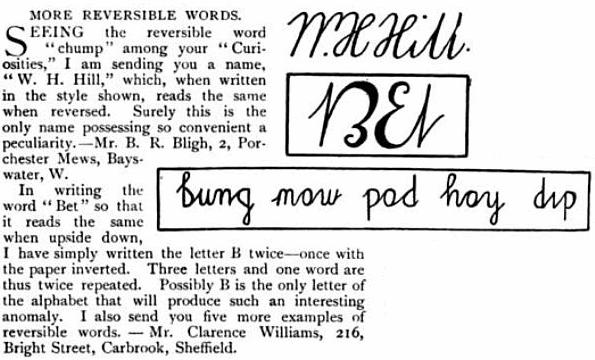 The floodgates were open. In the same issue Mr Clarence Williams of Sheffield revealed the curious properties of the letter B. “In writing the word Bet so that it reads the same when upside down,” he said, “I have simply written the letter B twice – once with the paper inverted…. Possibly B is the only letter of the alphabet that will produce such an interesting anomaly.”

But B was not the only letter that produces such an interesting anomaly. And ‘W H Hill’ is not the only name with the convenient peculiarity of being vertically flippable. And ‘honey’ and ‘chump’ are very far from being the only ‘reversible’ words in the English language. For ‘ambigrams’ (the term was coined by Douglas Hofstadter in the 1980s) are legion and can be created in infinite ways.

The New Man logo, designed by Raymond Loewry in 1969 is one. So is the Deloreon Motor Company logo, created in 1975. At least three artists claim to have invented them independently.

You can even create your own online from any word with this ambigram generator. And pioneers Messrs Lavin, Bligh, Allison and Williams were merely glimpsing the tip of a strange typographical iceberg.

I draw no particular conclusion from this story, I merely relate it, and you can draw whatever lessons you see fit.

6 thoughts on “A Short History of Ambigrams”