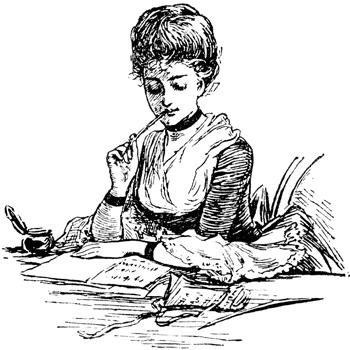 ZMKC recalls an early experience of being too creative for a ‘creativity-first’ school, and explains how it has influenced her career as a blogger…

When I was about nine I began exchanging letters with a girl called Paula who was in the year above me at my funny little Froebel school. I don’t know what Froebel theory is, but as it was practised there creativity was the key to everything. We wrote stories, we painted, we made glove puppets, we clay modelled. We had a nature table to which a boy called John Belgrave, who claimed to own the whole of Belgravia, once contributed a dead mole and another time a perfectly ordinary looking rock which he claimed was a meteorite he had caught with his bare hands, and a set of Cuisenaire rods –  but that was as close as we got to maths or science.

I can no longer remember how the letters started. I don’t know whose idea it was – I don’t remember talking about it or agreeing to give it a go. All I remember is that we wrote as if we were a pair of businessmen, and the letters were taken up entirely with arrangements to have meals together or discussions about the meals we’d had the last time we’d met. ‘Dear Dewsbury-Briggs,’ I would write (we settled, without any discussion, on the use of surnames, possibly because we both had brothers who went to boarding schools and had learnt from them that this was how things were done) ‘I’ve been away investigating sales possibilities in the South of France but am back in London for a week or two. Wondering if you feel like lunch some time – we could go to the Poule au Pot, although I gather the duck is not what it was, so perhaps my club – Tuesday, 12.30, if you’re free?’ and she would write back to me in similar vein. The whole thing gave us a lot of stupid amusement.

And then one day one of the teachers discovered our correspondence. We were each asked to explain ourselves. Why were we doing this? Neither of us had the faintest idea. Distrustful of such mysterious behaviour, the powers that be made it clear that we had to stop. And so, feeling rather ashamed, we did.

I’d forgotten about this episode until the other day when someone asked me why I blogged. Those absurd letters came back to me and I realised that the empty space that they’d left – the one marked ‘pointless fun’ – has at last been filled: by blogging. Like my letters to the imaginary Dewsbury-Briggs, my blog posts do not bring me any money or get me any closer to getting a certificate or a better job. They are just a way of doing one of the best things of all in life, one of the things we’re not really supposed to do (especially once adult) – being idiotic and mucking around.

10 thoughts on “The Pleasure of Pointlessness”