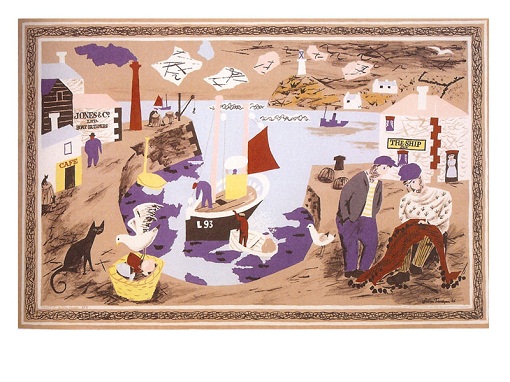 For me, it was Rembrandt’s Portrait of His Mother (the one in the Royal Collection), in a black-and-white reproduction in an encyclopaedia. I was 9 or 10 at the time, and this was the first picture I saw that moved me, and gave me an inkling of what a painting can do to a person.

Later, at grammar school, I found the main corridor dotted with colour reproductions, faded and cyanosing, among which I remember The Fighting Temeraire, Flatford Mill, a Matisse with a bowl of goldfish, a blue period Picasso. All these took me farther along the path, inspiring me to seek out art books at the library, begin my (amateur) education in art, and discover what was to be a major source of pleasure and much more for the rest of my life.

What I did not see – and wish I had – in my formative years were the School Prints. These were the brainchild of a remarkable woman, Brenda Rawnsley, arts campaigner, art education activist and wartime WAAF Squadron Officer, who in 1945 took over a company called School Prints Ltd and gave it a new lease of life by getting an impressive roster of contemporary artists to create limited-edition prints which could be sold at low price to schools, giving them a taste of good modern work to sharpen children’s appreciation and enjoyment of art.

She soon had the likes of John Nash, Julian Trevelyan (that’s his jolly Harbour above) and Feliks Topolski signed up, producing characteristic work that made little or no concession to being ‘for the children’. These colourful and lively works would at the time have seemed far more avant-garde than they do now, when they have gained a nostalgic period charm. Before long Rawnsley was going international, persuading the likes of Dufy, Matisse, Picasso and Braque to sign up.

Sadly, however, the launch of the international series coincided with Sir Alfred Munnings’ idiotic but highly influential tirade against Picasso and Matisse at the Royal Academy’s 1949 annual dinner. British public opinion naturally swung behind Munnings, and the series flopped, leaving Rawnsley with large numbers of unsold prints and larger debts. This was the end of a brave and brilliant experiment, which must have done much to open the eyes and stir the imaginations of those children lucky enough to have had School Prints on the walls of their school.

Rather wonderfully, a lot of them can still be bought (at rather higher prices than Brenda Rawnsley envisaged) – you can see them, with a short account of the School Prints project, here.