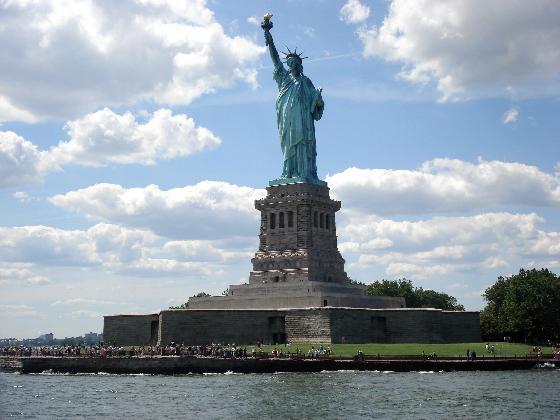 Launching a new occasional series for the Dabbler, Rita Byrne Tull brings us our very own version of ‘Letter from America’…

Two score and one years ago I boarded a student charter flight and crossed the ocean to the New World. I had just $200 in my pocket and a backpack of spare clothing, blue jeans and mini-skirts of course, the de rigueur attire of the age. But no, this isn’t a rags to riches American immigrant’s tale of pulling myself up by my go-go bootstraps to become a dot.com millionaire. It is a confession. In all this time I have never met a Real American.

I’ve heard of them of course. Who hasn’t? They are said to roam the hinterlands between the coasts and in hunting season, otherwise known as election season, politicians converge on their habitat to stalk them down and bag their votes. You must have seen the illustrations: gun-toting, Jesus Saves T-shirted, beer-bellied, stars-and-stripes waving, gas-guzzling, mean-spirited specimens who are the only inhabitants of this vast nation that certain politicians seem to care about. What’s more, all politicians have to prove that they too are Real Americans. That means going bowling rather than say, wind surfing. John Kerry’s White House hopes were doomed when he was seen tacking back and forth on his surfboard. Barack Obama didn’t make the same mistake. He did go bowling. But being African-American he had to provide a higher standard of proof. His poor score was further evidence, if any were needed, that he isn’t American at all, never mind Real. Another Realness test is the “are you sufficiently gun loving to actually appear on TV shooting helpless animals and, in the aftermath of a college mass shooting incident, advocating that everyone, including students on campuses, must carry guns?” Again, this is a tricky one. Dick Cheney passed with flying colors by shooting a friend, John Kerry was judged not to look enthusiastic enough while shooting at ducks, and for Barack Obama the test was reversed. In one of those peculiar racial calculations that you have to live in America for many decades to begin to understand, Obama could not be seen with a gun at all because then he would be “an angry, potentially violent black man” and completely unelectable.

Maybe I haven’t met a Real American yet because I’ve only lived on the coasts: in the People’s Republic of Berkeley during the 1970’s where the 1960’s were still going on, and ever since in the shadow of the Nation’s Capital, home turf to the “librul media.” The Americans I live and work amongst are all such nice, kind, friendly people. They are intelligent and well read (I know, I work in a library). Many of them voted for Barack Obama; he was real enough for them and actually spoke in sentences. I’m beginning to wonder if Real Americans are creatures of myth, mass-produced in the fevered imaginations of politicians and their media enablers, straw men to battle over while the real real Americans, like the ones I know, live quiet unremarkable lives.

It’s hard to know, because changing countries is very confusing. On one of my visits home to England I went to pick up dinner at the local fish and chip shop. When I gave my order the chap behind the counter asked “Where are you from, love?” I was surprised by the question and answered “From here, I grew up around the corner.” “Well” he replied, “you musta bin somewhere.” Yes, I bin somewhere, and now I’m neither here nor there.

17 thoughts on “Dispatches from the Former New World: Real Americans”