In the third part of our exclusive serialisation of Blogmanship (available as an eBook from Amazon or as a PDF here), Noseybonk looks at how Britons and Americans can go ‘one-up’ on each other on the internet…

Special Relationshipmanship: The Shrunken Pond
One of the unexpected benefits of the internet has been the breaking down of those international barriers – of time, cost and practicality – that once prevented peoples separated by oceans from daily arguing with each other at protracted length about gay marriage and suchlike.

Nowhere is this heartening eradication of artificial borders more apparent than in the brave new world of Anglo-American Blogmanship. We speak here not merely of those controversial topics where a typical American and a typical Briton might be expected instinctively to disagree (the literal truth of the Bible, the benefits of proliferated gun ownership, the manliness of different professional ballgames et cetera), but rather, more particularly, of those areas of shared interest. For remember, the Blogman is not simply concerned with besting an opponent in a debate; but, perhaps more importantly, in how he can go one-up on somebody with whom he fundamentally agrees.

The 2003 Allied invasion of Iraq has been widely pinpointed as the true catalyst for the development of Special Relationshipmanship*, since it enabled Americans and Britons on both pro- and anti-war sides to come together and irritate each other in a spirit of brotherhood and mutual respect. Here are the principal ploys… 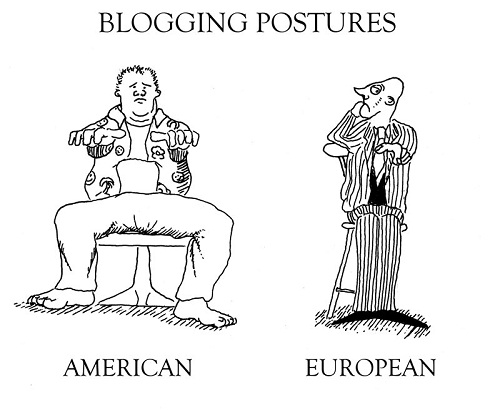 The weight of history; the power of geography
The basic Britishman gambit is to imply, politely but with annoying sureness, that the American is in a natural state of one-downness because the US is still in its infancy when viewed in the context of the rich and ancient culture of the ‘Scepter’d Isle’. Comparing current affairs to ‘fairly recent’ events in the fifteenth century, for example, is classic historyship.

In reality, the British blogman – especially the younger man burdened with a comprehensive education – may be no more knowledgeable of matters historical than his powers of searching Wikipedia allow; but, done well, historical condescensionplay can create a strong impression that the American is a hopeless naïf, blundering about the intellectual sphere like an earnest teenager while the Briton looks on with the not-unkind amusement of the old hand who has ‘seen it all before’.

This is especially powerful when augmented with geographyplay. Americans, uniquely in the world, have a tendency to see Englishmen as multi-lingual globetrotters, as comfortable ordering the escargot in a ‘lovely little out-of-the-way bistro they know on the banks of the Seine’, as they are coolly dismissing aggressive peddlars in the Casablancan bazaar from beneath a Panama hat. The Angloblogman will often find that a few ‘that’s not what they used to tell me in Cairo’s yield returns; and suddenly making a whole comment, a propos of nothing, in either French or Latin (but not Spanish) is almost guaranteed to ramp up the pressure on the United Statesman.** As ever, there are counters.

Counter-historying
Although it will be his first instinct, almost the worst thing the United Statesman can do when faced with with historiogeographical gambiting is to claim to be Scottish/Irish/Danish himself, because of some tenuous ancestral link. Calling oneself ‘a Scotchman’ simply because one’s great-great-great-great-great grandfather had a Mac in his surname has never cut any ice with Britons, who are well aware that the whole family tree industry is nothing more than a gigantic scam for selling tartan tea-towels to Texans.

Instead, the clever American blogman should employ reverse-historyship to hoist the Briton on his own petard. Renowned blogman Randolph ‘Randy’ Linburger III precedes almost all cross-Pond correspondence with the phrase “I’m just a simple old country boy, but seems to me…” despite having lived his whole life in Manhattan. The desired effect of downhome-ism is to suggest that the English blogman is stuffy, out-of-touch and belongs to a lost, irrelevant world. Exaggerated politeness (using ‘Sir’, or, better, Mistering – e.g. insisting on addressing someone with the moniker Creepie Crawlie as “Mr Crawlie”) is good, implying a wrong belief that that is how Britons always talk to each other, whilst also satirising it.

You can also greatly irritate the British by using any of the following:

Saying that I guess I don’t understand these nuances is potentially deadly, as it obliquely accuses the Englishmen of being effeminate, wishy-washy and vaguely French. Which brings us to…

Counter-geographyplay: Europeanship
When either arguing or agreeing with a Briton, the American blogman should refer wherever possible to his opponent/ally as a ‘European’. “I know you Europeans love soccer, but…” will cut any trueborn Englishman to the quick, containing as it does a grain of hideous truth.***  ‘Old Europe’ is even crueller (many think it beyond the pale of blogman ethics).

For broader plays, we turn again to Linburger III who, rather than attempting to disguise his geographical ignorance, greatly exaggerated it, with impressive results. Linburger never knowingly fails to mix up the home nations and even refuses point-blank to believe that Wales exists at all, bestowing upon it a mythical status, like Camelot.

All mainland European cities are presumed to be within walking distance of each other and Something-istan covers the Middle East and Central Asia. Brilliantly, Linburger then displays a thorough knowledge of the populations and industrial specialisms of the cities of India and China, since they’re ‘the superpowers’ worth knowing about.

Chamberlain-Churchillship
This gambit in Anglo-American blogplay is so ubiquitous as to be clichéd, but it retains the power to irritate the Englishman. The trick is to describe anything good that Britain does (or a British blogger says) regarding foreign policy as ‘Churchillian’; and anything bad or weak as ‘Chamberlain-like’.

The beauty of the ploy is that it purports, by invoking Churchill, to praise, while actually implying that Churchill was a flukey one-off who singlehandedly prevented a nation from going the way of France, and that the English norm is represented by the Hitler-appeaser Neville Chamberlain.

*This rather cumbersome term is now usually abbreviated to just ‘speshrellyshipmanship’ when gathered Blogmen are ‘talking shop’.
**Google’s translation tool is a boon here, but take care to remove any funny foreign accents and symbols when copying and pasting, or it won’t look like you’ve just reeled it off the top of your head (see Typomanship)
***However, American blogmen should take care when ridiculing soccer, as there are easy counters, with American Footballers essentially playing rugby in unmanly protective armour and baseball being a (slight) variant on ‘rounders’ – a British game for schoolgirls

COMING UP TOMORROW: Advanced Blogmanship, including Moral Indignationship; and How to Wriggle out of Arguments you have Clearly Lost…

11 thoughts on “Blogmanship: How Americans can annoy Britons, and vice versa”