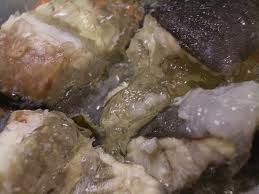 I was in my local fishmonger’s on the weekend, Steve Hatt on the Essex Road. Whilst I was waiting to be served I took a look at their list of orders for collection on the day. It was mostly fashionable seafood for smart local restaurants – I noticed Ottolenghi were due to pick up 2kg of razor clams and 3kg of king prawns. But there was also one entry that read:

Jellied eels somehow seem a more appropriate accompaniment to a funeral than baked meats. I can see the mourners exchanging regretful comments between lugubrious spoonfuls of silvery eel and golden jelly, turning away occasionally to suck on the odd piece of protuberant cartilage.

However, whilst I like seafood and I like pies, it pains me to say how much I dislike traditional Cockney grub. I think it’s fairly self-evident what’s not to like about eels, even though they are very popular with some (all of them too: my old London-born Pop used to scoff even the cartilage). But with pie and mash, what seems promising is let down by poor quality and execution.

The last time I tried a portion was at Clarke’s, down on Exmouth Market in Clerkenwell. Gritty mince, leathery pastry, insipid liquor and watery mashed potato. The application of lots of malt vinegar and white pepper got me through. It was very cheap, mind, and they were quite busy.

I don’t like being so critical of this sort of food, which I’ve always found to be one of the more reliable things to be found in the world. In fact, I can’t think of another instance where I haven’t liked the local, traditional, everyday food of a place (unless it’s featured tripe): wurstl, pizza, croque monsieur, balti, burgers, gallettes, chips and mayo, waffles, herring (pickled and smoked), tapas, salt beef, stovies, noodles, fish and chips, tacos, kebabs, knishes, dosas, phô, pasties, pelmeni (OK, perhaps I’ll make an exception for that last one – the Russian equivalent of the Cockney pie). And so on. No, I really would like to enjoy Cockney grub. But I just can’t – it’s simply no good.

P.S. It was a rewarding visit to the fishmonger. Poached cods roe, dipped in beaten egg, rolled in seasoned flour, then shallow-fried and eaten with chopped parsley and a squirt of lemon. Words fail me.