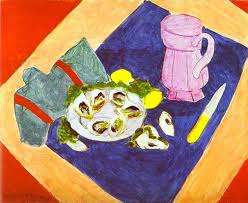 I came a bit late to oysters: I was well into my twenties when I discovered I’d somehow lost a physical aversion to shellfish brought on by the catastrophic and surprisingly persistent consequences of a dodgy brochette de moule eaten on the harbour at Toulon as a boy. I’ve been trying to make up time since.

We should all eat more of them. They’re a sustainable resource that happens to be very acceptable from local, British sources. They’re good for you, being full of minerals, vitamins and protein. But most of all they seem to reach parts that very few foodstuffs do (no, I’m not referring to the belief that: ‘they’ll make you a dad / Of a lass or a lad’, as Swift put it).

They have mystical qualities. Saki, albeit with a touch of hyperbole, thought so:

I think oysters are more beautiful than any religion… They not only forgive our unkindness to them; they justify it, they incite us to go on being perfectly horrid to them. Once they arrive at the supper-table they seem to enter thoroughly into the spirit of the thing. There’s nothing in Christianity or Buddhism that quite matches the sympathetic unselfishness of an oyster.

However, for me their self-sacrifice is trumped by their peculiar magic-carpet quality. Their ritual eating is as close to experiencing the wild wetness of the sea as you’re going to get whilst sitting in, say, central London. They’re an ocean in a capsule. Is there any other food that is quite so good at transporting you? Hemingway captured some of this experience in what is a canonical description:

As I ate the oysters with their strong taste of the sea and their faint metallic taste that the cold white wine washed away, leaving only the sea taste and the succulent texture, and as I drank their cold liquid from each shell and washed it down with the crisp taste of the wine, I lost the empty feeling and began to be happy and to make plans.

There’s an awful lot to an oyster and it’s good to see them becoming more popular in the US. My own observations lead me to believe they’re getting more popular over here too – though I’ve no proof beyond a vague impression that more restaurants and pubs seem to be putting them on the menu, and a flurry of recent media appearances: the estimable Jay Rayner has been doing more than his bit this month on The One Show and in a rather poetical newspaper article; they also featured prominently on last week’s The Food Programme.

In any event, we have a very long way to go to come close to competing with the Victorians in the ‘scuttle-mouth’ stakes: Mayhew reckoned that in mid-nineteenth century London, Billingsgate Market saw 500 million sold a year. This works out at 185 oysters per year per Greater Londoner – man, woman and child; we currently eat less than one per person per year in the UK.

If you’d like to know more I’d recommend the little-known oyster Bible, Robert Neild’s The English, The French and the Oyster, the source of some of the facts and quotations in this post and generally a remarkable compendium of just about everything you’d care to know about the creature and its differing treatment at the hands of the two nations (the French put us to shame). It’s sadly out of print so if you see a copy snap it up – you might start here.

13 thoughts on “Dabbler Soup – The English, The French and The Oyster”