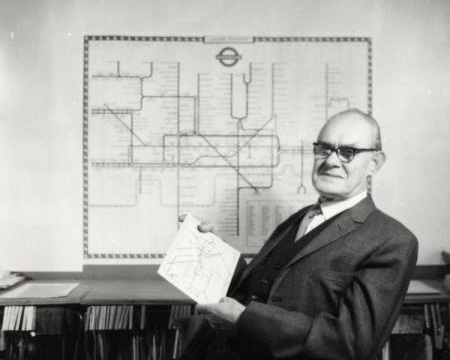 Some, like Mozart or Sid Waddell, are born as geniuses. Others have genius thrust upon them, in the form of a single brilliant, radical idea. And the very best sort of brilliant, radical idea is the one that appears so obvious that it’s hard to believe that nobody had thought of it before. Henry (‘Harry’) Charles Beck (1902-1974) was the recipient of such a stroke of genius, for he was the man who made the Tube comprehensible.

The first underground line in London was the Metropolitan Railway, running between Paddington and Farringdon Street via King’s Cross. It opened in January 1863 and within a few months was carrying over 26,000 passengers a day. The Hammersmith and City Railway was opened the following year and by the early 20th Century there were six independent, rival operators running different underground lines. But the lack of integration caused all sorts of bother for commuters and in 1908 the operators attempted to boost passenger numbers by jointly presenting themselves as ‘the Underground’ and bringing out a free publicity map of the ‘network’. 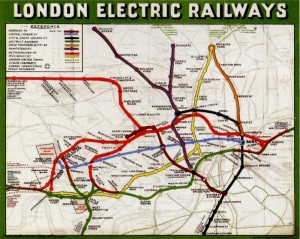 Geographically accurate, beautifully drawn… and a bloody headache, especially in Central London, where the stations are crammed together much more closely than in the outer regions. This 1922 map, exquisitely rendered by graphic artist MacDonald Gill, suffers from the same problems: 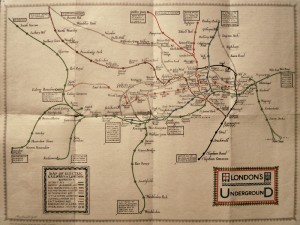 In the 1920s Beck was working as an engineering draftsman at the London Underground Signals Office. His great insight was that passengers didn’t really give two hoots about geographical accuracy, merely how to get from one station to another, and where to change. And he used the skills he’d developed in drawing electrical diagrams to conceive the idea of the simple ‘circuit’-style design. All of this he did in his spare time – in other words, he Dabbled the Tube map into being.

He submitted the idea to the London Underground in 1931, but it was initially rejected for being too radical and for failing to indicate the distances between stations. But a successful trial run of 500 maps was eventually printed, and an instantly-popular full publication of 700,000 copies was introduced in 1933. It looked like this: 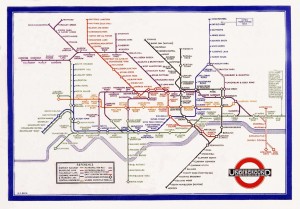 Beck continued to work on updates of the map as a freelance, but he faced competition from rival mapmakers Harold Hutchison and Paul Garbutt (a Nick Park film is just waiting to be made about the three obsessives and the ‘map wars’ isn’t it?)

Beck’s maps and the modern versions are design classics – beautiful as well as practical (or perhaps the beauty lies in the simple practicality?) and have been copied around the world – but not, alas, closely enough by the French. Observe the Paris Metro map, with its nauseating hexagons and unwise geographical approximations. Is this a rare instance of the French being too fixated on the real? The French, lovers of the abstract and the ephemeral, fail to create something useful by attempting to represent reality. The down-to-earth British, on the other hand, embrace the abstract to create something practical. We might have to consult Dr Dylan Trigg on that one.

Incidentally, one interesting consequence of Beck’s genius  is the effect of his map on the ‘psychogeography’ of London. Visitors and even locals who primarily get around by Tube can have a completely distorted view of the layout of the capital. It’s common for tourists to make complicated journeys by Tube which would take no time at all on foot.  This is what the Tube map would look like if it represented physical reality: 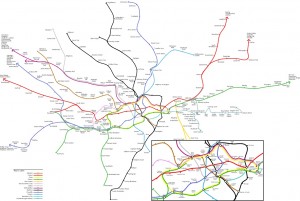 And here you can watch Beck’s 1933 map morph into a modern map and a geographically accurate one.