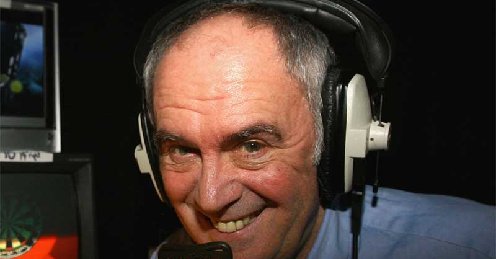 For years hence there will be gnarled Geordies huddled over schooners of broon and Red Bull, claiming they were there in the auditorium when Sid Waddell uttered the immortal phrase: His eyes are bulging like the belly of a hungry chaffinch.*

And their wide-eyed children’s children will be perched on their knees, demanding that Grandpa once again tell the story of how Waddell came to say: That was like throwing three pickled onions into a thimble!

Nobody has said more great things than Sid Waddell, nobody! Not even Shakespeare. Actually that’s just the sort of thing that Sid Waddell would say, only he’d put it something like: “Sid Waddell’s got so many one-liners that even Shakespeare in his pomp would run a mile in high heels rather than face him in a quip-off.”

Martin Amis once argued that it was the universe’s sick joke that Shakespeare, literature’s greatest genius, should have been a playwright, since writing plays is the most primitive of the scribe’s art forms (having to worry about just dialogue and plot, the easiest bits of novel-writing). How much sicker a joke then, that Sid Waddell should have given his gifts to darts commentary. But what gifts they are! 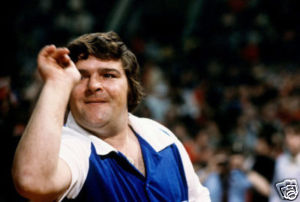 This is the man who said of the pictured arrow-thrower, Jocky Wilson…What an athlete. This is a man not afraid to claim that Darts players are probably a lot fitter than most footballers in overall body strength. (Though he has realistic insights into these athletes’ training methods: Big Cliff Lazarenko’s idea of exercise is sitting in a room with the windows open taking the lid off something cool and fizzy.)

Sure he could do the straight-up gag (There’s only one word for that – magic darts! or Keith Deller’s not just an underdog, he’s an under-puppy!) but Waddell is incapable of cliché: his similes enter your brain, leave the merest trace of sense, then depart. His metaphors thrill and bewilder: His physiognomy is that of a weeping Madonna. Or His face is sagging with tension. Or Under that heart of stone beat muscles of pure flint. Or yet,  He’s like D’Artagnan at the scissor factory.

Like Dr Dolittle, Waddell has mastered the animal kingdom: He’s about as predictable as a wasp on speed; It’s like trying to pin down a kangaroo on a trampoline; and He looks about as happy as a penguin in a microwave.

He is not necessarily given to understatement, however. There hasn’t been this much excitement since the Romans fed the Christians to the Lions; If we’d had Phil Taylor at Hastings against the Normans, they’d have gone home; Steve Beaton, he’s not Adonis, he’s THE donis.

Debate about which is the single greatest ever Waddellism is fierce, for there is much competition. Many plump for the hungry chaffinch. But there’s an awful strong case for: When Alexander of Macedonia was 33, he cried salt tears because there were no more worlds to conquer… Eric Bristow’s only 27.

We’re entering the realms of exceptional genius here. Who could argue with: The atmosphere is so tense, if Elvis walked in, with a portion of chips…you could hear the vinegar sizzle on them!

But I think that my choice, for its sheer elegance of construction, for its exquisite truth in miniature, must be the undeniable: The pendulum is swinging back and forth like a metronome.

There’s only one word for that: magic commentary.