Peter Kosminsky’s four-part drama The Promise reached the half-way mark on Sunday (if you missed them, you can watch the first two episodes on Channel 4 OD). Eight years in the making and filmed entirely in Israel and the Occupied Palestinian Territories (not the easiest places to work), each episode is a 100-minute film in itself and vividly captures the violent turmoil that characterised the final years of the British mandate in Palestine. The Promise also attempts to link events of sixty years ago with today’s bloody stalemate.

Kosminsky runs two stories in parallel, switching between them intermittently. The first begins in modern day Britain, with naïve 18-year old Erin (Claire Foy) in her dying grandfather’s house stumbling upon his diary chronicling his time as a British sergeant in post-war Palestine. She then leaves for Israel, diary in hand, to accompany her college friend Eliza who is about to start her military service. Whilst there she begins to retrace the places, events and people her grandfather had written about and seeks to find out why his experiences in Palestine left him so bitter and scarred for the remainder of his life.

We also find ourselves in the 1940s, following Erin’s grandfather Len, played brilliantly by Christian Cooke. We see him first liberating the concentration camps of Europe and then in Palestine as part of the unsuccessful British effort to reconcile the completing claims of the Zionists and the indigenous Arab population. Having witnessed the horrors of the Holocaust, he is initially sympathetic to the Zionist cause and the plight of the refugees flooding in from Europe. But his feelings begin to change as he and his fellow British soldiers are targeted by Jewish militants intent on removing any barriers to statehood and unlimited Jewish immigration.

Kosminsky has chosen a hot topic for his drama. The 1948 war and the events leading up to the birth of the Jewish state are the subject of bitter debate inside Israel. For many Israelis and the state’s vocal supporters in the West, any depiction of Israel as anything but a victim is quickly rounded upon. Israel’s birth in 1948 was nothing short of miraculous, they argue, and came about despite the best efforts of the British and the entire Arab world to prevent it.

This rather simplistic version of events is now challenged by historians who have replaced propaganda with history pieced together from documents written at the time. They do not question the bravery and determination of the Zionists, but they argue that they were fighting an Arab enemy that was weak and divided. They also point out that the Jewish state would never have come into being about had it not been for the British occupation of Palestine. Most controversially, they claim that the Jewish forces expelled hundreds of thousands of Palestinians from their towns and villages during the 1948 war, to ensure that their nascent state had a clear Jewish majority. The descendants of these Palestinian Arabs still live in refugee camps across the region today.

Kosminsky does not shy away from tackling complex and controversial issues head on and I look forward to seeing how he treats the escalating conflict in the final two episodes. The history of the Arab Israeli conflict is far more complicated than protagonists on both sides would often have us believe. The Promise presents its moral complexities in a compelling way and by linking the present with the past, gives the viewer a sense of how difficult (or impossible) it is to bring Palestinians and Israelis together in a lasting peace.

Politics aside, this is great Sunday night entertainment, if a little unrelenting. I’m not sure how much it cost, but I’d guess a small fortune. So far I think it has been worth every penny. 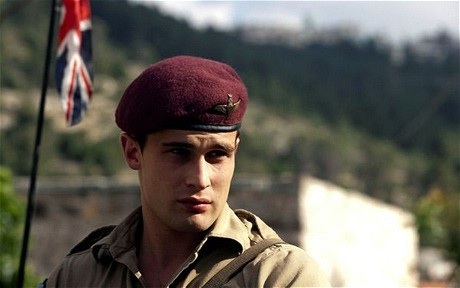