Thomas Hardy, as a young man, was tasked with a job that was extraordinarily well matched to his morbidly repining tendencies. Whilst working as a trainee architect in London, he’d overseen the disinterment and removal of bodies from St Pancras Churchyard. A plaque commemorates his task:

During the 1860s the Midland Railwayline was being built over part of the original St. Pancras Churchyard. Blomfield [Hardy’s boss] was commissioned by the Bishop of London to supervise the proper exhumation of human remains and dismantling of tombs. He passed this unenviable task to his protegé Thomas Hardy in c.l865. Hardy would have spent many hours in St. Pancras Churchyard during the construction of the railway, overseeing the careful removal of bodies and tombs from the land on which the railway was being built.

The incident came to be memorialised in Hardyesque fashion. Headstones cleared from the churchyard were stacked in an undisturbed area and a tree has grown up through them. It’s an ash known as The Hardy Tree (the photo is from this excellent site): 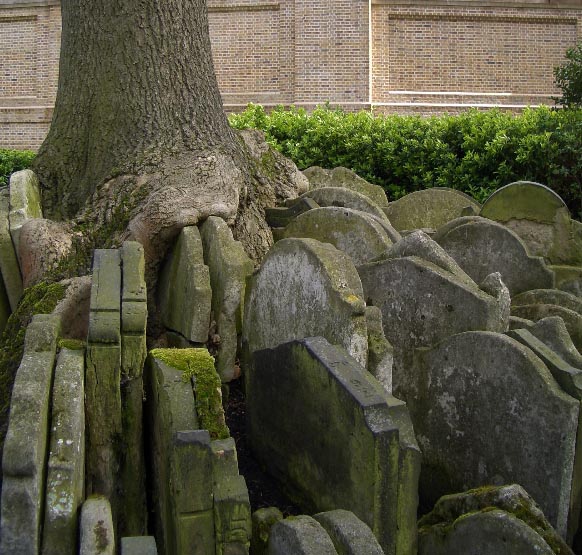 Every aspect of the story – from the obliterations of progress to the ironies unknowingly dispensed by nature – seems to contain the sort of detail and theme Hardy loved to dwell on, cheerfully cheerless. It may have been an inspiration behind a poem, The Levelled Churchyard, though I feel sure it influenced his imagination in other ways. How could it not?

Hardy would almost certainly not have known about the tree; but he did know ones that did similar work, as we see here in The Transformations:

Portion of this yew
Is a man my grandsire knew,
Bosomed here at its foot:
This branch may be his wife,
A ruddy human life
Now turned to a green shoot.

These grasses must be made
Of her who often prayed,
Last century, for repose;
And the fair girl long ago
Whom I often tried to know
May be entering this rose.

So, they are not underground,
But as nerves and veins abound
In the growths of upper air,
And they feel the sun and rain,
And the energy again
That made them what they were!

I wandered through St Pancras Churchyard in the course of a walk around my part of London (I’m walking a lot at the moment). Hardy’s task and his Tree seemed emblematic of much I’d seen. London has constantly experienced disturbance to its fabric, new things have always sprouted up in the midst of the old (‘Portion of this yew / Is a man my grandsire knew…’).

The whole Kings Cross and St Pancras area is experiencing one of these characteristic irruptions. The extent of development has to be seen to be believed. However, the sensitivity displayed to what’s already on the site is admirable: surviving structures are being incorporated, sometimes very cleverly, into a contemporary transport hub.

The amazing new St Pancras is now complete (the Hotel is opening next month and I can’t wait to have a nose around). A refurbished King’s Cross station looks as if it will be at least as big a treat: at last, its Grade I listing is becoming immediately understandable. (And just down the road, old Euston is still mourned…).

But in this particular bit of London it’s not just the buildings and landscapes that persist, if often transformed. One structure in St Pancras Churchyard has had an unexpected influence: the centrepiece of Sir John Soane‘s family tomb was the inspiration for Giles Gilbert Scott’s red telephone box.

St Pancras Churchyard is also the burial place of John Polidori, author of The Vampyre, which founded the literary genre. It’s already a place of pilgrimage for feminists and fans of the Romantic (Mary Wollstonecraft’s grave is there, a meeting place for her daughter, the future Mary Shelley, and Percy Bysshe*). I wonder whether it’s now on the itinerary of fans of Twilight? If more teenage vampire fans knew what he looked like he might get some visitors: 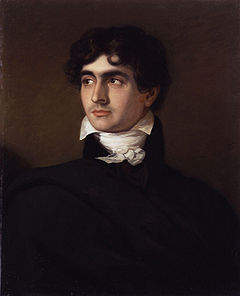 There’s clearly more than one species of undead to be encountered in London (‘they are not underground / But as nerves and veins abound / In the growths of upper air…’). Sometimes one is tempted to feel that to live in London is to declare, like Hardy, ‘I Have Lived with Shades‘.

* The Shelleys knew Polidori through Byron, whose physician he was. The Vampyre was written alongside Mary Shelley’s Frankenstein following a wet but productive few days spent in a villa on Lake Geneva during the climatically awful summer of 1816.

10 thoughts on “Dabbler Country: St Pancras Churchyard ‘They are not underground’”