A cream bun to Jonathan Law this week, but well done also to Ian Russell, Worm and newcomer Grant who also twigged the answer by the looks of it. Click continue for the full answer. 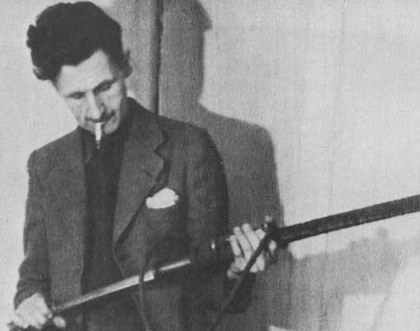 What links a former Prime Minister to a Dickens tale, a Lancashire tourist attraction, Gracie Fields, the actresses Scarlett Johansson and Diana Dors, and something a sperm whale is good at avoiding?

And the answer is… George Orwell!

The Prime Minister I have in mind is Tony Blair, who shares a surname with this week’s link. Eric Arthur Blair first adopted his pen name in 1933, while writing for the New Adelphi. He chose a pen name that reflected his affection for England and its countryside: George being the patron saint of England (and George V its then-monarch), and the River Orwell in Suffolk being one of his favourites spots.

The rest of the clues all reference Orwell novels.

The Dickens tale is the Tale of Two Cities – the two cities in question being Paris and London, where Orwell addressed the business of being Down and Out in 1933.

The Road to Wigan Pier was written four years later, in 1937. Here’s an extract:

“I remember a winter afternoon in the dreadful environs of Wigan. All round was the lunar landscape of slag-heaps, and to the north, through the passes, as it were, between the mountains of slag, you could see the factory chimneys sending out their plumes of smoke. The canal path was a mixture of cinders and frozen mud, criss-crossed by the imprints of innumerable clogs, and all round, as far as the slag-heaps in the distance, stretched the ‘flashes’ — pools of stagnant water that had seeped into the hollows caused by the subsidence of ancient pits. It was horribly cold. The ‘flashes’ were covered with ice the colour of raw umber, the bargemen were muffled to the eyes in sacks, the lock gates wore beards of ice. It seemed a world from which vegetation had been banished; nothing existed except smoke, shale, ice, mud, ashes, and foul water.”

Despite which, Wigan Pier remains a Lancashire tourist attraction. Wigan Pier Experience’s manager, Carole Tyldesley, said “In the end George Orwell has proved to be a strong marketing tool.”

Just down the road from Wigan you’ll find the town of Rochdale, famous for its magnificent town hall, Bill Oddie and Gracie Fields. Her song The Biggest Aspidistra in the World reflected the fact that the houseplant – massively popular in the Victorian era – had become a joke in the 20th Century. As did the title of Orwell’s 1936 novel Keep the Aspidistra Flying.

The Orwell connection with Scarlett Johansson and Diana Dors is simply that the former was born, and the latter died, in 1984.

Finally, with an unequalled ability to dive to depths of 3km and remain submerged for 90 minutes at a time, a sperm whale is exceptionally good at avoiding Coming Up for Air. Boom boom!

5 thoughts on “The Dabbler’s Round Blogworld Quiz #12: The solution”