One Thursday I got the willies. These particular willies were given to me by the Life Mask of actress Sarah Siddons adorning the wall outside the Monk’s Parlour in the basement of Sir John Soane’s House Museum, Lincoln’s Inn Fields, London.

You may wonder how I came to be there, in the basement of that house in that famous public square once stalked by Tulkinghorn and scene of incompetent executioner Jack Ketch’s botched beheading of William Russell, on that Thursday, with the willies. The answer is that I took the Central Line to Holborn and walked, having been urged to visit the Museum by two London bloggers who between them know all there is to know about the great city’s countless hidden gems.

I lurched round the Soane Museum in hungover bewilderment. It is almost certainly The Best House in the World. I would like a Shakespeare Recess on my own staircase; on Soane’s, a rather lobotomised-looking Bard peers down at you from a shelf, reminding you that you are not a genius and have achieved nothing of lasting value as you ascend with guidebook and headache into the sickly glare of Turner’s Patent Yellow, which is the colour of the walls, curtains and furniture in the South Drawing Room.

Sir John Soane designed the Bank of England, amongst other notable buildings. His house in Lincoln’s Inn Fields is preserved as he left it two centuries ago, donated to the nation partly as punishment to his ghastly, ingrate sons. You can tell it’s old because all the items of furniture point at each other instead of at a television. A brilliant architect Soane was; a minimalist he was not. His rooms are stuffed to bursting with classical fragments and medieval masonry and other collections. He used mirrors and light with terrible cunning. I will not even attempt to describe the Breakfast Parlour, which plays architectural tricks with scooped-out domes and more than a hundred pieces of mirror. No picture could capture it; you’ll have to go and see it for yourself. And if you sidle through Soane’s dressing room and turn right you enter a mind-bogglingly condensed Picture Room, which happens, almost by-the-bye, to contain A Rakes Progress and An Election by Hogarth.

Soane’s real toys are in the basement. The house is the physical manifestation of the mind of, if not a mad genius, then at the very least an eccentric talent. He once held a three day party to celebrate the acquisition of the sarcophagus of the Pharoah Seti I. That’s in the Sepulchral Chamber, along with lots of other morbid bric-a-brac. The Monk’s Parlour is an unsettling set of rooms built for the use of one Padre Giovanni, a holy man entirely of Soane’s imagination whose ‘grave’ is in the yard amongst the ruins of his fictional monastery. The headstone is engraved with the words “Alas! Poor Fanny!” (Fanny being the name of a Soane pet dog, whose corpse really is buried there). 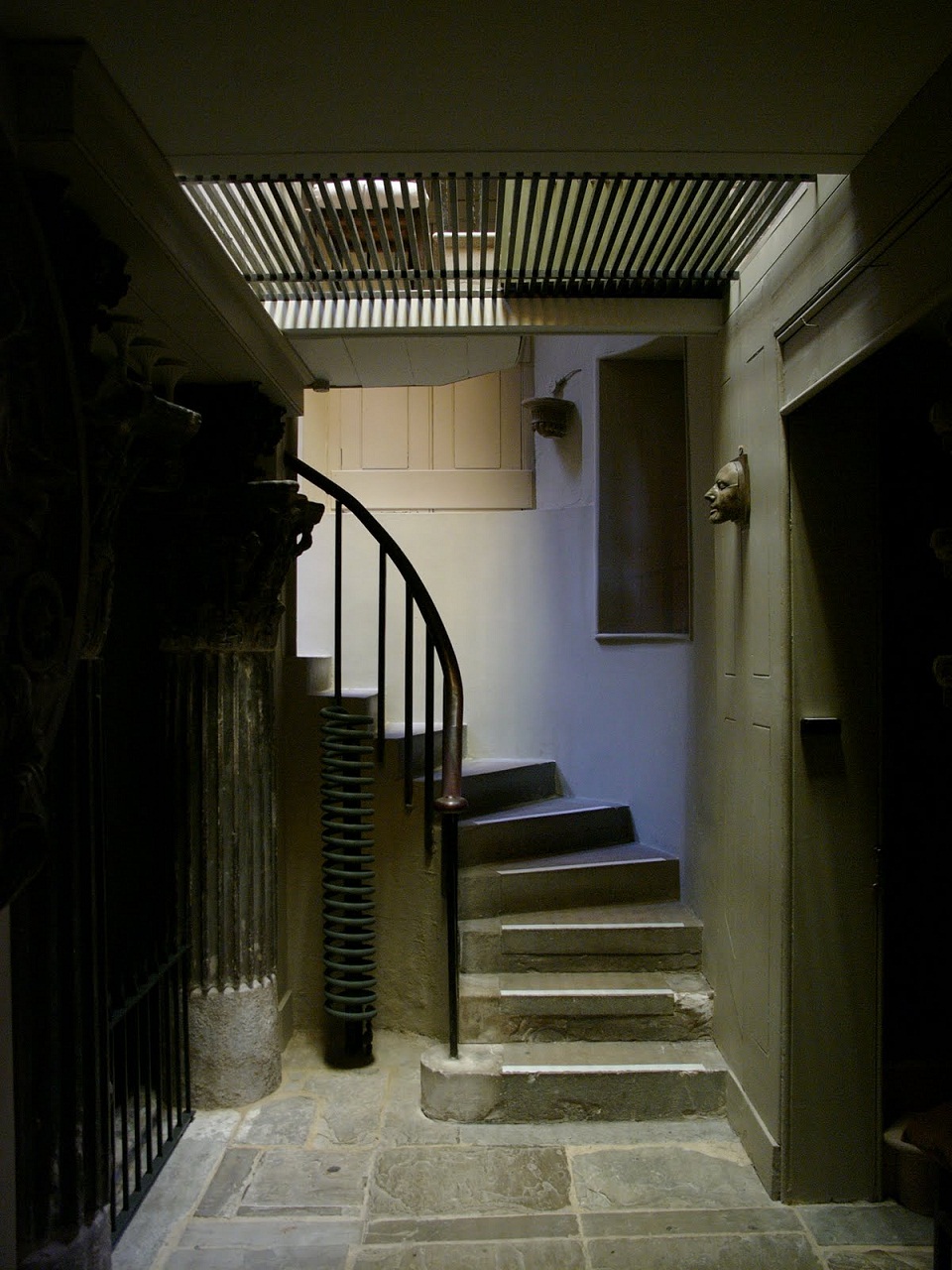 Nobody knows how Soane acquired the Life Mask of the actress Sarah Siddons. Her face – sinister, pained, masculine or melancholy, depending on the angle – bursts ghost-like from the wall (on the right of the above picture); or perhaps is frozen into it like Han Solo at the end of The Empire Strikes Back. You should go and see this Life Mask, next time you’re in London. It will give you the willies. Entry to the Soane Museum is free though you should donate at least a fiver to keep this remarkable place going.

Pictures courtesy of the Sir John Soane’s House Museum. Please do not copy without permission. Thanks in particular to the extremely helpful Helen Dorey, who identified the Life Mask for me and emailed the pic.