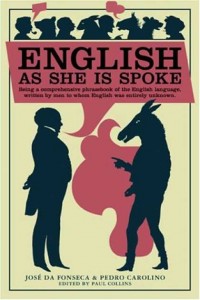 Connoisseurs of unintentional comedy should enjoy English as she is spoke. Created in 1885 by José da Fonseca and Pedro Carolino, it was intended as a Portugese-English conversational guide. However, the Portugese authors chose to go about creating it in an unusual manner. Having already created a Portuguese-French phrasebook some years earlier, they decided to translate it into a Portugese-English phrasebook. Unfortunately, all they had to go on regarding the English side of things, was a French-English dictionary, creating a sort of ‘Chinese Whisper’ effect.

The results are wonderful. We are introduced to such handy phrases as: “Have you forgeted me?” and “They fight one’s selfs together“. Not to mention the indispensable “These apricots and these peaches make me and to come water in the mouth.”

We learn that an English gentleman, perhaps a “Porkshop-keeper” by trade, might get up, put his “buskins” on “the fat of his leg”, and go to visit his “quater-grandmother”, all the while pondering to himself the truth of the phrase: “A horse baared don’t look him the tooth.”

We are also given some typical English dialogue:

To Inform One’self of a Person:
How is that gentilman who you did speak by and by?
Is a German.
I did think him Englishman.
He is of the Saxony side.
He speak the French very well.
Tough he is German, he speak so much well italyan, french, spanish and english, that among the Italyans, they believe him Italyan, he speak the frenche as the Frenches himselves. The Spanishesmen believe him Spanishing, and the Englishes, Englishman. It is difficult to enjoy well so much several languages.

Mark Twain said of the book: “Nobody can add to the absurdity of this book, nobody can imitate it successfully, nobody can hope to produce its fellow; it is perfect”, adding:

It is not a fraud who speaks in the following paragraph of the author’s Preface, but a good man, an honest man, a man whose conscience is at rest, a man who believes he has done a high and worthy work for his nation and his generation, and is well pleased with his performance: “We expect then, who the little book (for the care what we wrote him, and for her typographical correction) that may be worth the acceptation of the studious persons, and especially of the Youth, at which we dedicate him particularly.”

The full text is available here.

4 thoughts on “English as she is spoke”