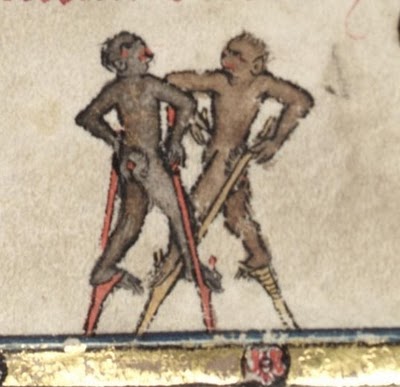 Medieval illuminated manuscripts sometimes feature animals capering irreverently around the margins, such as the ones above and below. I discovered whilst reading Peter Ackroyd’s fascinating Albion: The Origins of the English Imagination that these doodles are quite excellently called ‘babooneries’. I also learnt that, at least according to Nikolaus Pevsner, they originated in England – a satirical streak and an interest in the potential of animals to amuse run deep. 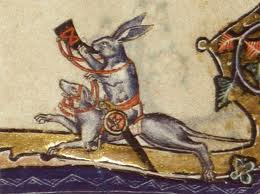 Baboonery is such a remarkably good word it seems a shame to have almost completely lost it. It could still have a use – perhaps to describe any form of marginal but amusing animal activity. We’re not short of examples as the English tradition of baboonery persists even if we’ve forgotten the word for it. I can think of a few modern-day examples…

The most literal form of baboonery would include potentially satirical capers conducted by animals in the presence of people engaged in some terribly serious activity. For instance, Butch enthusiastically licking his nethers on the sitting room rug whilst an intense discussion is being conducted over his head on the impact of government spending cuts would be a baboonery.

The use of animals in adverts is a baboonery: they are there to divert and amuse whilst sitting in the margins of the TV programmes. Such baboonery by real creatures reached something of a peak with the PG Tips chimps and the Andrex labrador puppy. Presumably, though, worries about animal cruelty have led to their replacement by puppets. I imagine the confusingly Russian meerkat Aleksandr Orlov is probably the most commercially successful of these; I leave it to you to judge whether he’s a success otherwise. On the other hand, an undoubtedly huge critical success was enjoyed by Jonny Vegas’s Monkey, even as the brand he initially advertised, the ill-fated ITV Digital, crashed and burned. Indeed, he made such an impression that he stepped out of the wreckage and went on to take simian/primate endorsements full circle by promoting good old PG Tips.

Animals can also sometimes feature to great effect in marginal, surreal and weird comedy. There are a few examples but the award for the most creative – and bafflingly funny – use of animals by an edgy comic troupe has to go to The Mighty Boosh. Their Crack Fox and once-seen-never-forgotten Mod Wolves should be mentioned:

Then there are the examples of baboonery that become so successful they no longer sit in the margins. Probably, the most successful piece of transcendent baboonery in modern times was undertaken by Roland Rat. A truly marginal figure compared to the galaxy of news stars who founded and originally anchored TV-am (Michael Parkinson, David Frost, Angela Rippon, Anna Ford, Robert Key), he went on to become the main attraction. He was famously described as a rare example of a rat joining a sinking ship; he went on to save it, taking viewing figures from 100,000 to 1.8m. From baboonery to stardom in his own right.

On film, he even looks like a baboon (arms strangely too long for his body) and he has the manic, glaring face of a gargoyle. His sin was not, perhaps, to have been radically new but disturbingly old – an ancient imp, an old spirit of native anarchy come back to haunt the English with the terrors of a half-suppressed and irrational past.

Who? John Lydon aka Johnny Rotten of The Sex Pistols.

So there you go. Do try to work the word into a conversation whenever you can. 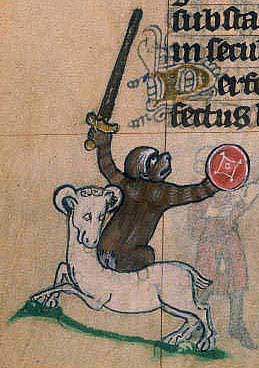