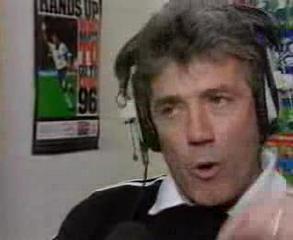 Today’s Row Z feature is provided by James Hamilton, a writer and former sports psychotherapist who blogs at More Than Mind Games. For his first Dabble, James examines a question we must all have pondered, shaking our heads in disbelief at the post-match witterings of coaches from  Ron Atkinson to Steve Bruce, namely: Why aren’t our football managers more intelligent?

“I’ve done lots of interviews with overseas players and managers and invariably they were always smarter and brighter and more analytical than their English peers.” (John Sinnott, BBC Sport).

Instead of choosing management, the brightest football people in England have taken charge of the sport’s new support industries – reporting, broadcasting, stadium development, market expansion, catering. As a result, England’s Premier League is the richest in the world. Our international team lags behind.

Of course, the English, a nation with great schools and universities, a vast publishing and broadcasting industry, a plethora of Nobel Prizes and Radio 4, don’t go to football to be intelligent. They go to football to take a break from intelligence, and anyway, as scholar-cricketer Ed Smith has said, “A lot of people in sport pretend things are very easy.” Football is a complex game, but these are complexities that, as a nation, the English do not care to contemplate.

There is a history in the game of scorn for intelligence, even intelligence of a very English kind. Walter Winterbottom, pioneer coach and England’s first manager, didn’t impress Bobby Charlton. “He didn’t know how to handle players, how to talk to them. He spoke too well, too precisely, like a schoolmaster. Walter had this impeccable accent, whereas football’s a poor man’s game: players expect to be sworn at. A bit of industrial language”.

The arrival of state secondary education was the crucial turning point in the nature of football and football management. In 1901, the football Maximum Wage of £4 per week was enough to allow players to save for their education, and a surprising number were able to move on from playing into the church, the law and medicine. It was enough to persuade men who were already in white collar jobs to go professional, like Cunard and Everton’s John Cameron.

By the time Bobby Charlton was at grammar school, white collar opportunities for working class boys had expanded. Footballing wages no longer impressed. Intelligent, talented young sportsmen were being encouraged away from the playing field and into white collar careers. Brian Clough’s captain, John McGovern, was bound for university and a very different kind of life when Old Big ‘Ead intervened.

This educational creaming-off of players had a severe knock-on effect on management, because by the 1950s, it was assumed almost without question that a manager would have played, preferably at the top level. Bill Shankly believed that a good coach needed first to have been a good player.

Shankly was a Scot, but his English contemporaries – Don Revie, Alf Ramsey, Malcolm Allison, Bill Nicholson, Bobby Robson, Brian Clough, and Terry Venables – were the last who could cite missing out on education after age 14 as a shared experience. Every last one of these articulate, passionate, original men could have counted on a university place under modern conditions. Which is where you might look for the men who would otherwise have been their successors, for, pace Roy Hodgson, they have had no successors.