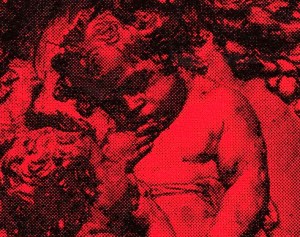 Watching last week’s TV coverage of the service at St Paul’s Cathedral commemorating the seventieth anniversary of the Blitz I caught a glimpse of Mark Alexander’s The Red Mannheim (detail above); I can’t think of many greater privileges for an artist. Its presence seemed particularly resonant given the nature of the work, which was reviewed by me here and by the incomparable Fugitive Ink here.

For those who would like to learn more about this remarkable painter, an interview with him has just been posted online at his new website. It was conducted by poet, critic, novelist, Oxford don and friend of Mark’s, Craig Raine, for his arts magazine Areté.

It’s entitled Lives of the Artist and most of it is concerned with those lives which preceded the art: as a schoolboy, silversmith, factory worker, engineer, English teacher, traveller, and Oxford scholar. It’s entertaining throughout and in parts very funny. I found the accounts of engineering particularly interesting as it’s something I know next to nothing about. However, I can’t say it seems much less arcane now than it did before.

You may also find some aspects of the interview fairly unlikely but I can assure you it’s a true account, if in places incomplete.

5 thoughts on “Lives of the artist”