‘A Vicious Circle’ by Natalie Ascencios

Misti Traya pays tribute to  some of America’s finest wits – or alternatively, as Dorothy Parker once said, just ‘a bunch of loudmouths showing off’…

In 1919, a group of writers lunched at the Algonquin Hotel on West 44th Street in Manhattan. The purpose of their gathering was to roast their friend, Sergeant Alexander Woolcott, theatre critic for The New York Times. Woolcott, who was known for being as fat as he was mean, had been lured to hotel with the promise of an excellent pastry chef. Having fought in World War I, Woolcott famously started many a story with “When I was in the theatre of war. . . “ One might imagine Woolcott had never felt so under the gun as he did that afternoon, but he loved it. He loved it so much that what started as a party in the Pergola Room turned into a 10 year lunch in the main dining room.

In the Roaring 20s they were roaring with laughter at everyone around them, including themselves. They cut ribbons of each other with their razor sharp remarks, but were also full of mutual admiration. They quoted each other freely in their columns. When someone made a pompous remark, the table would rise and bow to the speaker. They really were a bunch of characters.

That said, allow me to introduce the dramatis personae:

Sergeant Alexander Woolcott – He became the ringleader and was known for being witty in a cruel way. Forced to sit through a long-winded story he said, “Excuse, my leg has gone to sleep. Do you mind if I join it?” As theatre critic for The New York Times, he was capable of helping people’s careers. A few of the unknowns he championed were Fred and Adele Astaire, the Marx Brothers, and ingenue Ruth Gordon. After Wall Street crashed he had a radio program called The Town Crier. 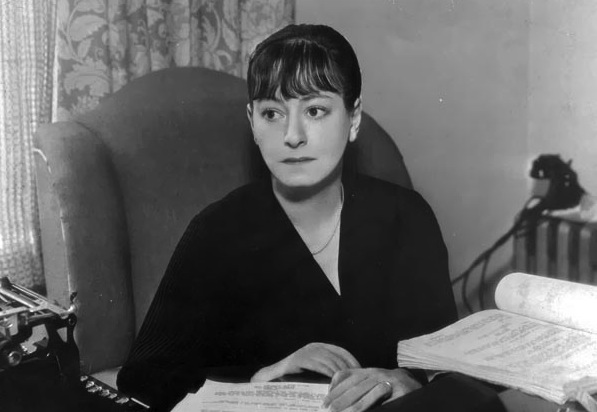 Dorothy Parker – Probably the most famous of the group. She was discovered by the editor of Vanity Fair, Frank Crowninshield, who had purchased a poem of hers. Later she was hired by Vogue as a caption writer where she wrote such famous copy as, “Brevity is the soul of lingerie said the petticoat to the chemise.” Her hazel and green eyes were as sad and deep as a spaniel’s. Her manner was reticent and self-effacing, but she had an enormous gift for turning vulnerability into verse. She wore horn-rimmed glasses that she quickly removed when anyone spoke to her and wrote that “Men seldom make passes at girls who wear glasses.” Once asked to use horticulture in a sentence, she responded “You can lead a whore to culture but you can’t make her think.”

Robert Benchley – He was a sweet natured humorist and Mrs. Parker’s best friend. He was also a Harvard graduate and known as The President of Chivalry. About sex with his wife he said “We tried it twice and it worked both times.” They had two children. When Mrs. Parker was fired from Vanity Fair for giving Ziegfeld’s wife a bad review, Mr. Benchley and Mr. Sherwood resigned in protest. All Three were soon snapped up by Time. Later, Mr. Benchley became a comic actor and film personality. Once on a rainy day, he ostensibly said, “Let’s get out of these wet clothes and into a dry martini.”

Robert E. Sherwood – As his surname name suggests, he was the tallest of the group standing six feet and seven inches. Like Mr. Benchley, he too was a Harvard graduate and close friend of Mrs. Parker. He fought with the Royal Highlanders of Canada during WWI. When he was wounded in action, he returned home and began a career in journalism. He won four Pulitzers and was one of the writers on the film adaptation of Daphne Du Maurier’s “Rebecca.”

Harold Ross – He founded The New Yorker in 1925 and financed the magazine with money he won playing poker with his Round Table buddies. He was a notorious smoker whose fingers were severely nicotine-stained.

George S. Kaufman – He was a journalist turned playwright who had a partnership for a while with Edna Ferber. Mr. Kaufman won two Pulitzers. He also went to Hollywood where he wrote films like “A Night at the Opera.” Once a studio executive pressed him about the deadline for a script insisting he wanted it Wednesday. Mr. Kaufman’s response was “Do you want it Wednesday or do you want it good?”

Edna Ferber – She and Mr. Kaufman wrote four hit plays together including “The Royal Family” and she won a Pulitzer in 1924 for “So Big.” Many of her books were adapted for film, “Giant” and “Show Boat” being the most notable. She was known for her sartorial sense and loved wearing tailored suits. Once a yet to be discovered Noel Coward said to her “Edna, You look almost like a man in that suit.” To which she replied “So do you Noel, so do you.”

Harpo Marx – The man who was later known as a silent clown on stage was a real talker at lunch. He loved playing croquet.

Franklin Pierce – He was the columnist of “Conning Tower” which ran in three newspapers. He was famous for using much of his friends’ thoughts in his pieces.

Heywood Broun – He was a drama critic and sports writer with a column in The New York Herald Tribune entitled, “Seems to Me” that ran for 20 years. He always carried a hip flask. 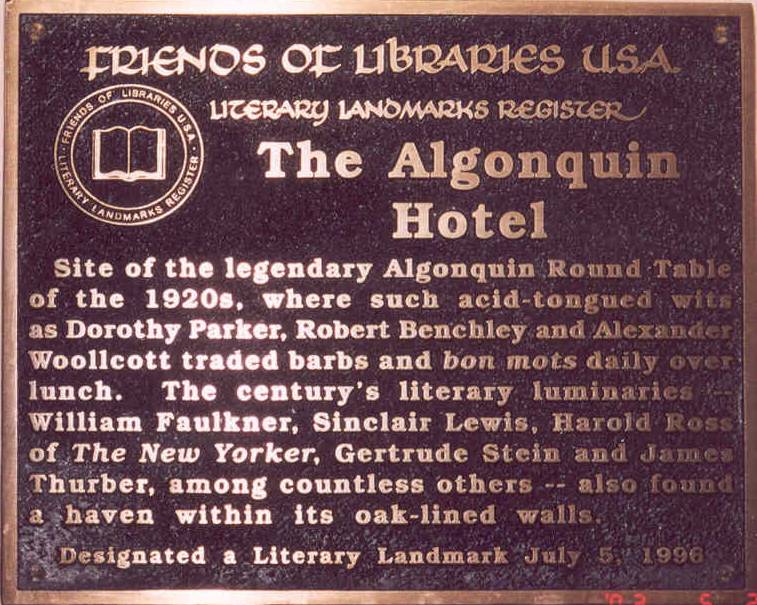 Years after the Round Table lunches ceased, Dorothy Parker said of her friends, “These were no giants. Think who was writing in those days—Lardner, Fitzgerald, Faulkner and Hemingway. Those were the real giants. The Round Table was just a lot of people telling jokes and telling each other how good they were. Just a bunch of loudmouths showing off, saving their gags for days, waiting for a chance to spring them. . . There was no truth in anything they said. It was the terrible day of the wisecrack, so there didn’t have to be any truth. . . The trouble with us is that we stayed young too long.”

4 thoughts on “The Algonquin Round Table: A real bunch of characters”