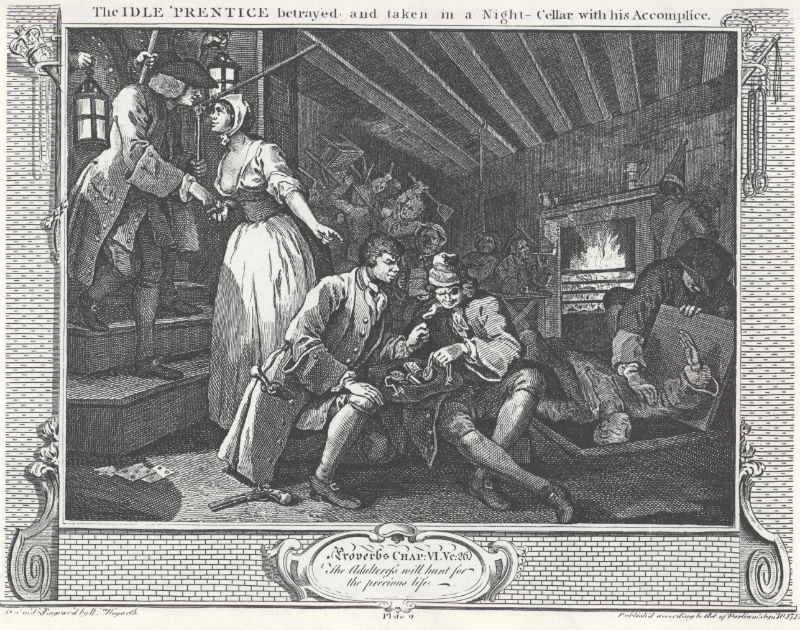 Continuing our re-run of his classic Dabbler series, The Slang Guide to London, Jonathon Green is seeking out Alsatia…

It’s gone: Water Lane’s gone, not even the name. Mitre Lane’s gone, buried beneath some pile of glass. Ram Alley’s called Hare Court and shelters My Learned Friends. Whitefriars Street, now irony runs unrestrained, houses the Office of Fair Trading. Must I repeat myself? It was not ever thus. Once these and more were Alsatia. Named for Alsace, another debatable, anomalous area. They wrote plays about it. They hated it. Mostly they feared it.

Look back. We have art. Plate IX of Hogarth’s Industry and Idleness (above). Here’s the ‘idle ‘prentice’ Tom Rakewell. Betrayed by his mistress Moll. He sits, debating the merits of a hatful of stolen trinkets with a patch-eyed accomplice; a soldier pisses against the wall, a dead (or just unconscious) body is tossed through a trapdoor, rogues enjoy a tussle, brandishing chairs aloft, a serving woman’s nose is masked (poxed perhaps? knocked, as they say, with a French faggot-stick). A constable crosses faithless Moll’s palm. The night-cellar existed: it is beneath Blood Bowl House, ‘down by the fishmonger’s, near Water-lane, Fleet-street’. Blood Bowl House had a history. Was it the countryman who had his pocket picked while he drank; when he complained, they warned him that the ‘blood bowl’ would catch the flow from his slit throat. That shut him up. One way or the other. Or was it the daily fights and monthly murders? This was Alsatia. In decline but round there it was still what you did.

Once there was a monastery, Whitefriars – Carmelites – owning everything from the Thames up to Fleet Street between the Temple and Whitefriars Street. Henry VIII saw it off but if god-bothering was a memory, it could still offer sanctuary. Freedom from arrest. Get out of jail free. Of course there was no jail. Debtors flocked in and after them real villains. They petitioned Elizabeth I, claiming exemption from City laws. She went for it; James I followed suit. The area expanded, took in the old Savoy palace, another victim of modernity.

The great houses, now decaying warrens, stayed up until they fell down and jerry-built replacements took their place. There was little light, but much rubbish and more sewage. You went in via a pub: one side on Fleet Street, the back door debouching onto no-man’s-land.

You didn’t go at all unless you had to. But once in, they couldn’t get you out. Macaulay wrote that ‘at any attempt to extradite a criminal, bullies with swords and cudgels, termagant hags with spits and broomsticks poured forth by the hundred and the intruder was fortunate if he escaped back to Fleet Street, hustled, stripped and jumped upon.’

Alsatia had a language. In 1688 Thomas Shadwell used it in a hit play: The Squire of Alsatia. The slang dictionaries embraced it: ‘Squire of Alsatia, a Man of Fortune, drawn in, cheated, and ruin’d by a Pack of poor, lowsy, spunging Fellows, that lived (formerly) in White-Fryars. The Squire, a Sir Timothy Treat-all; also a Sap-Pate.’

Shadwell drew ‘Alsatians’ and called them as they were: Cheatly, ‘who by reason of Debts dares not stir out of White-fryers’; Shamwell, ‘who being ruin’d by Cheatly, is made a Decoy-Duck for others’; Captain Hackum, ‘a Blockheaded Bully […] a cowardly, impudent, blustering Fellow; formerly a Serjeant in Flanders, run from his Colours, retreated into White-Fryers for a very small Debt; where by the Alsatians, he is dubb’d a Captain’; Scrapeall ‘a hypocritical, repeating, praying, psalm-singing, precise fellow, pretending to great piety.’ SRO and boffo box office; the play took £100 a night.

Printed editions of The Squire came with a canting glossary and the script is dense with it:  ready, cole and rhino for money; putt for one who is easily cheated; clear for very drunk; meggs for guineas; smelts for half-guineas; tatts and the doctor for false dice.

The young heir, snared by villainy’s glamour, meets his father. ‘Were you not educated like a Gentleman?’ asks papa. ‘No,’ says son, ‘like a Grasier, or a Butcher. If I had staid in the Country, I had never seen such a Nab, a rum Nab, such a modish Porker, such spruce and neat Accoutrements; here is a Tattle, here’s a Famble, and here’s the Cole, the Ready, the Rhino, the Darby: I have a lusty Cod, Old Prig, I’d have thee know, and am very Rhinocerical; here are Meggs and Smelts good store, Decusses and Georges; the Land is entail’d, and I will have my Snack of it while I am young, adad, I will. Hah!’ His father calls him a ‘most confirm’d Alsatian Rogue.’

Ten years later it was all over. Sanctuary was withdrawn. Maybe, some said, Shadwell’s play had cast too bright a light. It flickered on. In 1822 Walter Scott published The Fortunes of Nigel. The name still allowed for fictional heroes. Nigel insults Buckingham, James I’s favourite boy. He flees. . . to Alsatia. Scott tipped his hat to Shadwell, how could he not. Then digs in.

The brick buildings by which it was occupied, crowded closely on each other, […] riotous shouts, oaths, profane songs, and boisterous laughter, […] issued from the alehouses and taverns, which, as the signs indicated, were equal in number to all the other houses; and, that the full character of the place might be evident, several faded, tinselled and painted females, looked boldly at the strangers from their open lattices.

Thugs chatter: ‘Tour out,’ said the one ruffian to the other; ‘tour the bien mort twiring at the gentry cove!’ [Footnote: Look sharp. See how the girl is coquetting with the strange gallants!] ‘I smell a spy,’ replied the other, looking at Nigel. ‘Chalk him across the peepers with your cheery.’ [Footnote: Slash him over the eyes with your dagger.] ‘Bing avast, bing avast!’ replied his companion .’ [Footnore: ‘Run away’]. Scott checked his dictionaries, and maybe ‘Bing out bien Morts’ a canting song of 1612, but his Alsatia has no ‘doxie dell’ or young tart, who will ‘wap well for a win’ or offer good sex for a penny.

Thugs and villains never quit; no-go areas would last – St Giles, Jacob’s Island, Saffron Hill – but Alsatia was over. Ned Ward, publican and flaneur, inspected the corpse in 1705. Where now were the ‘Infernal Territories where Vice and Infamy were so long Protected, and Flourish’d without Reproof, to the great Shame and Scandal of a Christian Nation’? Gone now and gone then. Its streets were ‘so very thin of People, the Windows broke, and the Houses untenanted, as if the Plague, or some such like Judgment from Heaven, as well as Executions on Earth, had made a great Slaughter amongst the poor Inhabitants.’ He wouldn’t be much impressed now either. Who could be?