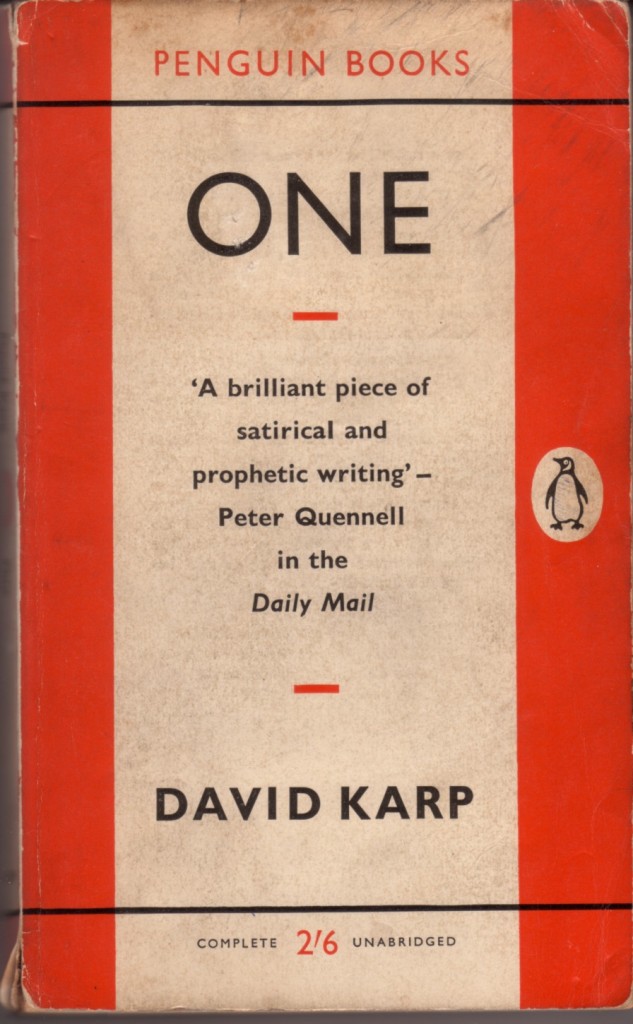 Steerforth discovers David Karp, a cerebral novelist whose name has unaccountably vanished from the literary canon…

Until I found this novel in the cavernous basement of Camilla’s Bookshop in Eastbourne, I had never heard of David Karp. I can’t remember why One caught my eye, but as soon as I read the blurb on the inside front cover, I was intrigued:

‘The publishers have bracketed this novel with Darkness at Noon, Nineteen Eighty-Four and Brave New World, which I at first thought presumptuous; but now, after reading it, I am inclined to agree.’ – Cyril Connolly

The rather worn copy on the shelf was priced £1, so I decided to trust Cyril Connolly and take a chance. I had reservations. If David Karp was that good, then why had I never come across his name in nearly twenty years of bookselling? I added One to my pile of unread books, only half expecting to ever get round to reading it.

I have just finished reading One and although I wouldn’t rate it as highly as Nineteen Eighty-Four, I was surprised at how good it was.

I think it would be safe to assume that Karp had read Orwell’s novel and was heavily influenced by it, as certain scenes in the book are strongly reminiscent of Winston Smith’s encounters with O’Brien. If that it is the case, it doesn’t diminish Karp’s narrative. However, if Karp hadn’t read Nineteen Eighty-Four, then it makes One even more remarkable.

To give you an idea of the novel, here is a brief extract:

‘Do you know how long you must stay here now?’

‘Only until you rid yourself of your heresies’

Never. Never. I can never do it.

‘You will or you will die here.’

Then let me die soon.

‘You will die when you must. But not for a long time.’

I will die sooner.

‘You will not. You will live out your life.’

I can’t do what you ask.

‘You must. Who told you you were brighter than your friends?’

My father, my mother, my brother, my teachers, everyone.

No they were right. I could see that.

‘They used the wrong measure of intelligence.’

They didn’t. They used the correct measure.

‘An intelligent man is a happy man, is he not?’

No, he is not. My father was intelligent, but he was not happy.

‘Your father was not intelligent. The aim of life is happiness. Without happiness a life is without meaning.’

The aim of life is reason. Without reason life is without meaning.

‘Would you rather be happy than rational?’

A lunatic can be happy without being rational. You are all lunatics. The moon will change its phase and your madness will pass as happiness will pass. The dark side of the moon is coming and with it your unhappiness. 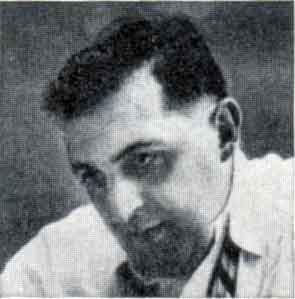 David Karp was born in New York City in 1922. In 1942 he joined the US Army and served in the Far East until 1946, when he left to continue his education. Karp wrote six novels in his 30s, but abandoned books for a screenwriting career, writing scripts for series including The Untouchables. Karp’s work in television was very successful and he won two Emmys.

I used to think that you could find anything on Google, but other than this brief outline, and a short obituary published in the NY Times after his death in 1999, there is very little information on the internet about David Karp.

To achieve that level of obscurity as a writer you normally have to be pretty crap, or piss off your publisher so much that they effectively kill off your career. One publisher allegedly did it to one of their authors – a moderately successful female crime writer – and I haven’t seen a book by her in 15 years.

Anyway, there’s no questioning Karp’s ability as a writer, so was he a bit of a tosser? Not if the following extract is anything to go by. It took me a long time to find this article and I apologise for the lengthy quote, but it’s a nice story:

Do you recall David Karp? Fine writer. Won a Guggenheim back in ’56. Nobody remembers that. Well, Karp got into TV writing and production when the paperback market went soft. He did some stuff for Playhouse 90 and The Untouchables. Won an Emmy, I’m pretty sure, for an episode of The Defenders.

Anyway, back in 1970 he adapted his own novel, Brotherhood of the Velvet, into a TV movie for Glen Ford. It was a conspiracy flick. A little cheesy but still ahead of its time. I was 10 years old when it broadcast and, for whatever reason, it made a big impression. So I wrote Karp a fan letter and, shockingly, he wrote back. Can you imagine that? He’s a big TV writer at this point and he takes the time to write to this pre-teen punk in a factory town back east. So we had a little correspondence going for a few months–I told him, I confessed, that I wanted to be a novelist. He sent me a mint copy of The Last Believers that I still have.

Well at some point I started writing him a letter and I got a little sidetracked and began rambling about an idea I had for a dramatic television series. I had gotten hold of a little pamphlet written by D.C. Fontana, I believe, that detailed, essentially, how to write a pitch. Useful little document. So in this letter to Karp, I started pitching this notion I’d been cradling for a year or so. This idea I’d been hatching on long winter walks home from school. It was just nuts, really an off-the-wall thing. But what happened was the letter ballooned into this 60-page monster. I had to mail it in a manuscript envelope, right? About two weeks go by and suddenly I’m mortified that I wrote this thing to Mr. Karp, that I embarrassed myself so profoundly to a flesh-and-blood writer. And I’m brooding over this shame one afternoon in the rocking chair of my yellow kitchen, pretending to read a Treasure Chest comic book. And my mother is at the stove, you know, making a meatloaf. And the phone rings. So Ma wipes off her hands on the dish towel and grabs the phone and talks for a second. Then she covers the receiver with her hand and looks at me suspiciously and says, “It’s a Mr. Karp for you.”

Can you imagine this?

I’m ten, eleven goddamn years old. I almost dropped to the floor. I started shaking my head to refuse the call. But my mother, a stickler for doing the right thing and being polite, insisted I talk to this man. I think she thought it was someone’s father or something. I remember this so clearly. So I take the phone and I sit down on the floor in the hallway and, terrified, I say hello. And Karp was just wonderful. Such a gentleman and quite funny. He said he’d read my series pitch and that he loved it and that he wanted to show it to some people. I swear to you, he even asked if I had representation. I didn’t even know what that meant.

So David Karp was not only a good writer, but a decent bloke too. If chaos theory is correct, then I hope that the tiny ripples of this blog will eventually grow into a proper Karp revival.

One is a very accomplished work of dystopian fiction and however derivative it may (or may not) be, it is far superior to many novels that are currently in print. Secondhand copies aren’t difficult to get hold of, but I would love to see this reissued by Penguin, in their Modern Classics series.