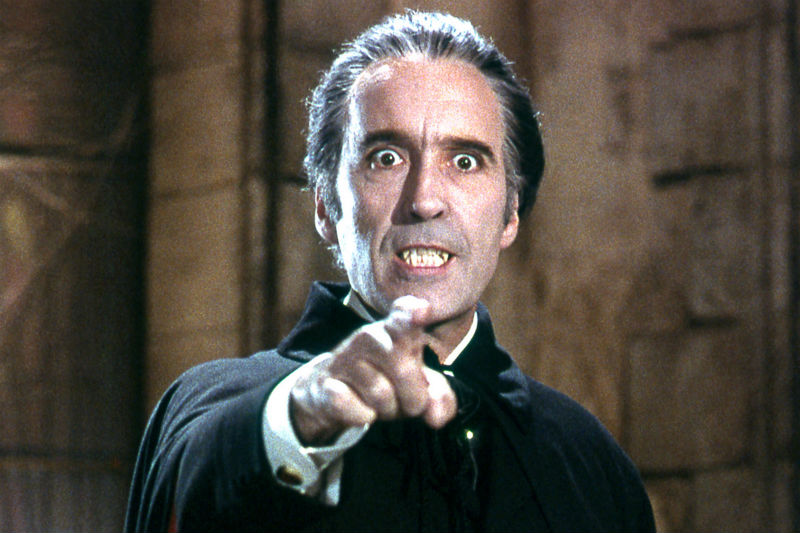 Gaw uncovers one of the secrets of a good obit: stick around, keep working…

Christopher Lee died a knight, lauded for a film career that extended from propping up a very poorly British industry to featuring in some of the most profitable film franchises in Hollywood history.

I don’t want to knock him as I really think his late success was wholly just and deserved and I’ll really miss him. But I think one has to admit longevity can be a great leg up in the obit stakes.

If he’d died before the first Lord of the Rings most people would be thinking of him as Britain’s Vincent Price (incidentally, they were born on the same day, May 27th – Ham Vampire Day, toasted by throwing a glass of tomato juice down your shirt front).

There weren’t many alternatives to vampire films for a 6’5” craggy-browed and sonorous British actor in the 60s and 70s. The Charlton Heston option wasn’t available: swords-and-sandals epics were beyond the resources of the British film industry.

When Lee first tried to crack Hollywood, in the late-1970s, he was well into his fifties. It was too late: the schlocky mould had been cast, the three nipples of Scaramanga (from The Man with the Golden Gun) not adding up to a breakout role. But those Dracula parts did have their compensations: good, predictable money, something not to be sniffed at for an actor.

He certainly applied himself, earning several Guinness World Records, including Most Connected Actor Living, Most Films With A Swordfight By An Actor and Tallest Actor In A Leading Role. Over his lifetime he must be a candidate for the hardest working screen actor: he appeared in around 300 films dating back to 1948.

However, only in recent years was he given the opportunity to play some properly Hestonian, noble-browed, be-gowned roles in epic movies: in the second Star Wars trilogy and most impressively in The Lord of the Rings and The Hobbit. Confirmation that he would have made a wonderful Moses.

What if Sir Christopher had died before all this at the respectably old age of eighty-five? The headlines would have told of a cultish reputation back in the day with mention of a modest OBE. Not what he deserved – and not just for his acting (see here).

There’s an encouraging lesson for us all there. If you’re lucky enough for your health not to let you down keep on trucking; good things can happen.

5 thoughts on “Christopher Lee and The Benefits of Being Undead”