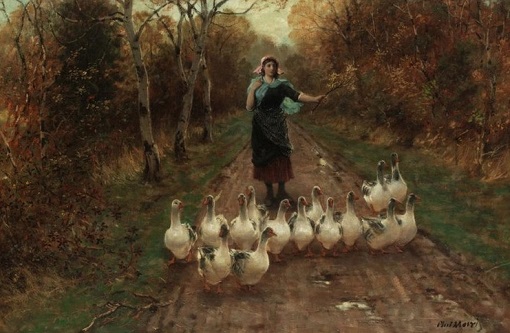 This coming Monday is Michaelmas, so you’ve still got time to get yourself a goose. Just make sure you don’t pick any blackberries afterwards. Professor Nick Groom explains….

September 29 is Michaelmas: the Feast of Michael and All Angels. It was also one of the four quarter days of the English business year, which meant that rents were due, and so consequently Michaelmas was a ‘flitting day’: tenants often moved to new lodgings and found new employment. By the First Statute of Labourers (1351), a worker could go to be hired at the nearest market town on the day after Michaelmas Day – that is, on 30 September – which was when pay rates were set at the Statute Sessions (sessions were also held at Martinmas, 11 November, and occasionally at Whitsun). Thus fairs held during this period were hiring fairs or ‘mops’, and workers for hire garlanded themselves with the signs or tools of their trade. As Thomas Hardy described it in Far from the Madding Crowd (1874) ‘carters and waggoners were distinguished by having a piece of whip-cord twisted round their hats; thatchers wore a fragment of woven straw; shepherds held their sheep-crooks in their hands’.

Tenants who remained would offer their landlord a customary gift of a goose, a tradition recorded by George Gascoigne three hundred years earlier in 1575:

And when the tenauntes come to paie their quarters rent,
They bringe some fowle at Midsommer, a dish of Fish in Lent,
At Christmasse a capon, at Mighelmasse a goose:
And somewhat else at Newyeres tide, for feare their lease fly loose. (‘Flowers’)

Geese were a reminder of paying quarterly rents and were therefore associated with financial security and good luck in money matters: as the old adage has it, ‘If you do not baste the goose on Michaelmas Day, you will want money all the year’. Jane Austen wrote to her sister in 1813 that she had dined on goose at her brother’s house on Old Michaelmas Day and hoped that this would ‘secure a good Sale’ of the second edition of Sense and Sensibility which was soon to be published.

Geese were traded at St Matthew’s Day and Michaelmas fairs as a winter staple – goose fat being good both for cooking warming winter stews and for keeping out the cold when rubbed on the chest. Nottingham Goose Fair originally ran for three weeks, selling geese for Michaelmas; it now runs for four days at the beginning of October. Tavistock Goosie Fair in Devon was also originally at Michaelmas but is now held on the second Wednesday in October. It is the subject of the renowned dialect song ‘Tavvystock Goozey Vair’ from 1912:

An’ uts ‘Aw thun, whur be ’e gwaine, an’ wot be ’e doin’ of there?
’Aive down yer prong an’ stap down long, tes Tavvystock Goozey Vair.’

[Translation:
And its, ‘Oh, then, where be he going, and what be he doing of there,
Heave down your prong and stamp along, to Tavistock Goosey Fair’;
a ‘prong’ is a pitchfork.]

Such songs about fairs and the produce they sold keep the events in popular consciousness even if they decline in reality. Sadly, live geese are no longer sold at Tavistock because of outbreaks of fowl pest in the 1950s and 1960s.

So at one time, goose was identified with Michaelmas as much as eggs are with Easter today, if not more so. Goose was a patriotic dish too: Queen Elizabeth I was supposedly dining on goose on St Michael’s Day in 1588 when she was informed that the Spanish Armada had been defeated. She consequently decreed that the victory should be celebrated annually thereafter with a goose dinner, which took over from the tendency, recorded in 1512, to dine upon horsemeat.

Michaelmas was also a time to prepare for the winter season in ways other than simply reserving goose dripping. It was the day when horses and cattle were brought down from upland grazing pastures, reflecting St Michael’s strong equine associations. This hearkened back to an ancient farming system based on the managed migration of flocks and herds, pre-dating the large-scale arable cultivation seen in the communal working of common open fields that later dominated the medieval period. It was a day on which to attend to associated chores as well, as the sixteenth-century agriculturalist Thomas Tusser advised:

Tusser also recommends that nuts should not be gathered until after Michaelmas. Likewise, blackberries should not be eaten after Michaelmas because the Devil will have touched them (or even spat on them), and the eighteenth-century Gothic architect Batty Langley advised that winter pears should only be collected after this date. Oak trees cut at Michaelmas could forecast the character of the next year, and according to Izaak Walton, author of The Compleat Angler (1653), ‘about Michaelmas’ swallows ‘leave us for a hotter Climate’, a sure sign that summer is over. Nevertheless, the Michaelmas-daisy (angelica) flowers on this day – although despite its delightfully old-fashioned name it is in fact a native of North America, welcomed to England as evidence of the colonial dimensions of gardening.

Building slowed down after Michaelmas, as did road mending, but some trades picked up after Michaelmas when the harvests were in. Brewers took advantage of the new hops, cider-makers of apples, and candle-making began in anticipation of long winter evenings. Michaelmas was also the ‘lawyers’ harvest’: one of four (now defunct) legal terms and also of the renewal of school, university, and Parliamentary terms. Hence in the seventeenth century ‘Paper, pen, and inke are much in request’ at this time of the year as legal, academic, and bureaucratic cultures are revived. And as students return to university, MPs return to Westminster, and we all begin to prepare for the winter, it would be good to revive goose dinners at Michaelmas. Goose is good stuffed with chestnuts and roasted. Prick the skin thoroughly, and roast uncovered at about 180ºC for 30 minutes per lb, regularly draining off and preserving the fat. A large goose can provide enough dripping for weeks of roast potatoes and fry-ups, and stock made from the carcass is a rich base for winter soups. Local suppliers can be found at British Goose Producers (http://www.geese.cc/) so we may all eat, drink, and be merry at Michaelmas!