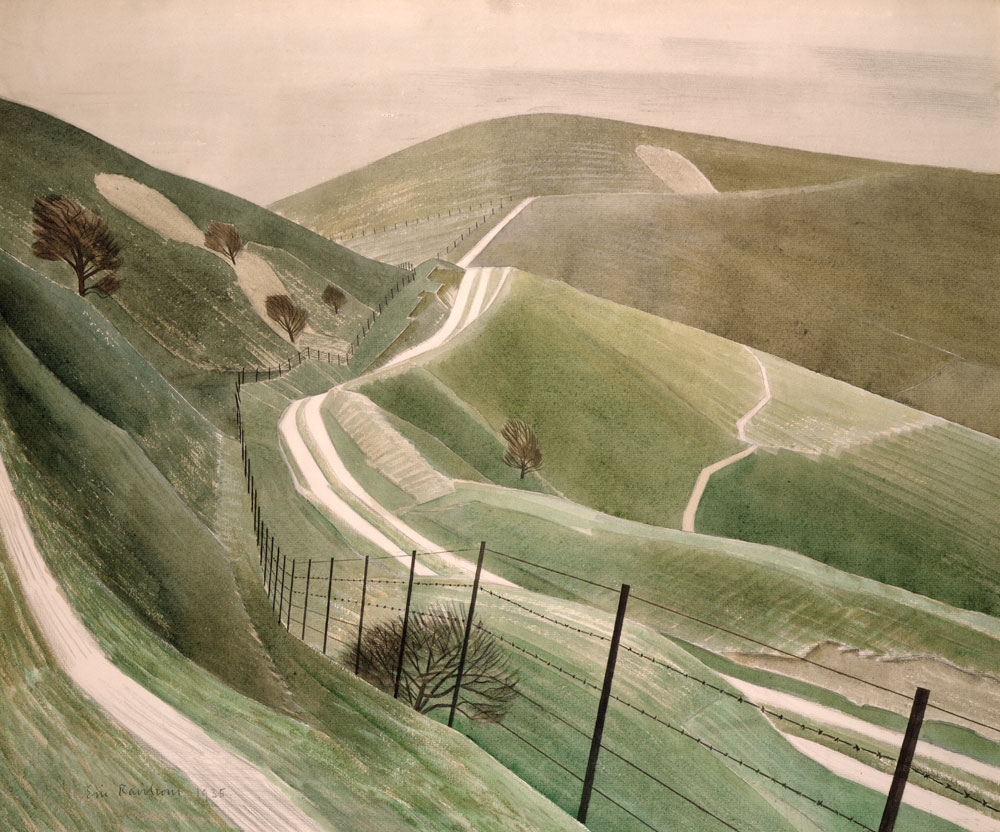 Nige recommends the short fiction of A.E. Coppard – a writer who deserves a revival…

I recently mentioned A.E. Coppard, a writer whose name was unknown to me when I came across it – and seems to be generally forgotten, though a book of selected stories, Weep Not My Wanton, was issued only two years ago by Turnpike Books (a paperback, with Eric Ravilious’s Chalk Paths [above] on the cover – a perfect choice). I have just read this selection and I have to report that Coppard is one very fine short-story writer.

Weep Not My Wanton contains, in a mere 100 pages, seven stories: Dusky Ruth, the sad tale of a subjunctive sexual encounter at an inn; the title story, a horribly vivid vignette of human cruelty; Adam & Eve & Pinch Me, an eerie account of an out-of-body experience; The Higgler, a kind of love story, the longest in the book and perhaps the most gripping of them all; The Wife of Ted Wickham, a surprising character study; The Watercress Girl, a kind of tragic love story; and The Field of Mustard, in which a group of women, out gathering kindling, talk about men.

What these very different stories have in common, above all, is a haunting quality that makes them hard to forget. They are often almost painfully vivid, and always told with a skill that is quite breath-taking. Frank O’Connor called Coppard ‘the greatest of all the English storytellers’ and that, I think, is not far wide of the mark. It seems astonishing, then, that he should be so nearly forgotten – except that the stories have a flavour of their time, at least in the prose style, which sometimes shows signs of a Georgian fondness for strained locutions and ‘fine writing’. But this is incidental, for these are tough, sinewy, clear-sighted stories that never lapse into anything like whimsy or sentimentality; Coppard knew too much of the realities of poverty and rural life for that.

V.S. Pritchett – who admired Coppard hugely – also thought that he was unlucky in being a ‘folkish’ writer at the wrong time:

I don’t think he had any views about life in general, any kind of intellect, but he had a marvellous appreciation of the instant; he could describe a squirrel very well, he could describe a game‑keeper, he could describe a couple of old farmers arguing about whether, beef is better than veal to eat, or what pork is like, and things like that. He had a great decorative sense of comedy. He was unfortunately, when I look back upon it, a rather folkish writer; he came at a period when the peasantry were dead really and they only existed in pockets in England, in little places, and their traditional customs by that time had almost gone. It was when suburbia spread out and the countryside died. That curious old England went out…

Well, that’s true enough, but stories as good, as well crafted and as grippingly told as Coppard’s surely deserve to survive. Try them yourself and see if you agree.

Weep Not My Wanton is published by Turnpike Books, while The Higgler is available for 1p from Amazon.