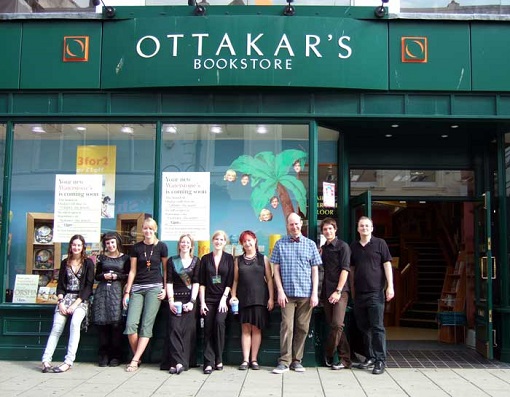 The last day of Ottakar’s, Worthing, before it was converted into a Waterstone’s

Following his pieces about publisher’s sales reps and his first year working in Waterstones, Steerforth completes his book business trilogy by asking: Who becomes a bookseller?…

What type of people work in a bookshop? Are they passionate, slightly unworldly bibliophiles, who live and breathe books? Or are they a bunch of slackers, who break out into a cold sweat at the prospect of having to do a proper job?

During a very dull moment in a waiting room, I tried to remember everyone I’d ever worked with. I got to 200 before my memory started to become hazy. I felt slightly guilty when I realised that I hadn’t given some of my ex-colleagues a second thought since we’d last met, but I expect they’d probably say the same about me.

The weekend staff were particularly hard to remember. The boys, who all seemed to be studying ‘A’ level English, merged into one amorphous blend of earnestness and skin complaints, although there were a couple who amused me by telling dirty jokes (which I then passed on to the reps).

The girls were easier to recall because some of them had recently friended me on Facebook, in a barrel-scraping attempt to pass the 500/1000 friends mark (I quietly ‘defriended’ them after a suitable period, but I doubt that they noticed).

However, they weren’t ‘proper’ booksellers. The weekend staff were merely taking a brief pitstop on their way to a glittering career (at least, that’s what they told me). The idea of becoming a full-time bookseller horrified them almost as much as the thought of their parents having sex.

When I asked one girl what job she wanted to do, she replied: “I don’t know yet, but I do know one thing: I’m not going to work here.” She later became our floor manager.

As for the proper booksellers, in the early days of Waterstone’s, the slackers ruled the roost. For them, bookselling was a continuation of university life, with its constant shortage of money and cramped bedsits; redeemed only by brilliant conversations with like-minded people and long periods of inertia. The hours weren’t as great, but at least you didn’t have to wear a suit.

Anyone who actually wanted to be a bookseller was regarded with a mixture of contempt and suspicion. Was that really the limit of their ambitions?

In hindsight we were probably awful. Our hatred for the customers – those people who dared to interrupt our conversations and ruin our displays by buying the books – was only exceeded by our contempt for a head office who lived in an ivory tower and dared to suggest that we should only stock books that seemed likely to sell. Philistines!

Oddly enough, the customers seemed to like our bolshy attitude and inappropriate clothing, so when one male member of staff decided to create a bondage outfit out of dustbin bags (complete with holes for the nipples) and serve at the till, no-one batted an eyelid.

The till-points of Waterstone’s contained many frustrated writers, artists, teachers and media people, waiting for their dream job to come along. Surprisingly, their hopes weren’t always in vain. After a year of displaying no discernible work ethic or talent, X would effortlessly drift into a key role at the British Council, whilst Y suddenly became a production assistant at Channel Four. How did that happen?

At the end of five years of watching other people move on to better things, I felt that I ought to create an illusion of progress and left to run an independent bookshop. At the time it seemed like a sound move, but I quickly discovered that I was working for the Arthur Daley of bookselling, with van loads of dodgy stock mysteriously appearing on the shop floor overnight. I didn’t want to be Terry McCann, so I started job hunting.

In 1996, a new bookselling chain – which seemed to have risen without a trace – was advertising for managers. After a rather unconventional interview with James Heneage, the managing director, I became a ‘manager-in-waiting’ at Ottakar’s.

Ottakar’s, which was a nationwide chain of smallish shops in market towns, was a revelation. I soon realised that outside London, booksellers were a very different breed. The staff I met actually seemed to take a pride in their work and would happily break-off a conversation if they saw that a customer needed help. I felt as if I had joined a group of evangelical Christians: wide-eyed, enthusiastic and committed. Some of them even wore ties.

I’ve no doubt that the good morale was a reflection of the leadership, but I also noticed that outside London, booksellers were generally more motivated than my former colleagues. They weren’t passing through on their way to something better. Thiswas their career.

Keeping up with such enthusiastic people was exhausting, but I did my best.

At Waterstone’s most of the staff I met were in their 20s and all of them were graduates, as Tim Waterstone refused to employ anyone without a degree (by doing this, he missed out on some very good booksellers).

Ottakar’s was very different, with a mixed bag of people whose ages ranged from 16 to 65. Some of them had degrees, but many had simply joined when they left school or moved across from a completely different area of retail. Sometimes the recruitment criteria were a little too lax, for me at least.

It took a while to get used to seeing a copy of the Daily Mail (or worse) in the staff room and when I spotted well-thumbed copies of novels by Patricia Cornwell and Terry Pratchett, I realised that there weren’t going to be many fist fights for a proof copy of the latest Umberto Eco.

I was at Ottakar’s for ten years and, during that time, came to recognise similar types in every branch I ran or visited. Every shop had its high flyer (usually under the age of 23) who seemed more competent than the manager and was usually destined to be their boss in four years’ time. Some managers felt threatened by them. I just saw an opportunity to take a long holiday without worrying about the shop.

These high flyers were usually counterbalanced by one or two no-hopers who could spend an hour discussing Robert Jordan’s Wheel of Time series with a customer, but still hadn’t unpacked yesterday’s delivery. They seemed to think that promotion was a simple award for long service and could never understand why some young upstart had been promoted over their head.

In Ottakar’s, although the booksellers came from a variety of backgrounds, the one thing they all shared was a genuine love of books and a morbid fear of having to sit at a desk for eight hours a day. Bookselling provided a variety of work centred around something that actually mattered, which was not something that the local call centre could offer.

At my branch of Waterstone’s (which was probably atypical) in the early 90s, the attitude was more cynical. The staff had no loyalty to the company and regarded their jobs as a temporary expedient. They might enthuse over certain titles, but the idea of beingpassionate about all books would have been viewed as absurd. Indeed, neatly hidden away at the till point was a small sticker that said “Books are crap“.

However, in their own way, the arrogant slackers of the early Waterstone’s years were often very good booksellers. Freed from the constraints of the career ladder, completely indifferent to the concerns of area managers, they ordered what they liked. One buyer was chastised by his manager for buying ten copies of a £100 Ansel Adams book, but they all sold within days

Fifteen years on, the new owners of Waterstone’s were keen to turn their backs on an era in which the easiest way to identify a member of staff was to look for the scruffiest person in the shop. Graduates were no longer essential. The main qualification was a passion for selling. To the horror of many, a couple of managers had been recruited from Gap and Burger King!

There was a clear message: we don’t think bookish people are always good at selling. In today’s tough commercial climate, we need proper retailers…

In my darker moments, I wondered if they were right. Perhaps the traditional booksellers were just unemployable misfits who’d enjoyed years of sanctuary in the book trade. However, after three years of ‘retailing’, with planograms, loyalty cards and a staff training scheme called Get Selling, Waterstone’s was on its knees and almost disappeared from the high street, until a Russian oligarch came along and bought the company from HMV.

Today, things have come full circle. Unable to compete on price, booksellers are returning to their traditional role as curators of the huge, bewildering range of books in print. However good Amazon is, they will never be able to match the fiction-in-translation table at the Brighton branch of Waterstone’s.

During the next decade, many bookshops will go to the wall – that much is certain – and booksellers will become an endangered, exotic species. However, the best bookshops should survive (high street landlords permitting).

But to return to the initial question: who becomes a bookseller? Looking back over 20 years of bookselling, I don’t think I could say that there was a typical bookseller. There were some quiet, bookish types (who often left to train as librarians), but there were also louche bohemians, alcoholics, artists, drug dealers, ex-nuns, former policemen, future policemen, writers, rock musicians, reiki therapists, scientists and poker players.

Misfits. All very different, but all round pegs that didn’t fit into square holes. With fewer bookshops on the horizon, things are going to get much harder.

4 thoughts on “Bolshy Slackers and Exotic Misfits: Who becomes a Bookseller?”