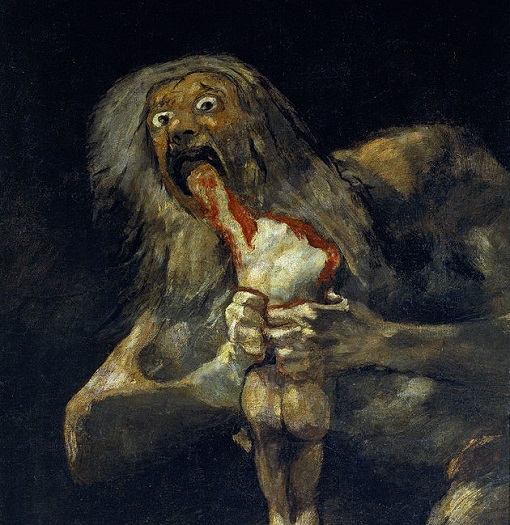 Poems, as we have seen, can terrify children. But what about the pictures we unthinkingly display in our houses?…

At the bookshop years ago I had a colleague named Jefferson who slicked back his hair and wore a black three-piece every day and who claimed that in his childhood living room was hung a large framed reproduction of Goya’s Saturn Devouring His Son (above).  It was a favorite of his mother’s, he said.

Images have consequences.  Staring at that picture over the hearth every day might lead one to question parental intentions.  Father’s dinner table enthusiasm for chops or roast turkey, for example, might take on frightful overtones.  I took Jefferson’s biographical datum as a partial explanation for Jefferson himself.  He was not a standard-issue sort of fellow.  Clearly he’d been inoculated against normalcy early on.

As a boy I questioned my parents’ intentions toward me too.  I believed for a while that I was the last true human being left in the world and that my parents were, in fact, alien robots in skin suits, biding time till I could be conveniently liquidated to make room for a robot boy in a skin suit who would take my place.  I had to be vigilant.  Several times at breakfast I asked my father whether he would admit to poisoning my bowl of Shredded Wheat.  He would not.

Were there pictures in the house to explain my fears?  I don’t recall any framed photos of robot impostors.  Probably it was the television, too much Battlestar Galactica or Land of the Lost or V.  What we did have in the house was a flock of macramé owls.  Once I’d been done away with to make room for the robot boy, how dreadful to be wrapped up and buried in a macramé shroud.

In fact, there was one very odd painting in the house, the work of my mother’s cousin.  I own it now.  It shows an ocean of choppy waves extending to the horizon, nothing more.  It might have made a suitable setting for an old-fashioned frigate or schooner tacking in the wind, but the ship got left out.  There are only waves.  What is it intended to depict?  Chaos?  Infinity?  Just the regular old sea?  Or perhaps the primordial Miltonic sea a moment or two before the Holy Spirit “with mighty wings outspread / Dove-like satst brooding on the vast abyss?”  It doesn’t explain the alien robots in skin suits, but it might explain the first story I ever wrote, about a cruise ship foundering at sea and a boy floating alone in the blue immensity.

I wonder how my children have been affected by the pictures in our home.  There’s the kitschy Keane-esque painting of a little girl with big eyes crying serenely in a dark hallway.  There are the little framed phobias: Fear of Birds and Fear of the Dark.  There’s the wooden icon of the Forty Martyrs freezing to death on a lake of ice.  And then there’s the framed print of Edward Gorey’s Gashlycrumb Tinies, an alphabet of gruesome deaths of children.  Can any good come of this? 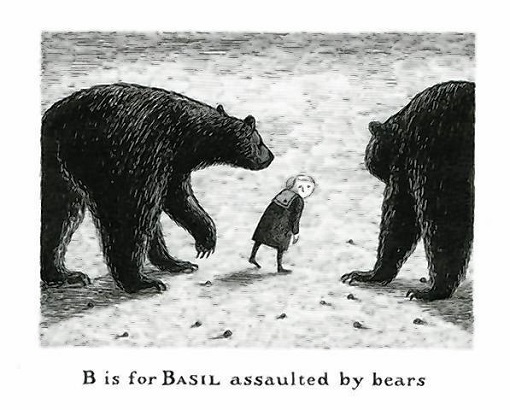 One thought on “B is for Basil, Assaulted by Bears”