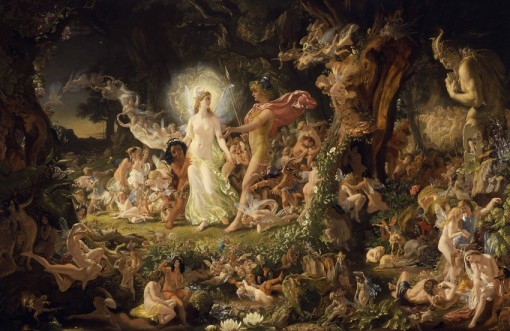 Today is midsummer, and Professor Nick Groom turns his attention to the woods. Trees are a special part of our national identity, and they need us as much as we need them…

Woods occupy a special place in the imaginative topography of England. The greenwood is the haunt and habitat of Robin Hood, the contested pastoral setting of the Forest of Arden in Shakespeare’s As You Like It, and a way into Faërie in A Midsummer Night’s Dream. These woods are not the dark fir-forests of Teutonic myth and Grimms’ fairytales, but the spacious, sunny, broad-leaf, deciduous woods of middle England.

The reason why English woodland is so open, verdant, and young is because for at least a thousand years England has had comparatively little woodland – certainly much less than the rest of northern Europe – and has consequently had to manage it carefully – as Oliver Rackham points out in his charming book Ancient Woodland: ‘By the thirteenth century AD woodland management was a fully-developed art with conservation as its chief objective.’ There was, in other words, no vast Hercynian Forest across Anglia, Mercia, and Wessex, and what existed was not an idealized and aesthetic landscape but a dynamic working environment that was planned, cultivated, and maintained. Some English forestry initiatives only therefore date back to the eighteenth and nineteenth centuries, the result of picturesque schemes to ‘improve’ scenic prospects or ‘restore’ imagined primal woods, such as the fabled Anderida Forest across the south of England.

There is, however, a strong appeal in planting trees, and it is important not to let the poison of the picturesque taint serious ecological conservation projects. Supported by the Woodland Trust and in an attempt to renew habitats and create more bio-diverse local environments, I have helped to plant hundreds of trees; it is humbling experience and I can only agree with Joseph Addison who on 31 May 1712 wrote that ‘the love of woods seems to be a passion implanted in our natures’. I planted with scouts and guides, but also with people nearly twice my age: they would never live to see these trees give shade for them to walk under – but then that was the point. Planting trees is a gift to later generations, a bequest of woodland charm. From the ardent Londoner Samuel Johnson to the peasant poet John Clare, English woods possessed a kind of magic. Hester Lynch Piozzi wrote of Johnson that, ‘Walking in a wood when it rained was, I think, the only rural image he pleased his fancy with’. Clare, on the other hand, wrote ‘Wood Rides’, an uncharacteristically sentimental poem in which the practicalities of the wood are blurred into a sort of ‘woodland ethnicity’, the poet careless of the flowers at his feet:

Woods can help us to overcome the trite expectations of the picturesque that are almost indelibly impressed in our culture. In his essay ‘Forest’ (1885), Richard Jefferies’ depiction of the autumnal woodland scene commences predictably enough, but then we are refreshingly reminded that this is a working, economic environment – and so much the healthier for that:

The soft autumn sunshine, shorn of summer glare, lights up with colour the fern, the fronds of which are yellow and brown, the leaves, the grey grass, and hawthorn sprays already turned. It seems as if the early morning mists have the power of tinting leaf and fern, for so soon as they commence the green hues begin to disappear. There are swathes of fern yonder, cut down like grass or corn, the harvest of the forest. It will be used for litter and for thatching sheds.

Trees are good to think with, they are gateways that lead us into understanding our environment and our identity. They are understandably writ large in the story of the nation, most clearly in the Navy’s insatiable demand for timber for shipbuilding, but also in more subtle and cultural ways: in half-timbered houses, in the stone foliage that effloresces in the Gothic architecture of churches, in the dark myths of Yggdrasil and the Tree of Knowledge. Not for nothing did the English identify with the oak tree, as eighteenth-century sailors sang with such gusto that ‘our castles of wood stand like castles of brass’ in their triumphalist anthem ‘Heart of Oak’:

This legacy haunts me as I walk through the woods, the trees trembling with meaning, as it is a legacy under perpetual threat. As early as 1956 the Forestry Commission’s scheme of supporting coniferous plantations was being heavily criticized in the Architectural Review as being ‘as deadly as any industrial squalor of the 19th century’ – in other words, comparable to factory developments. Our landscape is defaced where it most aspires to be natural, and we are cut us off from our history and from our culture. The conservation of woodland lies instead in older traditions of managed, indigenous forestry: the trees need us as much as we need them.

One thought on “A Walk in the Woods in Midsummer”