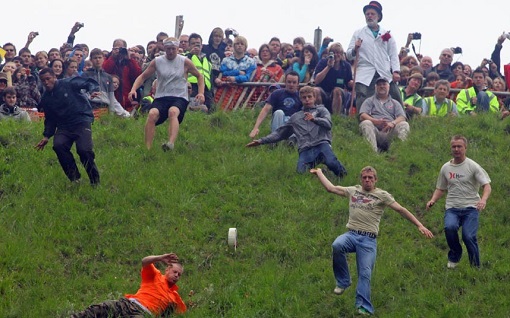 From speaking in tongues to cheese rolling in Gloucester, this month Professor Nick Groom looks at the origins, customs and meaning of Whitsun…

Whit Sunday is the seventh Sunday after Easter, also known as ‘Pentecost’ (from the Greek for fiftieth, counting inclusively). It is therefore part of the cat’s cradle of Eastertide dates – part of the Paschal micro-season – and this year will fall on 8 June. In the New Testament, the date was significant as the celebration of the manifestation of the Holy Spirit through the Apostles:

And suddenly there came a sound from heaven as of a rushing mighty wind, and it filled all the house where they were sitting. And there appeared unto them cloven tongues like as of fire, and it sat upon each of them. And they were all filled with the Holy Ghost, and began to speak with other tongues, as the Spirit gave them utterance. (Acts 2: 2-4, 13)

For this feat of speaking in tongues, the Apostles were accused of being drunk on ‘new wine’. Nevertheless, this new knowledge or ‘wit’ has been proposed as the origin of the word ‘Whit’. Other suggestions are that the day was once Witentide, the day of election to the Saxon parliament, or Witenagemot, or that it was ‘White Sunday’, the day on which landowners gave milk to the parish poor. The Anglo-Saxon Chronicle for 1067 refers to ‘hwitan sunnan dæg’ (‘White Sunday’), and the Old Norse form hvítasunna also means ‘White Sunday’. Rather than milk, however, the colour probably refers to the white gowns of those who offered themselves to be being baptized on this significant day.

The Church looms large in the history of Whitsuntide. Whit walks (or simply ‘Whits’), in which church congregations processed through the streets in their best clothes, were popular, and payments of ‘Whitsun farthings’ were often made to churches for repairs. Parishes also held Whitsun Church Ales across Whitsuntide from Whit Monday to Whit Wednesday, to raise money for charity. Whitsun was a popular holiday because of the likelihood of good weather (good weather on the day promises a good harvest), and these festivities tended to be organized affairs. Church Ales became a focus for parades, fairs, markets, circuses, cricket matches, regattas, displays of archery practice, and country sports such as wrestling, climbing the greasy pole, and even sack races and donkey derbies, and of course Morris dancing: Shakespeare mentions Whitsun Morris dancing in Henry V (II.iv.25). Miracle and Mystery Plays were performed, as at Chester (again mentioned by Shakespeare in The Winter’s Tale, IV.iv.134). Hats festooned with flowers might indicate that a wrestling match was to take place, while bushes outside the door of a house advertised that ale was available within. A broadside poster from 1758 advertised events to be held in Sunbury in Middlesex:

On Whit Monday, in the Morning, will be a Punting Match on the usual Terms. The first Boat that comes in to receive a Guinea. . . . In the afternoon a Gold-laced Hat, Value 30s. to be cudgell’d for.

On Whit Tuesday, in the Morning, a fine Holland Smock and Ribbons, Value One Guinea, to be run for by Girls or Young Women. And, in the Afternoon six Pair of Buckskin Gloves to be wrestled for. No entrance Money required.

Milk and cream were seasonal fare for Whitsun feasts, as were gooseberries and cheesecakes, and regional food was celebrated, from squab pie in Cornwall to mutton pie in Oxford, to local cakes. As at Easter, it was good luck to wear new clothes at Whitsun, which added to the festivity and colour and general extravagance (it was bad luck to cut one’s nails).

Church Ales did tend to be festivals of excess and misrule. As John Marston put it in his 1601 play Jack Drum’s Entertainment, ‘Tis Whitson-tyde, and we must frolick it’. They were presided over by the Lord and Lady of the Ale, with various other offices, often including a jester, and often acted as a jolly reprise of May Day revels, the maypole being once again the focus of communal dancing. As John Taylor noted in his social satire Pasquils Palinodia (1619), ‘Happy the age, …When every village did a May-pole raise, And Whitson-ales, and May-games did abound’. Puritans, of course, attacked the dancing, and even the tradition of collecting greenery, seeing in merry-making and the celebration of nature only devilry and debauchery. Philip Stubbes, for instance, expostulated against both May Day and Whitsunday habits of visiting woods and ‘bryngyng with them Birch, Bowes, and braunches of Trees, to deck their assemblies withal’. Undaunted, the seventeenth-century poet Robert Herrick advised bringing birch sprays and flowers into the house for Whitsun:

When Yew is out, then Birch comes in,

And many flowers beside;

Both of a fresh, and fragrant kinne

Green Rushes then, and sweetest Bents,

Come in for comely ornaments,

There was even a seasonal bloom, the Whitsun gillyflower, a double-flowered variety of rocket (Hesperis matronalis).

Some locales developed more idiosyncratic revels. Robert Dover’s Olimpick Games have been running on and off from about 1611, with occasional interruptions due, for example, to the Civil Wars. The event was most recently in 1966 and continues to this day, including tug o’ war, a five-mile cross-country race, the Championship of the Hill (which consists of throwing the hammer, putting the shot, standing jump, and spurning the barre), and the ever-popular shin-kicking. Whit Monday was also the traditional date for cheese-rolling at Cooper’s Hill, Brockworth in Gloucestershire, an event that continues to this day. Cheese-rolling is believed by some to be a rather surreal way for villagers to exercise their ancient grazing rights on the common, while others suggest its equally fanciful origins as a midsummer activity connected to rituals that sought to preserve the rays of the waning sun, akin to midsummer bonfires. Pseudo-pagan mysticism aside, cheese-rolling could just as easily be a riotous celebration of the season’s fresh cheeses, which are ready in May. Scandalously, though, in 2013 the 86-year-old cheesemaker Diana Smart was advised by the police, no less, not to donate her Double Gloucester cheeses to the cheese-rolling, lest she be liable for injuries suffered by participants. Since then, an artificial cheese has been used. Such meddling by petty bureaucrats in the quirky customs of England is, frankly, despicable, and they should be ashamed of themselves. It is a choice one should be free to make if one wishes to hurtle down precipitous slopes in pursuit of locally made dairy products.

But of course Whitsun itself has already been all-but erased by the officious restyling of the calendar. Whitsun was made a Bank Holiday in 1871 as part of the first Bank Holidays Act, which allowed the Bank of England to close on certain days, meaning that bills and promissory notes were payable on the following day without being penalized. Christmas Day and Good Friday were already established, to which the Act added Easter Monday, Whit Monday, the first Monday in August, and Boxing Day. However, after being trialled from 1967, the Banking and Financial Dealings Act of 1971 replaced Whitsun with the Spring Bank Holiday as the last Monday in May. This was ostensibly because Whit Monday could fall on any day between 11 May and 14 June, but it is by such formulaic legislation that the nation is cut off from its past, its customs, and the cultural calendar. And so the year loses another part of its frivolity and its focus. Cheese-rolling now takes place on Spring Bank Holiday, while the Olimpick Games will be held this year on 30 May. True, that does mean that one can attend both, but imagine celebrating Whitsun in all its traditional glory: this year we would have four days of carousing, from the eight to the eleventh of June. I wish you all a merry Whitsuntide.