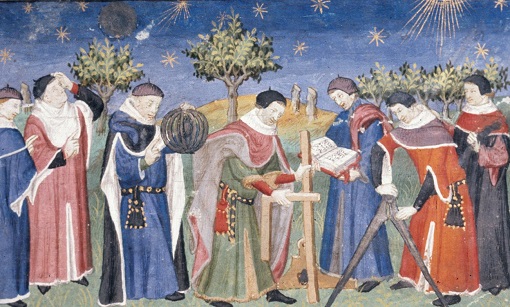 Ever wondered why the date of Easter is so unpredictable? Professor Nick Groom explains the bewildering mathematical equations required to calculate Easter, and why our day-to-day lives are still to some degree governed by theological arcana…

Saturday just past was Egg-Feast Saturday – the time for eating up eggs. The Sunday following was Quinquagesima, meaning that there are about fifty days to Easter. Yesterday was Collop Monday, the last day for cooking meat – usually bacon and eggs. And today is Shrove Tuesday or Pancake Day – cooking with eggs, flour, and milk, and also a fine opportunity for Morris dancing. Tomorrow is Ash Wednesday and the beginning of Lent – which is what all this ‘Shrovetide’ is about: eating up certain foodstuffs before forty days of fasting.

Lent was (and for some still is) a lean period, a term of abstinence: no meat, eggs, or dairy products; and also no consummation of marital or sexual relations. Hence the revelry of Shrovetide and the almost supernatural excitement afforded by pancakes: according to the seventeenth-century poet John Taylor these are prepared by ‘sulphury Necromantic Cooks [who] do mingle with water, eggs, spice, and other tragical magical enchantments, and then they put it by little and little, into a frying pan of boyling suet, where it makes a confused dismal hissing (like the [Hydra]), until at the last by the skill of the cooks, it is transformed into the form of a flap-jack, which in our translation is called a pancake, which ominous incantation the ignorant people do devour very greedily’. Bear that in mind when you are tossing your pancakes this evening.

After the devilish seductions of the pancake, the most salacious sweetmeat on offer for the next forty days was simnel cake – spiced fruit cakes with currants and almonds, sometimes decorated with eleven balls of almond paste to represent the eleven Apostles. I’ve no doubt that these more than made up for the prohibition of meat, eggs, dairy, and especially carnality. It is true that over time the rules of Lent were slightly relaxed – in 1538, for instance, Henry VIII permitted the consumption of dairy products – but meat continued to be forbidden until well after the Reformation as the increased demand for seafood was an annual boost for the national fish-trade.

In the Western tradition, then, Lent begins at midday on Ash Wednesday, which is forty days before Palm Sunday (being the Sunday before Easter), and finishes in the afternoon on Maundy Thursday (at ‘nones’, the ninth hour, or 3pm). In the Roman Catholic Church, however, Lent does not finish until Holy Saturday (Easter Saturday). And anyone who can be bothered to do the calculations will realise Lent is actually therefore forty-four or even forty-six days long: this is because Sundays are technically not part of Lent. Does this mean that the faithful are permitted to break their abstinence every Sunday during Lent? Moreover, a handful of popular saints’ days that fall within Lent have also been exempted: the Feast Days of Saints Thomas Aquinas, Gregory, Benedict, and of course Patrick. So you can forgo alcohol for the period of Lent, but still partake of ‘Patrick’s pot’ at the ‘cóisir leanna’ (or ‘liquid banquet’) on 17 March. Sláinte!

This number-crunching around Lent is, however, small fry compared with the hair-raising calculations that determine the timing of this mini-season. The first day of Lent can vary from 4 February to 11 March, so it is very late this year. And this, of course, is because Easter itself is very late this year – Easter Sunday being 20 April, almost ‘ultimum Pascha’, as the latest date on which it can occur is 25 April. In contrast, Easter can be as early as 22 March, something we will probably have to wait until the year 2285 to witness.

The restlessness, even apparent randomness, in the timing of Easter and all the other dates that depend on it is clear evidence that our calendar is alive and kicking, disruptive and unpredictable – although most of us seem to accept the timing blindly and simply let diaries, the sale of Easter eggs, or television schedules prompt us towards the correct date. But the finespun complexities that cause Easter to fall on any day within virtually a five-week period are worth teasing apart, as they are a reminder that our day-to-day lives are still to some degree governed by theological arcana that have invested this time of the year with profound meaning. Whether one is Christian or not, the year still reverberates with the history of the Church’s calendar.

We begin with the Gospels, in which Christ’s Resurrection was recorded as occurring during the Jewish Passover festival – a festival that lasts about a week and which is determined by the Jewish lunar calendar: that is, by phases of the moon. All the witnesses agree that Passover is significant and that Christ was crucified on the day before the Sabbath; consequently He rose on a Sunday, the first day of the week according to Jewish reckoning. But while Matthew, Mark, and Luke claim that this was the first Sunday after Passover, John calculates a different day based on the fact that Jesus’ trial would have been held outside of Passover. All this is challenging enough, but becomes an almost intractable problem when one realizes that the Jewish lunar calendar did not correspond with the Roman ‘Julian’ calendar (the solar calendar observed in England until 1752). This is because lunar calendars run faster than the solar year – which is why Ramadan, also calculated by lunar months, seems to accelerate, taking place earlier and earlier each year. Furthermore, the Jewish lunar year was also in the habit of occasionally adding extra leap months to bring it back into synchronization with the farming year, in which the most significant fixed calendrical point was the moment at which the barley harvest ripened.

All this means that retrospective dating according to the Roman calendar of the trial and execution of Jesus is impossible. Once the need to a date became pressing in ordering the festive year, the most obvious solution to calculating the appropriate day on which to celebrate the Resurrection would have been for the Christian Church to have adopted the Jewish lunar year. But inevitably there was a strong antipathy against using another faith’s calendar. And as the sights of the Christian Church were increasingly set on secular power as much as on sacred authority, it was clearly pragmatic to work with the established Julian calendar as far as possible. But the Julian calendar could offer no clue in establishing a date for Easter. So a brilliant compromise was reached, combining the Roman calendar, the solar year, and the lunar month. The spring equinox became the starting point for calculating Easter – the spring equinox being a turning point in the solar year, occurring around 20 March. To this solar date in the Julian calendar was added the detail of Passover to define Easter as the Paschal Sunday – the first Sunday after the first full moon after the equinox (footnote: unless this occurred at the beginning of the Jewish Passover). The evidence of the Gospels was therefore squared with the cycle of the solar year and the practical need to fix a precise date in the Julian calendar.

If you’ve followed thus far, I’m afraid that that’s only the theory. In practice, it proved very difficult to calculate the relationship between the vernal equinox and the phases of the moon due to minor variations in solar and lunar years, not to mention the gradual drift of the Julian calendar itself, which is eleven minutes slower than the solar year, meaning that the equinoxes and solstices gradually fall out of alignment – hence the Julian calendar has nearly everywhere now been superseded by the Gregorian calendar, which takes these eleven rogue minutes into account.

All of this means that the calculation of Easter is a gruelling mathematical trial. Today, Catholic astronomers rely on a fourteen-step algorithm to predict Easter; they can do so with a high, but not an absolute, degree of accuracy.

There are alternatives. In 1928 the British government discussed fixing the date of Easter to between 9 and 15 April on the grounds that the weather would be better during this period, despite all evidence being to the contrary. Amazingly, the Act was passed; however, it has never been ratified by the World Council of Churches, and so has never seriously been put into effect. The more hard-headed among us may prefer the decision of the killjoys of the Long Parliament in 1647, who simply banned Easter in England. But perhaps in the twisting contortions of Easter calculations and the long shadow they cast back to Pancake Day we should be reminded that dates and calendars are only contingent and approximate, and that there are more important things in heaven and earth – such, as my daughter is quick to point out, as Easter eggs.

4 thoughts on “The Seasons: Lent, or How to Count to Forty”