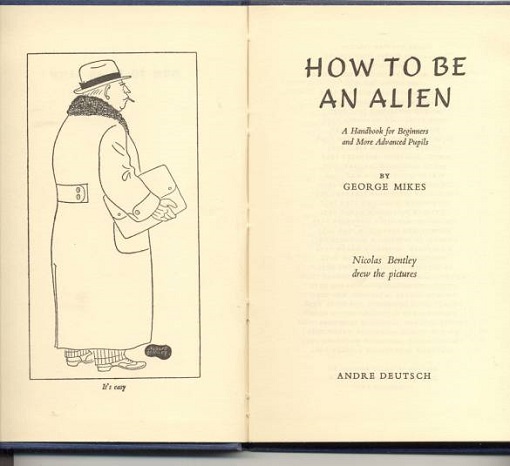 The Hungarian-born British writer George Mikes (15 February 1912 – 30 August 1987) is best known (if he is remembered at all) for his gently humorous foreigner’s-eye view of the English, How to Be an Alien.

First published in 1946, it went into innumerable printings (my copy is the 23rd impression, from March 1957). ‘This book,’ says Mikes on the dust-jacket flap,

is meant for those who see the funny side of life and to help those who can’t see it, but chiefly it is intended for xenophobes and anglophobes. The author, Mr Mikes (pronounced “me-cash”), has been a keen observer of the behaviour and misbehaviour of foreigners and natives in this country and is happy to give all and sundry the benefit of his research. Chapters on hypocrisy, language, sex, tea, the soul, the weather, rudeness and simple joys are just a few results of his vast investigations.

The chapter on Sex is the shortest:

Continental people have a sex life; the English have hot-water bottles.

Soul is something foreigners have and the English don’t need: ‘The English have no soul; they have the understatement instead.’ Mikes is very good on English understatement – a form of expression that is in retreat in today’s more emotionally incontinent times – but he acknowledges that

Overstatement, too, plays a considerable part in English social life. This takes mostly the form of someone remarking: “I say…” and then keeping silent for three days on end.

As a portrait of English life it is, of course, very much of its time; this is a lost England of stiff upper lips, scrupulous politeness and strong social codes. In a few places, though, it is strangely prescient, as when Mikes advises foreigners who wish to fit in to ‘start eating porridge for breakfast and allege that you like it.’ Nowadays everybody seems to eat porridge and claims to enjoy the experience.

The best thing about How to Be an Alien, though – as with so many other titles – is that ‘Nicolas Bentley drew the pictures’. This brilliant illustrator makes any book embellished by him well worth a look – and he was on top form with How to Be an Alien. 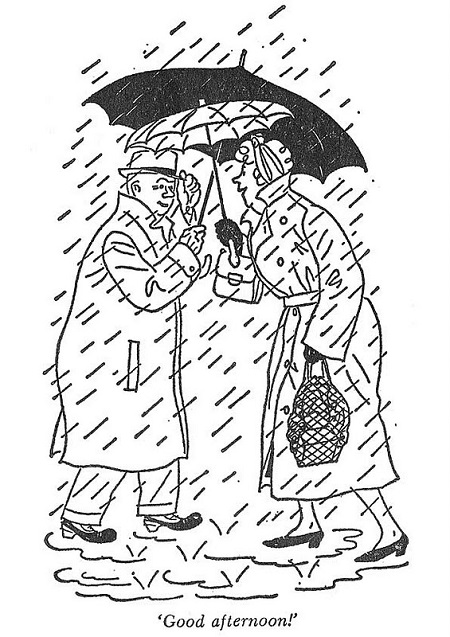 3 thoughts on “1p Book Review: How to Be an Alien by George Mikes”