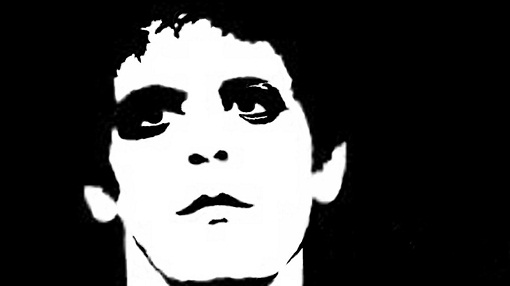 Douglas muses on life, death and the meaning of Lou Reed …

You might have mistaken the cars out the window for lumps of sugar. A series of winter storms had come down from the Gulf of Alaska and dropped enough snow on Seattle to enforce a five-day hibernation. Queen Anne Hill, where I lived, was cut off like an iceberg, its steep slopes sheathed in ice. No one went to work. Public buses were stopped. Truck deliveries were impossible. Soon the local grocer began to run out of food. My roommates and I listened to David Bowie and the Velvet Underground and drank Jim Beam and marveled at the transformation of the world outside. It was like a little holiday with a faint specter of starvation. That night I dreamed that Bowie circa 1973 was cooking a meal for us. The cupboards bare, he dropped armloads of colored felt puppets into a vat of boiling water. We would dine, he said, on puppet stew.

That must have been in 1996 or ’97, I’m not sure which. I was a few years out of college, poor and single and working at the bookshop. Back then I lived almost entirely on spaghetti and bagels, Bowie and The Velvet Underground. Seattle was still vaguely famous for its “grunge” music, but I was more interested in the music of my parents’ generation. Not that my parents ever listened to David Bowie or Lou Reed. In the sixties and seventies they had been more interested in The Beatles, Donovan, Simon and Garunkel, and The Mamas and the Papas. But my roommates and I kept The Velvets’ entire discography, and Bowie’s from Space Oddity to Diamond Dogs, on near-constant rotation. When working the front counter at the bookshop I listened to the same.

The obsession – though not the enjoyment – began to wear off. I started exploring jazz from the fifties and sixties (Davis, Coltrane, Mingus, Chet Baker, and Dave Brubeck) and modern Eastern Bloc composers (Gorecki, Schnittke, Ligeti, Arvo Part, and Peteris Vasks). Most of the latter I can’t bear anymore, having retreated to the more gratifying Baroque period – the music of which, along with a broader sampling of jazz artists, makes up most of what we play at home these days. This past Sunday, however, after hearing of Lou Reed’s death, I listened with deep satisfaction to an old Velvet Underground disc while washing the dishes. The leaves were piling up outside and things suddenly felt melancholy. I don’t know why we should be affected by the deaths of artists, most of whom are strangers to us and haven’t produced memorable work in years, but sometimes we are affected, a little.

Lou Reed was one of a handful of aging popular musicians whose passing might mark something for me. The others include David Bowie, Ray Davies, Bob Dylan, Tom Waits, Leonard Cohen, and Paul McCartney. Like any good parents, my wife and I have tried to raise our kids to appreciate rock and roll of the sort they made. So far we’ve failed. Our son, age ten, is a rather good violin player. He’s been taking lessons for four years now and practices an hour each day. Mondays he plays with a local youth chamber orchestra. My daughter, eight years old, is showing some promise with the piano. I can’t even read music, so their achievements are, to me, miraculous. But they absolutely hate – detest – rock and roll. I expected to raise music snobs, but not this kind. I’m Beginning to See the Light came on while I was finishing up the silverware. You can imagine my dismay when both son and daughter covered their ears and stomped off to the bedroom to blast Tchaikovsky’s Violin Concerto in D major.

6 thoughts on “Beginning to See the Light”