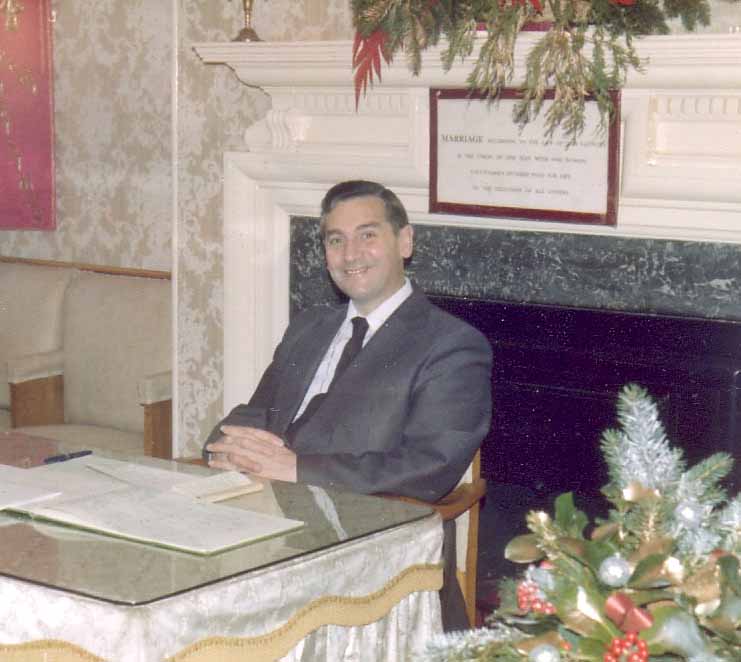 A few years ago bookseller Steerforth came across a remarkable diary, which he began to publish on his blog and which we now serialise on The Dabbler. In the opening instalment Steerforth introduced Derek, a local government officer, married to Brenda, with three daughters and a teenage son Richard. Later we get an extraordinary narrative and some dramatic events, but over the next few posts, Steerforth builds a picture of Derek with snapshot excerpts from some five decades’ worth of journals…

The day is cold and gloomy, though dry. I spent the morning repairing one of my temple garments; I also hit the street to renew a book at the library and also buy some oats and peas for the rabbits. While I was in the shop, a man in motor cycle gear asked me if the oats were for rabbits. He spoke curiously. Anyway, he then ordered two pounds of mixed molasses. I asked him if they were for a lion. The girl serving us broke into laughter; he did not.

I repeated my fatuous remark. He then said “I do not understand what you say. I am deaf.” No answer to that!

The above is an extract from Derek’s diary of 1988, when he was in his late fifties. Bikers were obviously a problem for Derek. On another occasion he wrote:

The town has been invaded by thousands of scooter bikers, many of them as shorn and decorated as Lamanites. There have been a few dozen arrests already. As I went to catch the bus this morning, one was wandering about wrapped in a purple blanket, his blond moll in tow. They were seeking breakfast without too much success at that hour of the morning. While I was standing in the bus station they dragged themselves by. After a while they returned. The lad was shouting at his moll ‘How stupid! Fancy thinking we’d find them in a f*****g coach station!’ He was not a man I would introduce to my daughters.

Over the weekend the town has been full of “bikers”, scooterists from all parts of the country, who foregather in the open spaces and spend their time drinking endless cans of lager.

This would have been a perfectly innocuous sentence, but it is the addition of such words as ‘scooterists’ and ‘foregather’ that inject a Pooterish element into Derek’s prose…

We wasted our home evening last night by watching part of the Sound of Music. Despite our many watchings the magic of this film remains, in spite of the fact that Sue draws our attention to details that are best left unnoticed, such as Julie Andrews wet armpits in one dress. And there is a lovely scene where Christopher Plummer calls Julie Andrews ‘captain’ instead of ‘Fraulein’, a line fluff that the filmmakers have kept in, and a wise decision it was.

I bought Brenda a record yesterday: the theme music by Vengalis (sic) from the film “Chariots of Fire”. Marvellous music it is – the sort that fills one with heroic visions and deep thoughts that bring tears. We like it very much.

One of the curious things about Derek’s diaries is how normal and mundane they can seem until suddenly, without any warning, he’ll casually mention that he is stocking up on tinned food because he is expecting the End Times.

Satan came to me last night in the form of Edward Chave. When I brought up the question of him boring his children…he rose to his feet, put on his hat and stormed out of the house.

This seems to be the prism through which Derek views the world. When some local boys vandalise a playground, it is sign of Satan’s growing power:

When it comes to having an evil brood of children, Mr Supter’s two adopted children must surely take the prize. They fulfill to the letter the Apostle Paul’s prophecy about children in the last days being “disobedient to parents and without natural affection”.

These aren’t the only troubles Derek has with his neighbours:

Last Saturday when I was in the garden, Richard decided that we ought to make a gift of some of our rhubarb to Mrs Reames. He pulled out a stick and proferred it to her. All though it had not been my intent to bless her, I did not want to seem mean so I gave her a dozen sticks. I then took the opportunity of discussing her youngest son with her. He has been coming out of her flat then leaping over our side wall to get out to the road via our gateway. I suggested to his mother in the kindest way that it was possible that my foot might come in violent collision with his crutch if he did not desist. He seems to be desisting.

He is also an incurable hypochondriac, suffering an endless succession of minor complaints:

I have a headache and I am tired. And flies, black flies, are killing my gladioli. They are laying their eggs inside the flowers as the devil lays temptation in a man’s mind: both are destructive.

Brenda came to me. For a while we lay upon the lawn, but decided to evacuate when a caterpillar crawled onto my hand. Brenda hates insects. So do I.

While browsing the diaries I’d been gradually building a picture of Derek’s life. I knew where he grew up, how he fell in love with Brenda and left the Midlands to enjoy a new life in the West Country, but there was one thing that kept nagging. On the strength of Derek’s diary entries, he enjoyed a good relationship with his son Richard and they enjoyed many activities together, but I couldn’t help feeling that something was missing. Then in one entry I found the answer:

Richard is, despite his handicap, a witty lad who comes out with some priceless remarks on many occasions. Last saturday morning, he came into our bedroom and had his usual preoccupation with death. As we discussed the matter, i pointed upwards and told him that he was too young to go up there. Quick as a flash he said “up on the moon?” later in the same discussion he said, “i want to go up where jesus are.” you and me both, son!

Sometimes we go a little mad and, hand in hand, leave the house by the back door and walk down the street to the front door and there ring the bell persistently until brenda or her mother answers. We did this on Satuday morning in our slippers. As we were walking down the pavement, he burst out laughing, and when i queried the matter said “look at my feet”. I did, and they were slipperless. I looked back up the street; and there the slippers were sitting in the middle of the pavement like a couple of orphans.

Though he demands much patience, one cannot imagine life without him. He is a joy and delight in so many respects. We love him dearly. We have been well-blessed in that his health is not the problem that it was. Even so, his life is a precarious one. We thank the Lord for him from day to day.

When Derek wrote this entry, Richard has just celebrated his 20th birthday.

Next time: Derek on work, creative writing and being a Mormon Bishop.